Staying home helped keep kids safe from COVID-19. But it put LGBTQ youth in a different kind of danger.

As the COVID pandemic tore through the U.S. last year, many young Americans were forced to stay home or return to their parents’ houses. But while home was intended to be a safe haven in a year of unprecedented uncertainty, that wasn’t the case for many LGBTQ youth, according to youth, advocates, and the results of a survey released by the Trevor Project on Wednesday.

The survey found that for many of the nearly 35,000 LGBTQ youth between the ages of 13 and 24 who responded to the survey, the past year had a significant impact on their mental health. Forty-five percent of those who took the survey were youth of color.

Eighty percent said COVID-19 made their living situations more stressful. Approximately two-thirds said they were living in homes that are not LGBTQ-affirming, and 70% said their mental health was “poor” most of the time or always during COVID-19.

More than 40% said they seriously considered attempting suicide in the past year, including more than half of transgender or nonbinary youth, the survey found. The percentage of youth seriously considering suicide has remained relatively constant over the past three years, the Trevor Project said. 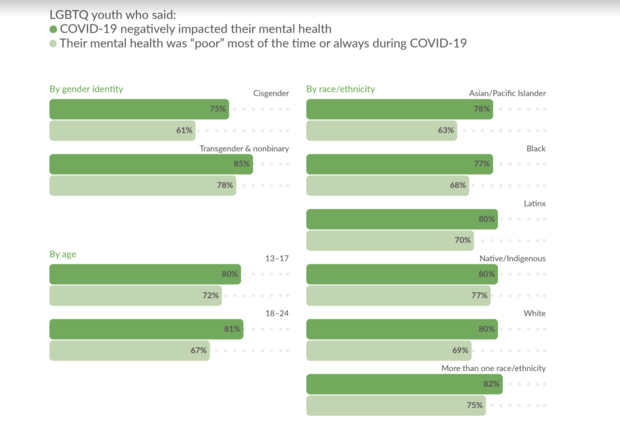 “LGBTQ young people faced all of the same pressures and challenges that the general population faced — the challenges of not being able to physically interact with people, the fear of your health and safety being impacted, the financial consequences of what was happening in the economic downturn…however, the challenges were exacerbated for LGBTQ young people because of the unique stresses they face because of their sexual orientation and gender identity.”

Paley said many LGBTQ youth “have been trapped” in a house with families who are not supportive of their identity, and in some cases, are emotionally or physically abusive.

One of the many young adults who had to move back home is 23-year-old Grace, who lives in New England. Grace, who is transgender, said she was going to school and working when the pandemic hit.

Grace had been independent for two years. But then in March 2020, Grace lost their job due to the pandemic, and within months had to move in with their parents.

Grace’s situation is not uncommon. Nearly 40% of LGBTQ youth who had a job reported that they lost it during the pandemic, according to the survey. 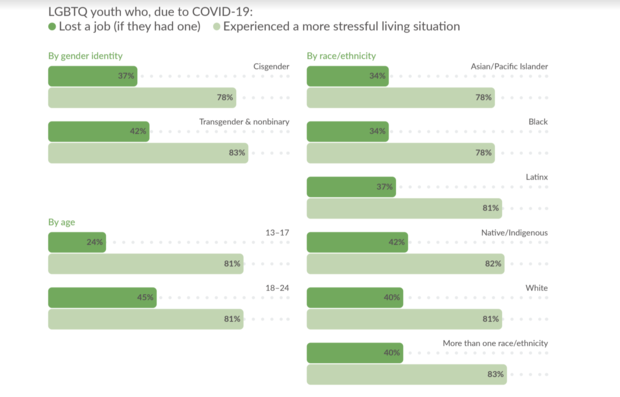 While Grace told CBS News she appreciates being able to stay with their parents, it is still a tough situation. They won’t acknowledge Grace is a woman, she said, and will only use their deadname, the name she was assigned at birth.

“It’s weird because I am safe here. Like nothing bad’s going to happen to me here. The worst of it is not being able to acknowledge that I’m trans, or almost feel as though I’m hiding it,” Grace added. “It’s so weird, especially after all of the challenges of coming out the first time around to sort of put one foot back in the closet.”

While Grace said she isn’t in immediate physical danger, she said the experience has negatively impacted their mental and emotional well-being.

“I definitely do feel less confident these days asking for what I need. Like my first job back into the workforce I was so reluctant about coming out at work because I didn’t really know how to navigate it without being really accepted at home,” she said. “…It’s awkward because they still see me as their son and they love their son and they would do just about anything for him. So I’ve got all my needs met, all the basic ones…and then as you get to the more sophisticated stuff, it’s really drawing a total blank there.” 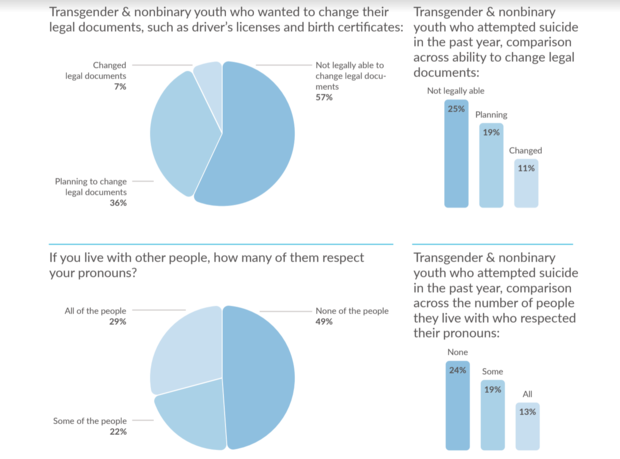 Not all LGBTQ youth who spent the past year at home dealt with families who did not accept their gender or sexual identity. But Paley said Grace’s experience of being in an unsupportive household is not uncommon.

Paley said that for many LGBTQ children and teens in K-12, school was a major source of support. And when the pandemic hit, many had to suddenly learn to live without it.

“For a lot of them who might not have supportive families, their source of support was perhaps that one guidance counselor who understood them, or that one teacher who put a rainbow flag or a trans flag in their classroom. Or maybe it was their best friend who knew the truth about them and could support them for who they are,” Paley said.

Q Chat Space, a national online chat support group for LGBTQ youth between the ages of 13 and 19, is one such place teens have turned to over the past year. The chats, moderated by facilitators, provide 90-minute discussion groups for LGBTQ teens to chat anonymously on various topics, some of which include coming out, mental health, self-care and LGBTQ representation in media.

Deborah Levine, founder of Q Chat Space, told CBS News that the average number of youth joining each chat has tripled throughout the pandemic. Teens are also attending chats more often than they were prior to COVID-19 hitting the U.S.

One study, conducted in the spring of 2020 by people who work with Q Chat Space, looked at messages sent by youth through Q Chat Space and found that many teenagers said they were negatively impacted by living in unsupportive environments.

“No one outside of this chat uses my name or pronouns, im not aloud to dress femininely at all, i haven’t slept in a whole day, I once again didn’t eat anything today, and im slowly losing my mind,” one teen wrote.

Another said “dealing with super religious and homophobic parents and siblings has been a not-so-Great experience. But I really know it’s best to stay in so…”

Levine said that the overall tone in many of the chats has become “goofier” as teens turn to the space as “an escape” from the stressors of the past year. But she said many of the statements made at the beginning of the pandemic remain true.

“It’s been a big shift for everyone,” Levine said. “This has changed the arc of people’s coming out stories, coming out times. …The development of who they were, as an LGBTQ person, is different than it would have been without the pandemic, for sure.”

Q Chat Space is managed by CenterLink, a network of over 270 LGBTQ+ centers. Many of those centers, Levine said, reported that requests for therapy, medication and medication management for mental health issues “have really skyrocketed.” The Trevor Project’s recent survey found that 48% of LGBTQ youth reported they wanted counseling from a mental health professional in the past year, but were unable to receive it.

While telehealth has become a go-to model for mental health care, Levine explained that it is not a viable option for all youth. Children, teens and young adults depend on their parents and guardians for basic needs, so they cannot pay for these services themselves, and if they are in an uncomfortable, unsupportive or abusive environment, having to speak out loud to a therapist at home isn’t always the safest option, Levine said.

“There’s a lot of catch-22s,” she said. “It’s like, oh great, more access through telehealth, but it’s less private.”

With 45% being youth of color and 38% transgender or nonbinary, this is our most diverse sample yet 👇🏾 👇🏿👇🏽https://t.co/ZgwdvV8aOa

And not every LGBTQ youth was able, or allowed, to stay at home during the pandemic.

Euan Hwang, who  manages the day-to-day at Q Chat Space and previously served as a chat facilitator, told CBS News that the service has encountered “several youth” over the past year who were at risk of being kicked out of their homes or who were already experiencing homelessness.

While the survey paints a “troubling” picture in some areas, Paley said it reinforces the need to support LGBTQ youth, especially youth of color, and provide them with gender-affirming spaces.

“The mental health consequences of this pandemic on LGBTQ young people created risks and dangers in addition to the physical risks and dangers of the pandemic,” Paley said. “The place for optimism and hope is that as more people become aware of the lived experiences of LGBTQ youth and can provide support and affirmation to them, that will help to create a better life for LGBTQ young people and will actually help to save lives.”

“The power of being supportive and letting someone know that they are deserving of love and respect has an enormous impact on the mental health of LGBTQ youth,” Paley added.