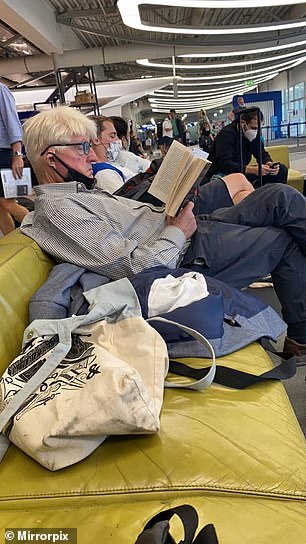 Twice in the past week, Stanley Johnson, father of the Prime Minister, has been photographed not wearing a mask in places where the law says we are supposed to. He is seen reading a book in an airport with his mask pulled down

Twice in the past week, Stanley Johnson, father of the Prime Minister, has been photographed not wearing a mask in places where the law says we are supposed to.

Although 80, he is certainly not senile. Like many other people, he may not like wearing masks, but he must be aware of the law enacted by his son’s administration.

So why doesn’t he obey it? For the same reason that, at the beginning of July, he ignored government advice that only ‘essential’ travel should be undertaken, and flew to his villa in Greece. He went via Bulgaria because there were no direct flights.

Stanley Johnson, whom I know slightly, is a charming and clever man. And also sometimes a careless and selfish one. He can’t be bothered to moderate or change his behaviour in order to avoid embarrassing his son, who is trying to run the country in difficult circumstances.

It was ever thus. In a new biography of Boris Johnson by Tom Bower, serialised in yesterday’s Mail on Sunday, there is a disquieting portrait of Stanley as an often absent, occasionally ill-tempered father who, according to his ex-wife (and Boris’s mother) Charlotte, conducted successive affairs before their divorce.

Remind you of anyone? Stanley was dashing, talented, and intermittently strapped for money. He was (and is) a life force. Bower paints a picture of a chaotic Johnson household in which rubbish was strewn over the floor, and children largely expected to fend for themselves.

I don’t say Boris imitated his father in every respect. According to Bower, drawing on damaging testimony from Charlotte, Stanley once hit her and broke her nose during a marital fracas. She was hospitalised. Friends say there was no violence on any other occasion.

There’s no evidence that Boris has a violent streak. But father and son resemble each other more obviously than is usually the case – not only in their jovial manner and appearance, but also in their cavalier attitude towards marital fidelity, and a sense of not being too bothered with boring detail. 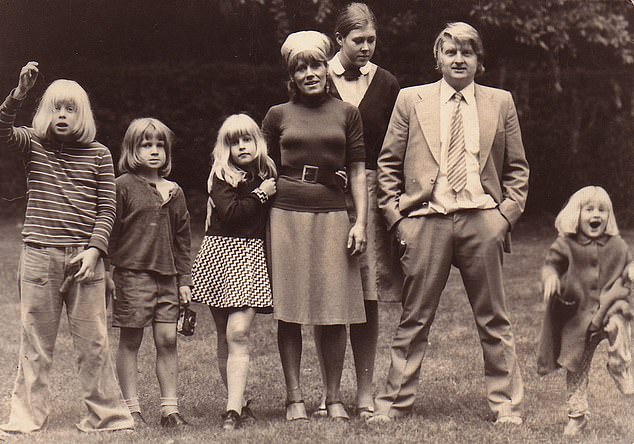 Unhappy families: Boris is on the far left, his parents on the right

And yet there are qualities of kindness and sensitivity in Boris (whom I know better than Stanley) which I suspect may come from his mother, an accomplished painter who, sadly, has suffered from Parkinson’s disease for many years.

In the end, though, Boris has followed his father’s dangerous example of living life at full pelt as a Lord of Misrule. He has done as he pleases, quickly divorcing his first wife, acquiring another who bore him four children, and recently divorcing her. Now he has Carrie Symonds, and a young son.

And throughout it all, like his father, he has conducted numerous affairs, and lived life at a frantic pace. Bower suggests that the inner Boris is a lonely man, traumatised by his parents’ tumultuous relationship and their divorce, as well as by his mother’s eight-month incarceration in a mental hospital.

Yet that childhood sadness has not prevented him from letting history repeat itself. Another bereft wife, another set of four children deeply hurt by a father who turned his back on them.

Bower says Boris gets on better with women than men. His father is the great exception – perhaps the only man to whom he has ever been very close, and then by aping him rather than by being cared for by him. He is always searching for new women to love him.

Successful politicians often have problematic childhoods. Sometimes, like any unhappy children, they react against their parents. Boris’s brother Jo – whom he recently presumptuously ennobled – is buttoned up, reserved and methodical. The very opposite of Stanley – and of Boris.

Boris’s lodestar has been Stanley. His optimism, as well as his infectious charm and high intelligence, have propelled him to the highest office, so that he has surpassed the man whom he emulated.

But gifted though Boris is, and attractive to many ex-Labour voters who habitually dislike the Tories, like his father he lacks those qualities of diligence and application which the crisis of Covid-19 has demanded of him.

He was almost the last man in the world for this unprecedented challenge. Unsurprisingly, it took him weeks to wake up to the seriousness of the pandemic. He missed five important Cobra meetings when preparations were being discussed.

There are echoes here of Stanley’s carelessness over masks and his fierce determination to pursue his own interests.

In February, Boris disappeared mysteriously for ten days to the official residence of Chevening, I am told partly because his publishers are growing restive over their handsome advance for his book on Shakespeare, which he had to get on with.

As late as March 7, when the virus was rampant, he recklessly attended an international rugby match.

Around that time he was thoughtlessly shaking people’s hands despite contrary official advice. His naturally anarchic spirit, inherited from Stanley, did not equip him well for this disaster. 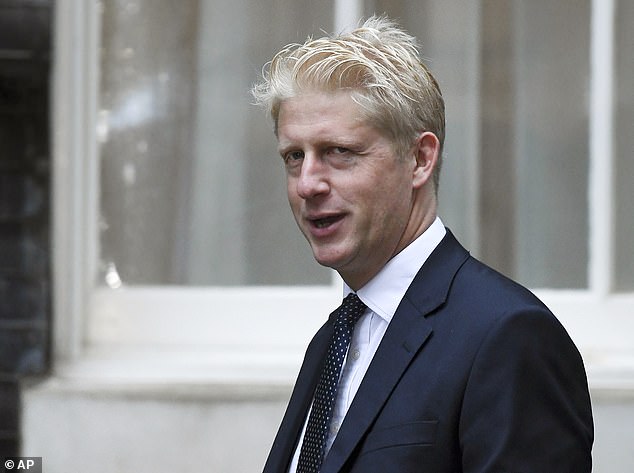 Boris’s brother Jo (pictured)– whom he recently presumptuously ennobled – is buttoned up, reserved and methodical. The very opposite of Stanley – and of Boris

Now he has veered from one extreme to the other, like a carefree poacher transformed into an officious gamekeeper.

By nature inimical to rules, and bored by detail, he finds himself promulgating increasingly draconian regulations. Yesterday he informed us that his tough (if sometimes confusing) approach was ‘the only way to do it’.

You can’t easily change your character over the age of 50. Deep down Boris Johnson is doubtless the same easygoing heir of Stanley.

For the moment, though, a Lord of Misrule has been cast in the unlikely role of the nation’s enforcer, struggling unconvincingly to be a person he isn’t.

By Arthur Martin for the Daily Mail

Boris Johnson last night refused to comment on the explosive allegation that his father struck his mother and broke her nose.

Charlotte Johnson needed hospital treatment after she was hit by her husband when the Prime Minister was ten, according to a new biography.

Mr Johnson’s spokesman refused to comment on the incendiary claim. 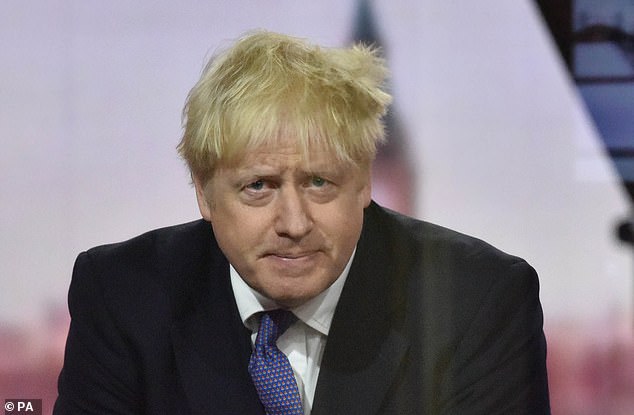 Boris Johnson last night refused to comment on the explosive allegation that his father struck his mother and broke her nose. He is pictured above yesterday on The Andrew Marr Show

Author Tom Bower claims the astonishing secret, combined with the troubled relationship of Boris’s parents, defined him as a man.

‘Boris agonised over his mother’s fate,’ he writes in The Gambler.

‘Not only had he watched her suffer, but also saw his father blatantly deny the truth. Unwilling to confide in others about his father’s violence, he became a loner.

‘In his solitariness, his competitiveness was offset by self-doubt. To mask the misery and hurt, he demanded attention.

‘I need you’: PM’s last text to Arcuri

The Prime Minister sent an alleged mistress a text message saying ‘I miss you and I need you’ while courting current fiancee Carrie Symonds, it is claimed.

When he was Mayor of London, Boris Johnson is said to have had a four-year affair with Jennifer Arcuri – a pole-dancing American businesswoman.

In a new biography about the Prime Minister called The Gambler, by Tom Bower, it is suggested Miss Arcuri ended their relationship as his second term as mayor came to an end in May 2016.

The biography claims his last text message to her was sent on December 29, 2018. He allegedly wrote: ‘I miss you and I need you.’ She deleted the text.

By then, Mr Johnson was divorcing his wife Marina Wheeler and had already been courting Miss Symonds since February of that year.

Doctors spoke to Stanley Johnson ‘about his abuse’ of his then wife, while the couple’s four children were told a car door had hit their mother’s face, it is claimed.

Friends said the incident took place in the 1970s when Mrs Johnson was suffering from obsessive compulsive disorder and had ‘flailed’ at Stanley, who broke her nose when ‘flailing back’.

They added that Stanley, now 80, deeply regretted the incident and denied that he had been violent on any other occasion. He did not respond to requests for a comment yesterday.

Mr Bower describes Stanley’s marriage to Charlotte as violent and unhappy. In the book, she is quoted as saying: ‘He broke my nose. He made me feel like I deserved it.’

Mrs Johnson’s parents visited their daughter in hospital and confronted Stanley who denied any involvement, the book claims.

The author says Mrs Johnson ‘confronted Stanley about the affairs she suspected him of having’, which he denied. In the book, which is being serialised in The Mail on Sunday, Mrs Johnson, now 78, says: ‘Stanley wanted to be loved and wanted sex and he wanted power. And when I contradicted him, it threatened his power.’

Based on interviews with hundreds of colleagues and family members, the book portrays Boris as a loner who struggled to cope with his parents’ divorce in 1978. The strange revelation George and Amal Clooney revealed about Meghan and Harry
We and our partners use cookies on this site to improve our service, perform analytics, personalize advertising, measure advertising performance, and remember website preferences.Ok