STEPHEN GLOVER: Why I fear we are slipping into a police state

STEPHEN GLOVER: Over-zealous boys in blue – and why I fear we are slipping into a police state

We British like to think of ourselves as a moderate people, and most of us believe that our police are equally measured and sensible.

Thank God, we say, that we don’t suffer the heavy-handed policing which is the bane of European countries. Not for us armed coppers who are wont to bash you over the head before asking any questions.

But are we changing? Is the pandemic bringing out a latent authoritarianism among those responsible for enforcing the law? Are we even witnessing disquieting signs of a prototype police state?

West Midlands Police and Crime Commissioner David Jamieson yesterday urged the Government to give officers power of entry to homes, to help ‘enforce the new regulations more easily’ if they suspect an illegal party is taking place. 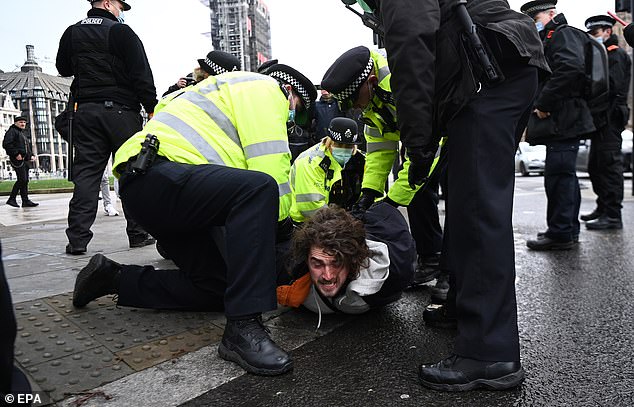 A man is arrested by police during an anti-lockdown protest at Parliament Square in London. Police made a number of arrests during the protests on Wednesday 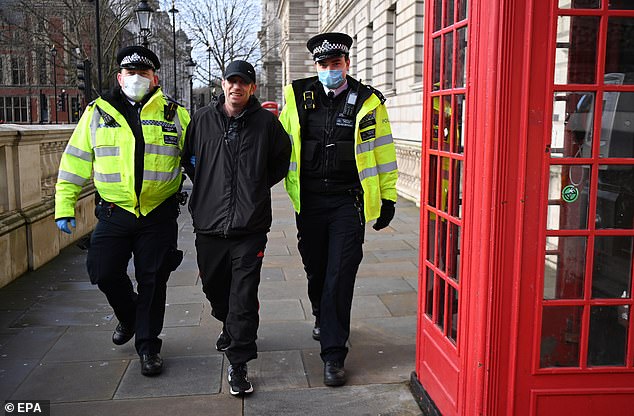 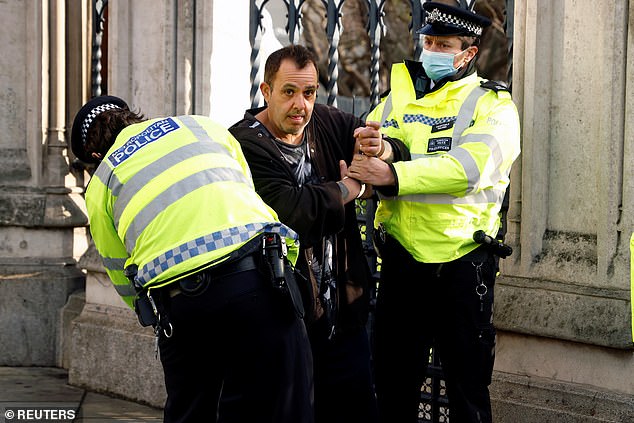 Police officers detain a demonstrator at Parliament Square in London during an anti-lockdown protest, amid the rising number of coronavirus cases in the capital city

Mr Jamieson, a former Labour MP, is one police commissioner among many. I trust his draconian request won’t be granted. But it seems extraordinary that someone in his position could imagine the possibility of officers forcing their way into someone’s home for reasons to do with Covid.

A knock on the door at six o’clock in the morning, and before you know what is happening, burly policemen are searching your house, wondering who is responsible for the empty wine or beer bottles, and checking who has the right to be in a particular bed.

Utterly fanciful? I fear not. Almost from the moment the new lockdown became law yesterday morning, the boys in blue were throwing their weight around, zealously applying new restrictions.

Council Covid wardens were reportedly out in force across the country, as the authorities vowed to fine mask-flouters or anyone stepping out of the house without ‘good reason’ at least £200 on the spot.

The Metropolitan Police in London issued a warning that anyone who breaches lockdown rules is more likely to face fines — including for not wearing a mask when it is obligatory to do so.

Whereas officers might previously have had a quiet word with a miscreant, they are now likely to slap on a penalty charge. People not ‘wearing masks where they should be and without good reason can expect to be fined — not reasoned with’.

The capital’s constabulary hasn’t been slow to demonstrate its aggressive new approach. Officers chased protesters through Parliament Square yesterday before putting them in handcuffs. They arrested supporters of Julian Assange in the street after he had been denied bail, including 92-year-old Eric Levy and several other pensioners.

In Maidenhead, uniformed police distributed leaflets to residents out and about which read: ‘You should exercise no more than once daily. This should be by walking, running or cycling etc from your home address. You should not be driving to a location away from your home to carry this out.’ 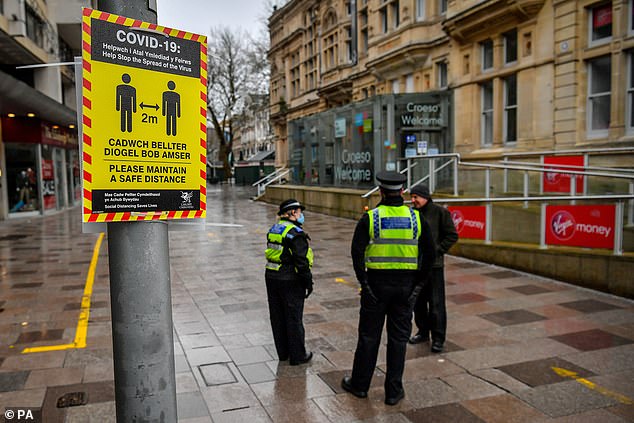 Police chat with members of the public as they patrol the central shopping areas of Cardiff, Wales, on the first weekend of January sales, with many shops not open to browse 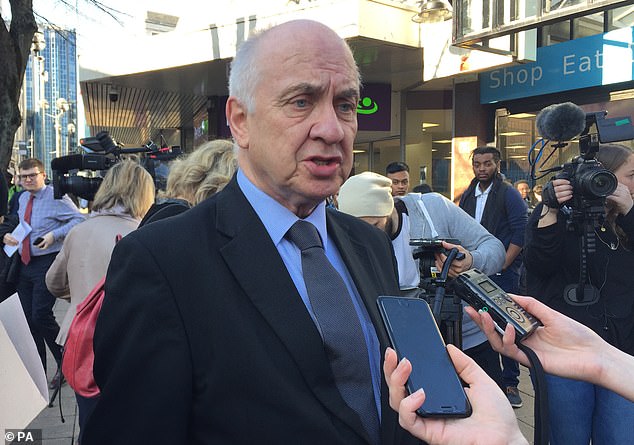 It’s true that bosses at Thames Valley Police later said the leaflets should not have been handed out. But someone had gone to the trouble of printing them with the apparent intention of putting the heat on law-abiding citizens.

And so it goes on. All this is reminiscent of Derbyshire Police using drones to film people in pairs rambling in the middle of nowhere at the beginning of the March lockdown. The reasoning — surely entirely subjective — was that travel to a beauty spot was not ‘essential’.

But this time, at the start of the third lockdown, the police appear to be acting in an even more officious way, and to be doing so on a larger scale than nearly nine months ago.

Yesterday, the chair of the National Police Chiefs’ Council, Martin Hewitt, issued a statement which effectively gives the police a licence to interrogate anyone who leaves home: ‘It is right for officers to be inquisitive about why individuals may be away from home.’ Shades of a police state?

Please don’t misunderstand me. We should obey laws, even if we disapprove of them. Someone holding an illegal rave for dozens of people, some of whom are almost bound to be infectious, should be fined. 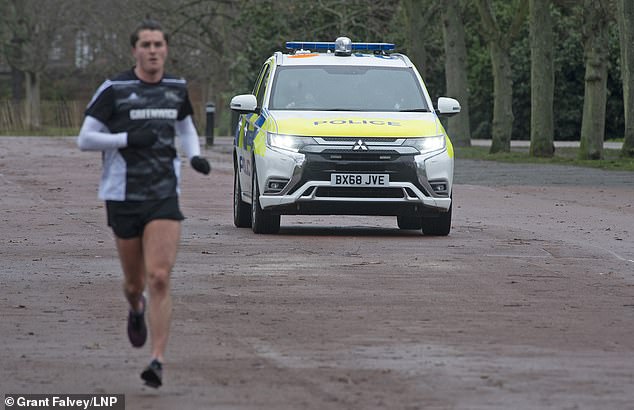 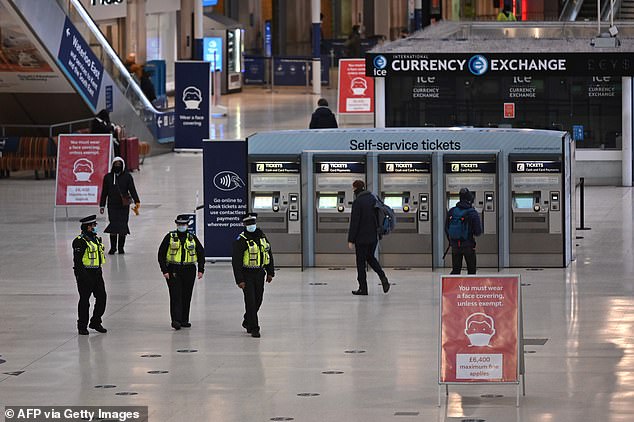 What is undesirable is targeting essentially honest people whose natural inclination is to behave lawfully. I may deprecate Julian Assange, but I don’t like to see his elderly supporters being carted off by overbearing police officers for demonstrating in the street.

But they are easy pickings and can’t fight back. We are most of us easy pickings for the police — far more so than the burglars and other criminals whose offences are routinely ignored by the authorities.

How telling that the West Midlands — whose Police Commissioner thinks officers should have the right to enter your house under Covid regulations — should have one of the worst rates in the country for solving burglaries. Nearly nine cases out of ten are closed without a suspect being identified.

Why doesn’t Mr Jamieson don sackcloth and ashes over the lamentable performance of the West Midlands Police, instead of making the illiberal suggestion that officers should be able to invade your home?

In the end, the Government is more to blame than the police, because it has promulgated these swingeing laws, and given the constabulary the impression it expects them to be rigorously enforced.

Speaking for myself, I might worry less about our liberties being eroded — so long as one could be sure the process was temporary — if there were evidence that these extreme measures had been successful in stymying the virus.

At least the Chinese, whose liberties were more drastically curtailed than our own, have the reward of an infinitesimally low infection rate. Britain’s death toll in the first wave was Europe’s highest, and it seems likely to be the highest in the second wave.

In other words, although the restrictions we have endured have prevented even greater fatalities, they have demonstrably not succeeded in suppressing the virus, or even containing it. We have the worst of both worlds — astronomical death rates and ever greater incursions into our freedoms. 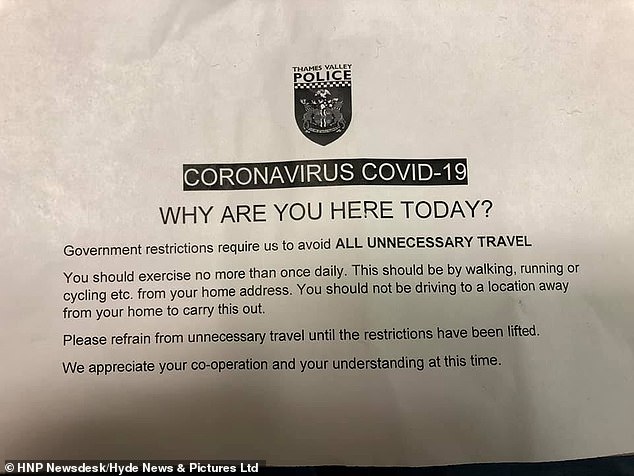 In Maidenhead, uniformed police distributed leaflets (pictured) to residents out and about which read: ‘You should exercise no more than once daily’

Nor can I forget that the same Government, which encourages the police to be punitive, has included several individuals whose behaviour ought to have interested officers — if there were any semblance of even-handedness.

Most famously, of course, the now superannuated Dominic Cummings undertook a round trip of some 60 miles to Barnard Castle in April in contravention of the lockdown.

We shouldn’t forget reports of Health Secretary Matt Hancock breaching the Government’s 10pm drinking curfew in the Commons bar in October, or Communities Secretary Robert Jenrick’s foray during lockdown last March to his country house, seemingly not his main residence.

The egregious Cummings aside, neither minister committed a serious misdemeanour and both denied breaking the rules. All the same, under the new dispensations people are being fined for apparently slighter infractions.

Yesterday at 5am, four people, from different households, in a car were pulled over by Northamptonshire police. Their claim they were on their way to get a McDonald’s breakfast was disbelieved, as the fast food restaurant didn’t open for another two hours. Each was fined £200.

One law for our rulers, another for the ruled? That is another indication of a police state. Bit by bit, this is the direction in which an overzealous police force, guided by our unwise Government, is inexorably taking us.