Pregnant mother of Britain’s biggest family Sue Radford reveals her daughter, 18, is also expecting – making her a grandmother for the FOURTH time

Sue Radford, who is expecting her 22nd baby in Spring, has revealed her eighteen-year-old daughter is also pregnant.

Sue, 44, and husband Noel, 48, from Lancashire, who welcomed their first of 21 children thirty years ago and are preparing for the imminent arrival of their little girl, took to Instagram to announce it was an ‘exciting year’ – before revealing she’s set to become a grandma for a fourth time.

The supermum shared a snap of an adorable onesie, booties and ultrasound scans surrounded by scattered heart-shaped petals with her 215, 000 followers.

She captioned the post: ‘What an exciting year it’s going to be with our baby due in 6 weeks and now a new grand baby due in September! Congratulations @millieeradfordd you’re going to be an amazing mummy #newbaby #grandbaby #soprecious #love #blessed.’ 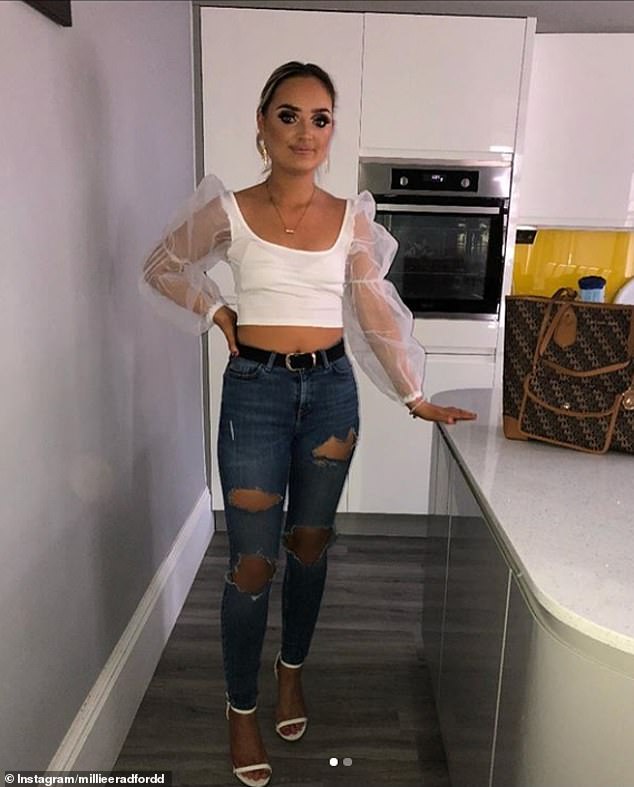 Sue Radford, 44, from, Lancashire, who is expecting her 22nd baby in Spring, took to Instagram to announce her daughter Millie (pictured), 18, is also pregnant 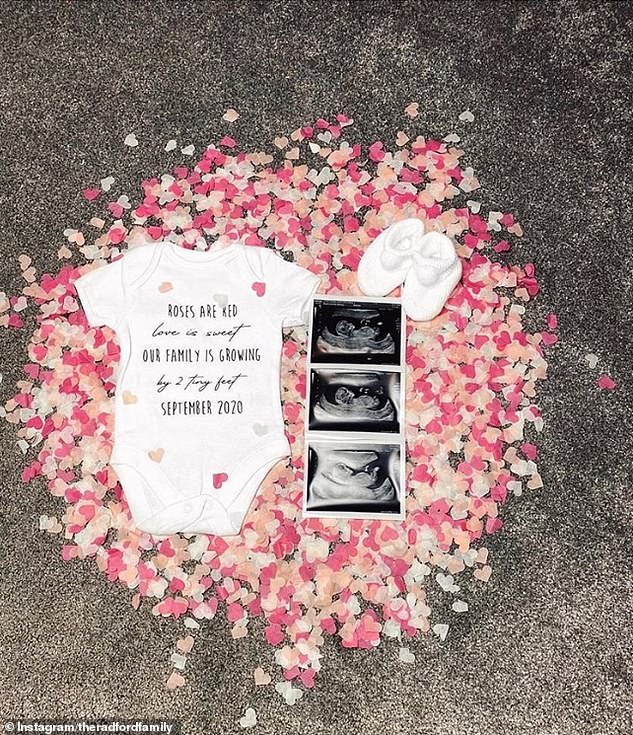 The supermum shared this adorable snap to her social media page, which included a onesie, booties and ultrasound photos 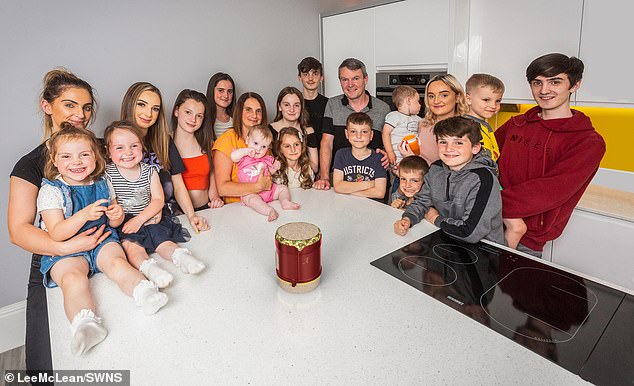 The writing on the onesie also revealed Millie’s due date, reading: ‘Roses are red, love is sweet, our family is growing by two tiny feet. September 2020.’

Taking to her own social media page, Millie shared the same photo and penned: ‘Excited for this new chapter.’ 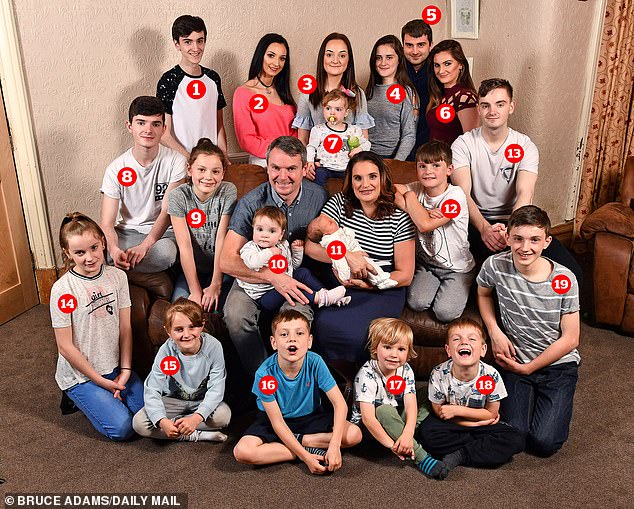 And members of Britain’s largest family were quick to take to the comments section to share their joy at their ever-expanding brood.

‘1 new sibling and a new niece or nephew. 2020 is definitely a brighter year for us all,’ enthused Sophie, while another of Millie’s sister’s Chloe added:

‘Can’t believe my little sister is having a baby of her own… I am EMOTIONAL. You’ll be an amazing mummy @milleeradfordd what a lucky little one.’

A HISTORY OF THE RADFORD FAMILY

1982: The couple met for the first time when Sue was seven

1989: They welcomed their first child Chris

1993 The couple got married, and their second child Sophie was born. Children followed in quick succession ever since.

August 2012: Their first grandchild was born after Sophie gave birth to Daisy

October 2019: Sue reveals she is pregnant with her 22nd baby

Meanwhile, members of the public were also eager to share their well-wishes.

‘Oh my goodness!!!! We have 11 (all 12 and under though) and my husband and I always tend to joke that “the best part of having children is the GRANDCHILDREN!!! This is SO exciting!’ wrote one, while a second penned: ‘Aww congratulations to all.’

A third added: ‘Congratulations Millie. Wishing you all the best with your pregnancy, I know you’ll be a great mummy with everything your parents have taught you,’ while a further penned: ‘Aww so precious. Congratulations to you all on an exciting year.’ 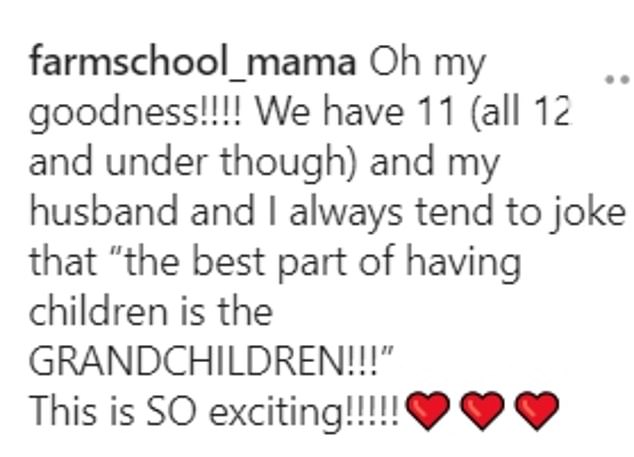 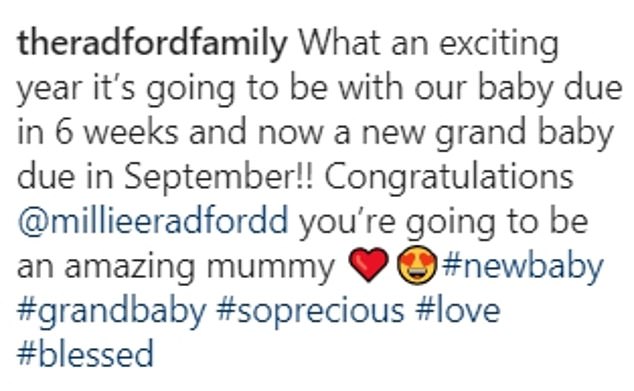 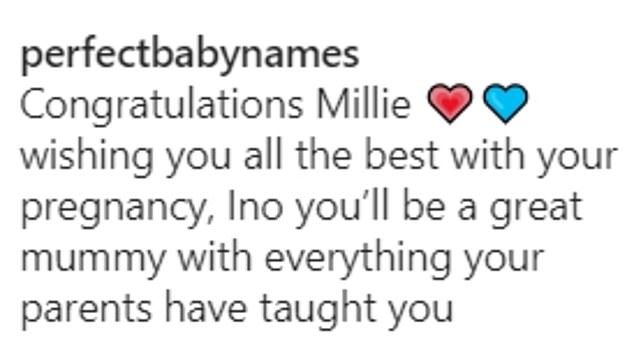