Swimmer says his toes are curled up like 'alligator feet'

Swimmer who walks on his TOENAILS because his toes are ‘curled up like an alligator’s’ has them straightened in My Feet Are Killing Me!

A swimmer whose toes have curled up like ‘alligator feet’ has life-changing surgery in My Feet Are Killing Me!

In tonight’s episode of the Quest Red show, Jefferson, from Atlanta, who is an enthusiastic swimmer, reveals he has to wear socks while he’s in the pool to hide his feet, which, as he admits, have caused him pain and embarrassment ever since he was child.

‘My feet are a mess,’ he explains. ‘They’re ugly, they’re dry, they’re all over just bad. Every time I go swimming at a swimming pool, I always put socks on. I’ve been doing it since I was a little kid.’

Even Jefferson’s loving girlfriend LaShai reveals that he reluctant to show her his feet at first. 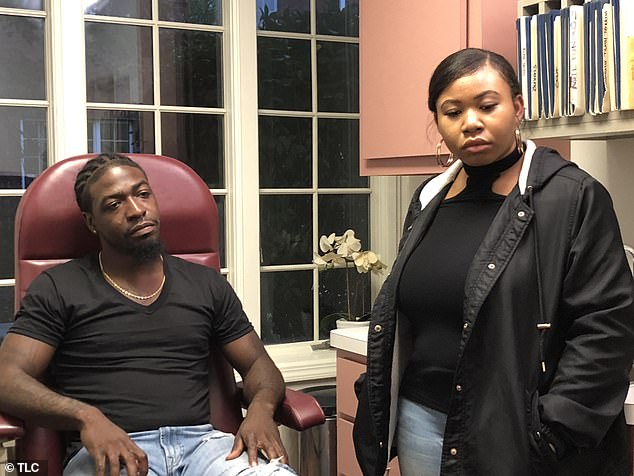 Jefferson, from Atlanta, whose toes have curled up like ‘alligator feet’ has life-changing surgery in tonight’s episode of My Feet Are Killing Me! Pictured, with his girlfriend LaShai 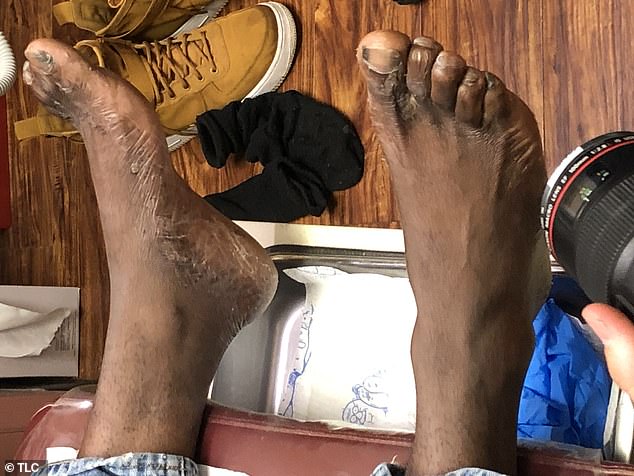 ‘He told me that I had to fall in love with him first in order to see his feet,’ she says. ‘But now I completely understand why. Jefferson’s feet look kind of like alligator feet!’

While a great source of embarrassment for Jefferson, his hammertoes are also incredibly painful to stand on and make walking difficult.

‘I’m walking on my toe nails because my middle toes all curl over, so the nail curls over with them,’ he says. ‘If you try to pull it up and cut it then it bleeds sometimes. It’s so painful that I just leave them.’

Finally looking to do something about his feet, Jefferson flies with LaShai from his hometown of Atlanta to New Jersey see foot surgeon Dr Brad Shaeffer at his clinic. 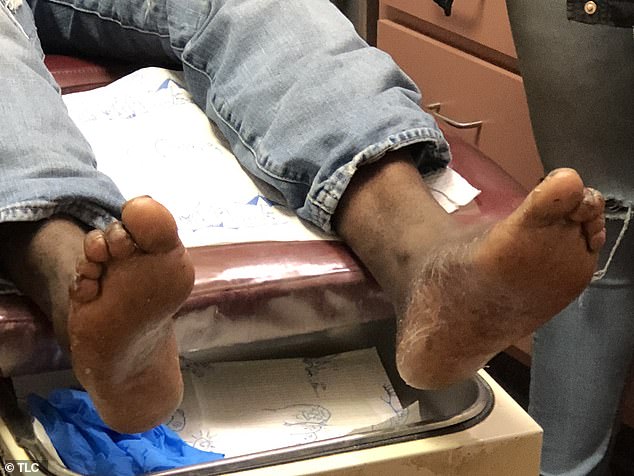 Speaking of his feet (pictured), Jefferson says: ‘My feet are a mess. They’re ugly, they’re dry, they’re all over just bad’

As he slips off Jefferson’s socks, the expert unveils the swimmer’s dry, curled up toes in one of the worst cases of ‘Mallet toe’ he’s ever seen.

WHAT IS HAMMER TOE?

Toes become deformed when the pressure on the toe is stronger than their joints can resist.

Hammer toe occurs when one or both joints of the lesser toes bend abnormally, pointing upwards.

This bending puts pressure on the toes when wearing shoes, causing problems to develop.

In the early stages the affected toe will still be flexible, and can be straightened when pressure is applied to the “bend”.

As time passes the toe can become permanently bent and rigid. Corns and calluses form and these can become very painful.

People can be born with this condition, but it is usually caused by a muscle and/or tendon imbalance, which leads to a bending of the toe as a result of structural changes that occur in the foot.

It can also be or brought about by pressure from adjoining toes caused by arthritis, bunions etc.

‘From this angle I can’t even see the front of your toes,’ he says. ‘His toes basically look like he was walking on amputations, I mean that’s how curled up they were. It’s pretty shocking.’

But Jefferson’s toes aren’t the only problem, as Dr Shaeffer notes that the overall condition of Jefferson’s feet is appalling.

‘He had athletes foot all over his feet, he had maceration in-between each toe, basically like if you go into a pool for too long. He had that times 10!’ he said.

For Dr Schaeffer, while many of the issues can be solved with creams ointments, the only hope of correcting Jefferson’s misshapen toes is through surgery.

Using a diagram, he calmly talks Jefferson through what he proposes to do in surgery, essentially snipping and releasing the tendon in his foot like a spring, placing in pins, and straightening out his toes.

But it’ll be a long road to recovery, and Dr Shaeffer won’t be able to correct both feet in one operation.

On the day of surgery, Dr Shaeffer pops in to see his patient before the operation.

Understandably, Jefferson is nervous but eager to get the surgery done.

‘We’re going to get him fixed up, but it’s going to take some work,’ Dr Shaeffer says confidently.

Soon, the foot surgeon gets to work, slicing into the curl of Jefferson’s toes, and slowly resetting them. 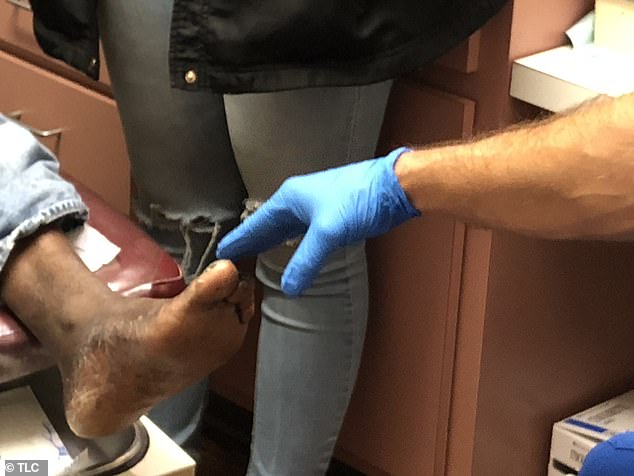 Before surgery, the foot surgeon explains to Jefferson he plans on essentially snipping and releasing the tendon in his foot like a spring, placing in pins, and straightening out his toes. Pictured, Jefferson’s feet 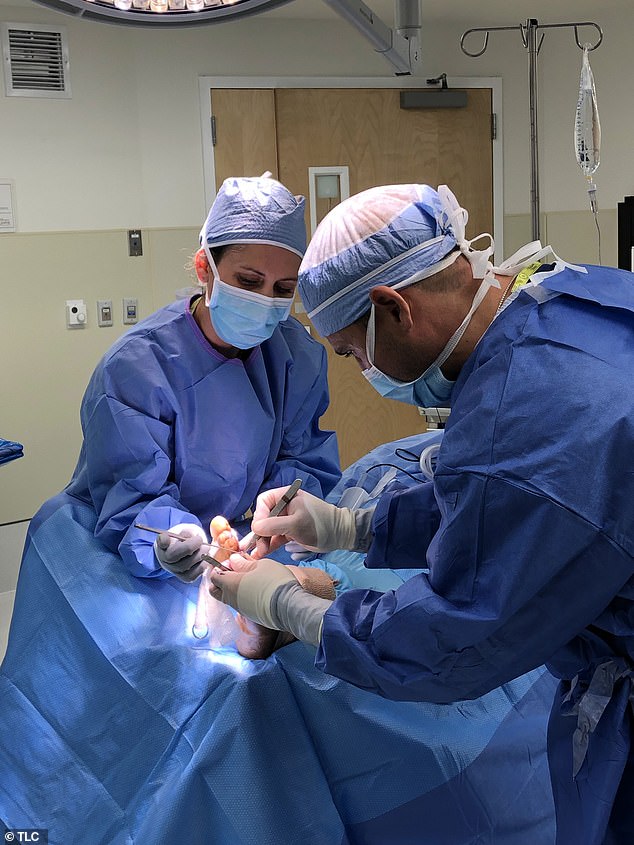 During the operation, Dr Shaeffer makes an incision in the flexor tendon before placing metal pins in Jefferson’s toes, allowing them to straighten out. Pictured, during surgery

Dissecting down to the bone, he then removes the head of the bones in each of Jefferson’s toes, sawing away at them expertly.

Afterwards, Dr Shaeffer makes an incision in the flexor tendon before placing metal pins in his toes, allowing them to straighten out.

Fast forward six weeks after Jefferson’s surgery, and he’s back for his follow up appointment.

Whipping off Jefferson’s shoes and socks, Dr Shaeffer can see an immense difference – his toe are straight.

‘I was just super happy about the result,’ the expert explains. ‘Going from a hammertoe to as straight as they are!’

Jefferson himself is delighted, and is ready to get back in the pool…without wearing any socks! 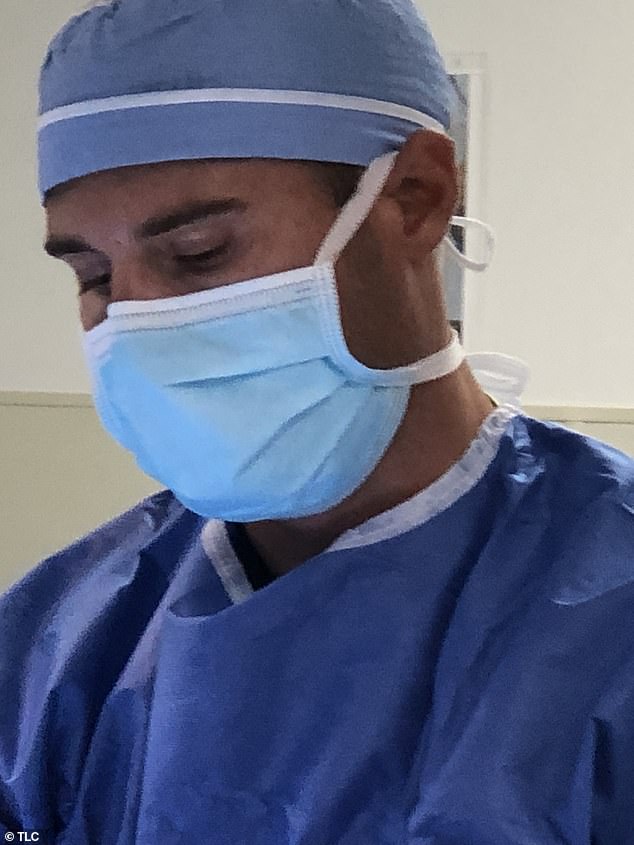