Tax cuts more about popularity than digging economy out of recession

This is the hanged-for-a-sheep-rather-than-a-lamb budget. Realising the coronacession means it will be ages before he can deliver on his premature claim to have the budget Back in Black, Scott Morrison has decided to go for broke (if you’ll excuse the expression).

Many people have been anxious to see just how big Josh Frydenberg’s expected budget deficit will be (a record $213 billion, dwarfing anything produced by the free-spending Kevin Rudd) and how much public debt it will leave us with (almost a net $1 trillion by June 2024, and continuing to grow every year until at least June 2031). 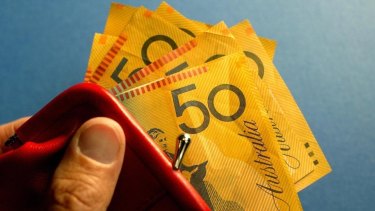 Tax cuts will be welcomed by most but ultimately will do little to boos the economy.Credit:Gabriele Charotte

Mr Frydenberg is right to say that, if we want get the economy moving and unemployment falling, he has no choice but to spend in giant licks. More concerning is whether all the money added to the debt has been chosen to deliver the greatest possible gain in jobs.

That’s the problem. It hasn’t. Although the plan to subsidise the wages of newly employed young people in their first year gets a big tick, the brought-forward and back-dated tax cut that is the centrepiece of this budget is among the least effective ways to create jobs.

That’s because much evidence shows that a high proportion of tax cuts is saved rather than spent. This is particularly likely at present, when so many people fear they may be next to lose their job.

To be fair, Mr Frydenberg has not brought forward the third stage of the tax plan – still scheduled for July 2024 – which is slanted heavily in favour high earners. It’s well established that high income-earners save a higher proportion of tax cuts than lower income-earners.

If you remember, when stage one of these tax cuts allowed people getting the new “low and middle income tax offset” to receive a flat $1080 refund in July and August last year, Mr Frydenberg confidently predicted it would give a fillip to retail sales. Didn’t happen.

Mr Frydenberg justifies the tax cut by saying “we believe people should keep more of what they earn”. Fine. But such a belief has little to do with this budget’s stated goal, nor the justification for adding to the deficit: it’s “all about jobs”.

This tax cut is much more about political popularity than getting the economy out of recession.

The government has made much of its efforts to limit the rise in deficits and debt by keeping new spending measures temporary. But the cost of the changed tax scales will roll on forever.

When the Economic Society of Australia surveyed 49 leading economists recently, asking them to choose the four programs that would be most effective in supporting recovery, only 10 of them nominated bringing forward the legislated tax cuts.

So what measures did they favour? More than half wanted spending on social housing (which creates employment in the housing industry, adds to our stock of homes and helps the disadvantaged).

Half the economists wanted a permanent increase in JobSeeker unemployment benefits (because $40 a day is below the poverty line and any increase is almost certain to be spent).

But those two top preferences have been ignored in this budget.

By contrast, some of the measures that are in the budget didn’t raise much enthusiasm. An expanded investment allowance for business got support from only 29 per cent of the economists – presumably because it wasn’t expected to be very effective. At best, it’s likely to draw forward some of the spending on capital equipment that would have been spent in later years.

And even spending on infrastructure projects was preferred by only 20 of the 49 economists – perhaps because too much of it goes on wasteful projects.

The government’s two main stimulus measures – the JobKeeper wage subsidy and the JobSeeker temporary supplement – have been most successful in breaking the economy’s fall.

But they were cut back from the end of September, and this budget doesn’t change the plan to end them from March and December respectively.

If the measures in the budget prove insufficient to fill the gap their withdrawal leaves, and so keep the recovery progressing, it will be because the government has been too quick to limit its spending and replace it with tax cuts.