Last week a bunch of artists threw hammers at clouds, as they set about vandalising a former indoor playground. Meanwhile, someone was putting an 80s-era VW Golf in the foyer modified to look like it had sprouted like fungus from a rock.

NotFair is not your average art fair. For the tenth time, curators are staging a show that’s deliberately left-field, featuring artists they reckon aren’t getting the attention they deserve: the “why aren’t these people blowing up?” crowd. 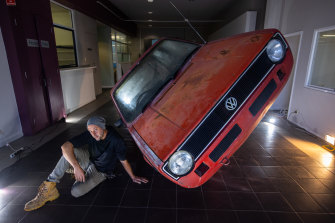 Each year they find a venue that’s in the hands of developers, so they can really go to town on it. Last time in 2019 it was a former margarine factory: a highlight, apart from the smell, was the human-body-sized canvas bag they discovered that mysteriously disappeared overnight.

This year it’s a former community hall in Windsor, a different kind of leap of faith.

As co-founder and co-curator Tony Lloyd puts it, they hunt down art that “appeals to us, surprises us or perhaps even disturbs us… there are definitely some works you look at and think ‘I really don’t like that but I can’t stop looking at it’.” 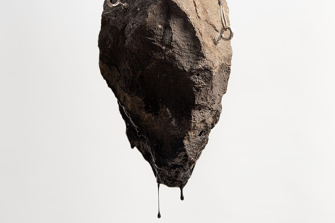 Call it the car-crash test.

Speaking of which, the first work to confront visitors will be Jason Waterhouse’s Automotive Geologies (VW Golf), a big red car on a rock. Lloyd loves it. He says it sets the tone for the show: “it tells people that artists can warp reality”. 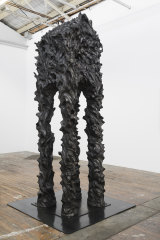 Jeremy Blincoe The Gravity of Things.

“I was interested in how cars are made out of rocks and dinosaur bones,” he says. “In some post- post-world, what would happen if the car literally started trying to become the rock again? So basically it’s the little Golf trying to squeeze itself back into its heritage.”

He’s spent “every spare minute of my life since June last year” creating it, in between business projects and family life.

“It’s been a pretty exhausting, epic journey, but we got here,” Waterhouse says.

He loves being a part of NotFair, which was conceived as a “fringe” event to Melbourne’s Art Fair.

“These incredible curators always find incredible spaces to do incredible s–t that’s f—ing awesome,” he says, before apologising for the newspaper-unfriendly language.

“They take artists who sort of sit on the edge of experimentation and push their stuff as hard and as far as they can… You’re not going to see your run-of-the-mill work.”

Other highlights of the show include delicate abstracts made from iron filings in a magnetic field; an imposing, writhing wooden sculpture made from cypress pine that’s been carved, burned and coated with graphite; and a basalt rock torched at such high temperature that it’s transforming into dripping obsidian.

When the curators arrived at the old hall, they had to rip up the children’s play equipment inside to make room for the show. But there was a problem: high up on the walls, cute blue clouds set an unacceptably jolly tone.

“We tend to be drawn to darker things,” explains Lloyd.

NotFair runs at the former Kardinia Church in Windsor, May 20-30.