The lives of bands should be measured in dog years rather than human years, because it's so wretchedly hard to form one, write material, organise rehearsals, find a gig (let alone a decent one), work with any regularity and somehow record.

To hold a septet such as The Catholics together for 29 years is a tribute to its leader, bassist Lloyd Swanton, and to the potential implicit in the initial concept all those years (and personnel changes) ago. 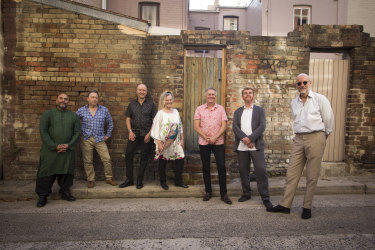 The Catholics have been performing together for 29 years. Credit:Camille Walsh Photography

That concept was to let high-calibre improvisers loose upon material drawing on rhythms from the Caribbean, South America and Africa: a sophisticated party band, if you like.

But as one who treats happiness with something of the suspicion with which xenophobes treat foreigners, I've enjoyed the increasing breadth of moods the band has embraced, with more melancholic melodies and lighter grooves balancing the default exuberance.

Nelson Cavaquinho's bossa nova of Folhas Secas began with the tune barely fluttering from the keys of Gary Daly's accordion, and the groove just the gentlest of breezes. When Sandy Evans' tenor saxophone and James Greening's trombone entered, they were like two human voices singing mellifluous harmonies.

Greening's Mossman opened with fractured cries, whispers and insinuations from the composer's pocket-trumpet over a bass ostinato, and then Evans' soprano took flight before the music unravelled to an enthralling improvisation of such tiny sounds as might be made in a toyshop when no humans are around to hear.

With drummer Hamish Stuart and percussionist Fabian Hevia, this was the A-team version of a band which has become an extended family. Occasionally there was some rust in the spokes, but the wheels still turned: wind-in-the-leaves delicacy and more spirited playing rotating, and The Catholics still sounding like no one else.