Melbourne’s Hanover House has been given a dramatic makeover, draped in vibrant 1970s-style wallpaper and dotted with native flowers that light up at night.

Artist Atong Atem was commissioned to create a piece for the building by property developer Beulah, who provided her with a broad brief based on the idea of an eco-conscious future. “I was thinking about history and the space itself,” Atem says of the project, “so it felt really relevant because they are some of the things I think about when I am making my works anyway.” 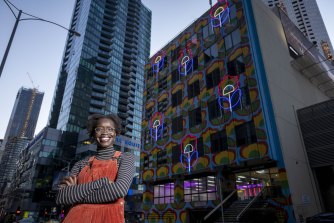 Atong Atem outside Hanover House, which has been transformed by her work ‘Outdoor Living’, 2021. Credit:Wayne Taylor

It’s something of a last hurrah for Hanover House: Beulah recently bought it, and it will be demolished to make way for what will become Australia’s tallest building, the $2 billion-plus project, STH BNK. Construction will begin next year.

Ethiopian-born, South Sudanese artist Atem, who is based in Melbourne, spent much of last year and several months this year in lockdown. That inspired her to create something bold and colourful, not at all subtle.

“Aside from us not having much exposure to art recently, we’ve not had much to look forward to,” Atem says. “Everything felt monotonous and overwhelming in a way, so it kind of felt like – who knows what will happen in the next little while, we might end up back in lockdown, so let me say something really loud right now. It’s a bit of a novelty. I don’t shy away from bright colours, I’m not much of a minimalist.” 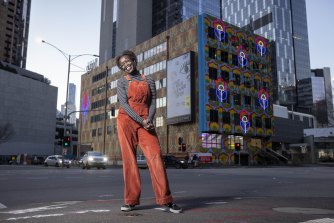 In a nod to Hanover House’s heritage, Atong Atem came up with a vibrant 70s-style aesthetic.Credit:Wayne Taylor

The 30-year-old is interested in Australian flora from a historical and a colonial perspective. “I’m also quite fascinated in how the flora here is similar to the flora in Africa. Banksias and waratahs are of the same family as proteas, which are native to Southern Africa,” she says. “In terms of thinking about movement and migration, and my own migration, it seems like flowers are a really beautiful metaphor for that: seeds flown in the wind getting planted elsewhere.”

The motifs used in the work – which is titled Outdoor Living, 2021 – are evident in Atem’s earlier pieces, including her photographic Studio Series and her first film, Banksia, which was made for the RISING Festival. The short film, which also has a 1960s and ’70s aesthetic, is due to screen at Sydney Contemporary in December.

“Immediately what came to mind was ‘70s textiles and that kitsch ’70s Australian home. I liked this idea of bringing this wallpaper that might have sat comfortably in someone’s loungeroom in 1973 to the outside of a city building,” she says. “It’s already a bit surreal having this banksia-covered building in the middle of the city, but then adding another layer and referencing an interior space on an exterior surface.”

When the seven-storey Hanover House was built in 1973 it was the tallest building in Southbank. Now it is one of the oldest buildings in the neighbourhood, surrounded by high-rises made of glass and concrete. Before it is demolished, the building will host a range of arts and food events, lockdowns permitting, with chef Scott Pickett’s event kicking off the lineup in mid-September.

From Friday, Hanover House will light up at 5.30pm every day until midnight, for the next six months. For Atem, the idea was to create a transformative work. “There’s such an association with light in the cityscape, I like the idea of letting the work respond to the sunset. It transforms and evolves into this other thing,” she says. “I like the idea that from a distance in night, you might look down the street and just see these floating flowers and not really have a context for them.”