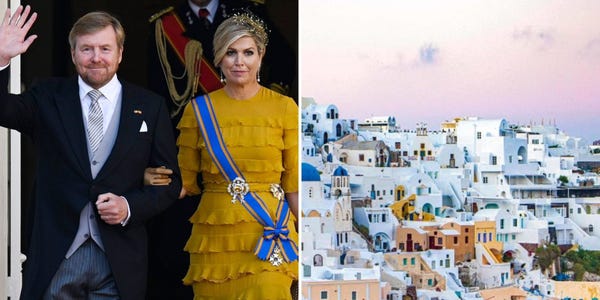 The Dutch king and queen returned home early from a trip after being seemingly travel-shamed for their planned vacation to Greece.

King Willem-Alexander and Queen Maxima returned to the Netherlands on Saturday after spending one day in southern Greece, where the king has a private villa, Reuters reported.

The Dutch royal couple left for their trip amid an uptick of positive COVID-19 cases in the Netherlands, which prompted the government to impose a partial lockdown last week that closed bars and restaurants for at least four weeks, according to the Associated Press.

While traveling to Greece from the Netherlands is permitted, the Dutch government discourages unnecessary travel as part of the new partial lockdown rules, according to the BBC.

Not long into their vacation, the royal couple was apparently made aware of public backlash about their travels that became prevalent in Dutch media, based on a statement they made on Friday.

"We see the reactions by people to reports in the media," the Dutch royal couple said in a statement published Friday by the Royal House of the Netherlands. "We wish to leave no doubt that it's necessary to follow the guidelines in order to get the COVID-19 virus under control. The discussion over our vacation is not contributing to that."

In response to the backlash targeted at the royal couple, Dutch Prime Minister Mark Rutte wrote a letter to the parliament saying that he was aware of the king and queen's plans to travel, but that he "made the wrong assessment" about allowing them to go through with the trip.

Rutte wrote that he "realized too late" that the royal couple's holiday "could no longer be reconciled with the increasing infections and the stricter measures."

"This should have prompted me to reconsider the intended holiday. I bear full ministerial responsibility," Rutte said in a letter obtained by the BBC.

In the Netherlands, the seven-day rolling average of daily new COVID-19 cases has more than doubled over the past two weeks, according to the Associated Press.

On October 6, the country hit a record number of new daily cases, reporting 9,155 positive cases that day, according to data from Johns Hopkins University. Since Saturday, the country has reported 8,149 new cases.

Representatives for the Royal House of the Netherlands did not immediately respond to Insider's request for comment.