If the breakout success of New Zealand writer-director Taika Waititi (Jojo Rabbit) has shown one thing, it’s that Kiwis have a knack for cutting heroes down to size. Whatever grand poses they strike, Waititi’s characters are always a bit ridiculous, from the teenage runaway (Julian Dennison) on the run in Hunt for the Wilderpeople to the blustering God of Thunder (Chris Hemsworth) in Thor: Ragnarok. 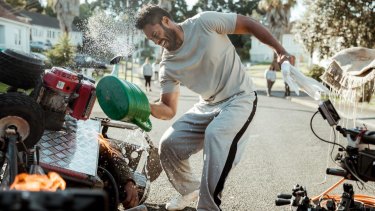 Uli Latukefu stars as Fritz in The Legend Of Baron To’a.

Self-deprecation of this kind is a trademark of New Zealand comedy to the point where it suggests a degree of neurosis about the nation’s place in the world. The positive flip side is an acceptance of the fact New Zealand culture is a patchwork stitched together from diverse sources — and of the incongruities that arise as a result.

This understanding is the basis for The Legend of Baron To’a, a strange but enjoyable hybrid of martial arts movie and folksy comedy from first-time New Zealand director Kiel McNaughton. The plot has the shape of a classic Western: the son of a departed hero returns to the hometown he left long ago, to find that the bad guys are now in charge. To set things right, he must summon his resources and find the courage to take up where his father left off.

So far so solemn. The humour stems from the setting where the showdown is destined to take place: a steep cul-de-sac in suburban Auckland — known to some locals as “The Sac” — where palm trees tower over weatherboard houses, groups of kids tear around on bikes and a typical drama involves a dispute over someone’s lawnmower.

The stranger who shows up unexpectedly in this Arcadia is Fritz (Uli Latukefu), the well-spoken son of the celebrated wrestler Baron To’a (John Tui). Having made good overseas, he now plans to sell the house where his uncle Otto (Nathaniel Lee) is still living. Complications arise when a “wrestling belt” won by the late Baron disappears and Otto refuses to move on until it is recovered.

Fritz, who apparently played rugby at one point, has inherited some of his father’s physical abilities, but he’s conflict-averse, priding himself on his psychological insights and negotiating skills. He also boasts an unusually fancy vocabulary, insisting he doesn’t want to be “antagonistic” and referring to a potential bout of mayhem as a “colourful commotion”.

Perhaps, as Otto surmises, he’s spent too long in Australia, although part of the charm of John Argall’s script is that every character can be counted on for a memorable turn of phrase. Reliant on stuntwork rather than digital effects, the hand-to-hand brawls are a winning mix of the stylised and the semi-plausible, with homely items such as paint tins and pool cues used as weapons in a manner that harks back to the heyday of Jackie Chan.

Invariably, the characters survive to fight another day. Indeed, after some of the more brutal bouts of mayhem they appear to come off without a scratch, though at other times their injuries are depicted with a realism which is a source of comedy in itself.

The shifts in and out of realism give the film a throwaway quality that is partly an asset and partly not. The backstory that drives the plot is never more than loosely sketched and the emotional stakes don’t mount in the manner we would expect of a Hollywood movie, or one by Waititi for that matter.

There are points when The Legend of Baron To’a feels like one big in-joke, designed mainly to entertain the filmmakers, along with viewers who know the setting well enough to get an automatic kick out of seeing extravagant action sequences staged in their own backyard.

But even to outsiders the film has the charm of a homemade object, not quite like anything else. Something which may strike Australians especially is the gentleness that persists under the most unlikely circumstances: even the most hectic action sequences have little of the hard-sell spirit of our own Fat Pizza.