The lingering threat of Trump has yet to vanish

For a journalist as thorough and exacting as Bob Woodward, the coda to Rage, his second book on the Trump presidency, was stunning. The greatest threat to the presidency “was Trump himself”, and “Trump was the wrong man for the job”. That Trump incited the insurrection against the Capitol, which was intended to disrupt the sealing of Joe Biden’s election victory, proved the point and led the House of Representatives to impeach Trump. But the Senate acquitted.

The masterful and explosive reporting in Peril by Woodward, now teamed with Robert Costa, also of The Washington Post, convicts Trump of being unfit for office. 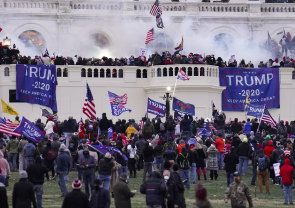 Peril joins the searing I Alone Can Fix It by Phil Rucker and Carol Leonnig, documenting Trump’s threat to the Republic. They show not only how Trump wallowed in denial at his election loss – “Let it go”, both Hope Hicks and Ivanka Trump implored – but his compulsive immersion in the Big Lie that the election was stolen.

Trump was warned throughout 2020 that his mismanagement of COVID-19, his ego, and his extremism would lose him swing-vote suburbs and the election. Attorney-General Bill Barr: “Every time you are out there, you’re talking about your goddamn grievances. They’re worried about their future.”

All Trump’s obsessive character tics are back. The Oval Office drowns in the president’s screaming rages. The Secretary of Defence is told that “The president is really pissed, and really mad, and he is going to rip your face off”. He does. The office is routinely defiled, filthy with obscenities; oh, for a simple sex scandal.

No norm of governance is untouched. A few days after the election, General Mark Milley, Chairman of the Joint Chiefs of Staff, is presented with a memo, signed by Trump, ordering a full withdrawal from Somalia and Afghanistan. Neither the National Security Advisor nor the Secretary of Defence know about it. The approval process required by law was not done. The memo originated with Trump’s former head of personnel. Milley stopped it.

There has been much reporting on the bombshell revelations that Milley called his opposite in China, General Li, twice: to assure him that the US was stable after the election and the insurrection on January 6, and that the country was not going to attack China.

Many believe Milley committed treason and usurped the president’s authority. However, a proper reading confirms that Milley wanted to ensure that the Chinese did not misunderstand what was occurring in Washington and consequently make a catastrophic decision. Milley was protecting America from war in the last days of an unstable president.

Woodward and Costa absolutely deliver the goods. First, a transcript of House Speaker Nancy Pelosi’s call with Milley, immediately after the attack on the Capitol, to ensure that Trump could not initiate a war or use nuclear weapons. We have never read such a verbatim record before, and it is urgent, terrifying and breathtaking.

Second, they have the legal memo provided to Trump that outlines how vice-president Pence could – must – corrupt the counting of the Electoral College votes on January 6 and deliver the election to Trump.

Trump monstered Pence mercilessly to violate his oath to uphold the constitution, and expertly tortured him by pushing his buttons. First: “Wouldn’t it be almost cool to have that power” to overturn the election? Then: “I don’t want to be your friend any more … You’ve betrayed us. I made you. You were nothing. Your career is over” if you don’t do this.

Pence is a hero because he rejected a traitorous act that would have ended America’s democracy.

Peril is also about Biden’s campaign and early months in office. Biden ran to preserve “the soul of America”, and because, “This guy just isn’t really an American president”. Biden wants to have a transformational presidency. We get a good sense of how he works.

Peril chronicles Biden’s decision to end the war in Afghanistan but does not cover the debacle in Kabul. Yet it does capture the intelligence failure: Afghanistan could collapse “in months to years”. Not over a weekend.

Woodward and Costa leave no doubt that Trump is not done. He wants to come back in 2024 – not for the country but, as always, for himself. Trump’s campaign advisor: “I don’t think he sees it as a comeback. He sees it as vengeance.”

Woodward and Costa make it crystal clear: “Could Trump work his will again? Were there any limits to what he and his supporters might do put him back in power. Peril remains.“

Bruce Wolpe is a Senior Fellow (non-resident) at the United States Studies Centre at the University of Sydney.

The Booklist is a weekly newsletter for book lovers from books editor Jason Steger. Get it delivered every Friday.