The MAFS nude photo scandal is bad, but what will happen now?

Married At First Sight seasons are typically defined by their scandals – a flashpoint that hooks the audience in and sparks a wider debate about social, political and cultural issues.

This season’s most-talked-about drama has centred on bride Olivia Frazer and her decision to share a nude image of fellow MAFS bride Domenica Calarco with the rest of the group. 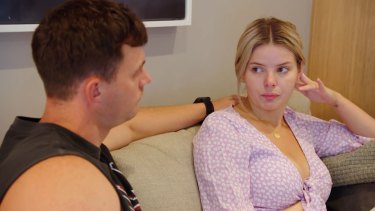 Olivia Frazer has been criticised for her decision to share a nude image of fellow MAFS bride Domenica Calarco.

The image was sourced from Calarco’s OnlyFans page before Frazer shared it without Calarco’s consent. The move triggered a wave of support for Calarco, as well as a rush to condemn Frazer.

“On Saturday 19 March 2022, a complaint was made to officers at Inner West Police Area Command about the alleged distribution of an image without consent that occurred in late 2021,” said a NSW Police spokesperson in a statement. Inquiries are continuing and no further information is available at this stage.”

The controversy has brought into focus the consequences of what happens when a reality TV show storyline spills over into the real world – and how it should be dealt with.

Since the nude photo scandal began playing out on air, a Change.org petition has been started by viewers, demanding the eSafety Commissioner take immediate action for image-based abuse.

“This meets the official definition of ‘image-based abuse’ outlined on the e-Safety Commissioner’s website.”

In order for the petition to move forward, a complaint must be made by Calarco to the eSafety Commissioner. 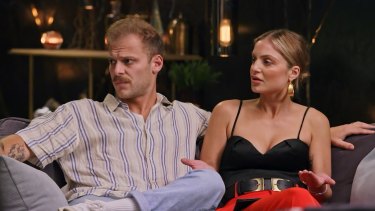 In a statement, a spokesperson for the organisation said: “Once we receive a report from a victim or their representative, eSafety can initiate an investigation to determine whether the content constitutes image-based abuse.

“We understand that image-based abuse can be very distressing, and we’re here to support victims and find the best way to help, in some cases also act against people who post, or threaten to post, an intimate image without consent.”

At time of writing, the petition had attracted more than 120,000 signatures. There are also calls for Frazer, who is currently studying education, to be banned from teaching.

“We can all definitely agree that Olivia’s behaviour was problematic, and certainly no one would condone her behaviour,” says psychologist Sharon Draper, who specialises in relationships and is familiar with the show.

“It is important though to separate what we’re feeling in response to seeing this behaviour on a reality show, and how we seek to ‘right’ the wrong we believe has been committed.”

When approached about the public response to Frazer’s actions Nine, publisher of this masthead, said in a comment: “Nine and Endemol Shine takes its obligations in respect to the health and wellbeing of the participants of this program extremely seriously. All participants have access to the show psychologist during filming, during the broadcast and once the program has ended.”

“This service gives participants access to clinicians who have been specifically engaged to support those involved in the program in relation to their experiences.”

While participant wellbeing is paramount, it’s also worth noting that the nude photo scandal has been heavily promoted by the network over the past week.

For MAFS, a show more used to dealing with cheating couples and partner swaps, than potential image-based offences, the scandal has drifted into difficult territory. Sunday night’s episode was dominated by a discussion of the nude photo scandal, with responsibility for holding Frazer accountable falling to relationship expert John Aiken.

“A photo being circulated around the group without the person knowing, does anyone see an issue with that? ” asked Aiken during the episode.

“The group is looking at the photo and talking about the photo, behind Domenica’s back, and then it was brought up at a dinner party, and she was ambushed by it, and that is a very real issue and it’s not OK,” he said.

Should such a complex issue have been dealt with off-air?

“While we may sometimes feel like judge, jury and executioner, we do need to let these issues be dealt with in due course by the correct people,” says Draper.

“The show itself will no doubt be having these conversations behind the scenes.”