The most regretful of all Eight-Minute Regrets? Not DiCaprio

Eight-Minute Regret happens to me a lot. It happened last month with the Academy Awards. I was excited about watching them on TV: I had a full media blackout all day – the entire outside world could have been completely vapourised and I would have been bouncing around the house, going, “Oooooo, I hope 1917 wins for Best Sound-Mix. The soundscape was visceral!” But then I sat down to watch it at night and exactly eight minutes in … regret. I thought, “Hang on. I hate the Oscars. I’ve always hated the Oscars! Why do I watch them every year?” Then I quickly switched off, at the 117th cutaway to Leo DiCaprio’s smarmy smuggo head. 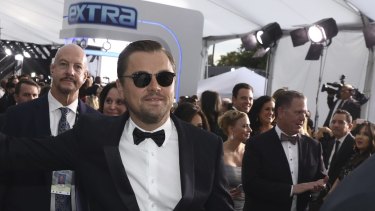 Or the twilight picnic concert in a park two weeks back. I was excited about going: I thought, “OK, normally I’m not crazy about sitting on a damp rug, eating food off the ground and listening to live music in a poorly amplified non-acoustic setting but, this time, it’s going to be fun!” Eight minutes in … regret. My buttocks atrophied, I got a mouthful of trout 'n’ grit dip, and I rested my hand on a bull-ants nest. Though thankfully I immediately shifted my hand away, into a freshly-laid dog turd, which really soothed the pain.

Eight-Minute Regret happens to me with all kinds of things. Air travel, BBC costume dramas, paddleboat rides, food-outlet hot dogs, a soul-crushingly dull friend of a friend who I bump into now and then – eight minutes of small talk, soul crushed. And the most regretful of all Eight-Minute Regrets: Chadstone Shopping Centre. I needed to buy new undies: my old ones were so baggy and stretched I could take them off over my head. And I thought, “OK, normally I loathe going to Chaddy, but this time it’ll be different, this time it’ll be great." And it was great – for seven minutes, 59 seconds. Got an excellent park in a near-empty car park (thank you, coronavirus). And when I went in, I found undies on sale: stripy ones, which are always flattering on me, they make me look taller. Five minutes in, I was happy, I was ready to pay and leave – but I spotted a shirt I liked, so I tried it on. It took 20 seconds to try on, three minutes to undo all the fiddly little shirt buttons.

Exactly eight minutes in … regret. I started feeling sluggish, irritable, dopey from that mystery gas they pump through the aircon to make customers buy shirts, bed linen and gyozas in that order. Had to get out: I stumbled to the counter, paid for my stuff, ran to the car, drove home … and when I got home, I realised they’d left the security tag on the shirt.

So I drove back the next day, plunging into an Eight-Minute-Regret-Nightmare of Recurring-Chaddyness. Got an even better park in the car park (thank you rapidly escalating pandemic). Ran in. Got the tag removed. Was all ready to leave – but I spotted a nice pair of pants (40 seconds to try on, seven minutes to get my shoes out of the pants legs because I was too lazy to take them off first). Exactly eight minutes in: regret. Bought the pants, rushed out, drove home … they’d left the security tag on the pants.

Never going back. I’ll just watch a YouTube tutorial on how to remove security tags using a barbecue lighter and a fork. It’s only 4.42 minutes long. I should be able to get through it, regretless.

Danny Katz is a Melbourne humourist.