The Queen attends Remembrance service in an empty Westminster Abbey

EMILY ANDREWS: A Remembrance Sunday like no other as the Queen attends ‘deeply personal’ service in an empty Westminster Abbey before visit to the Cenotaph to mark 100 years since its unveiling

For the 68 years of her reign, the Queen has led Remembrance tributes to those who have made the ultimate sacrifice for their country, and not even Covid-19 could deter her from her solemn duty.

Today, she and other senior Royals will preside at a reduced service at the Cenotaph, marking 100 years since its unveiling. And last week, the Monarch made her own poignant act of remembrance at Westminster Abbey, where she wore a mask in public for the first time.

Last night it was revealed that the Queen attended a ‘deeply personal’ service at the Abbey where she married in 1947, and laid a floral tribute based on her wedding bouquet on the grave of the Unknown Warrior. 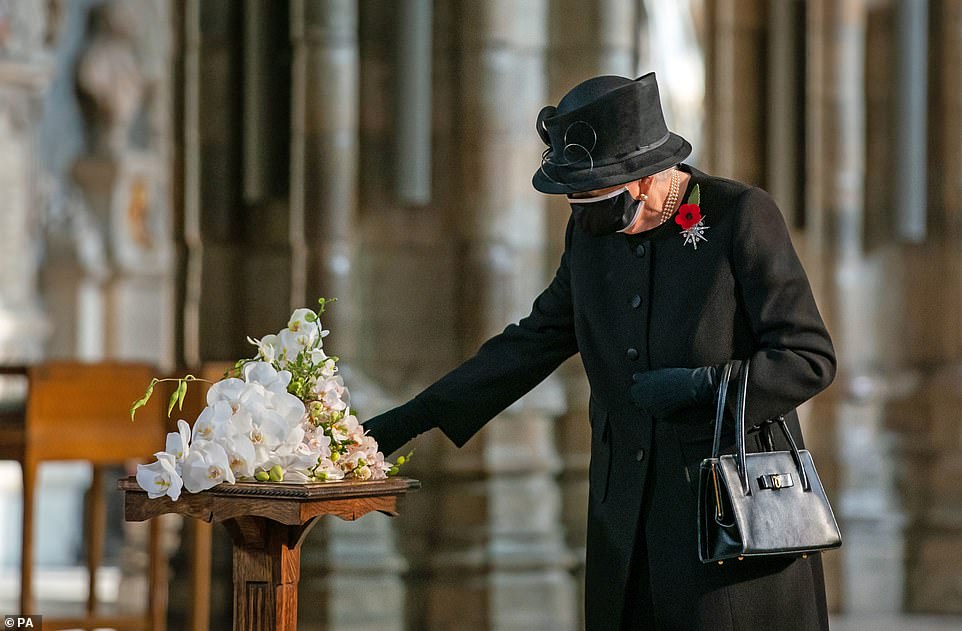 Commemoration: The Queen inspects a bouquet of flowers to be placed at the grave of the Unknown Warrior by her Equerry, Lieutenant Colonel Nana Kofi Twumasi-Ankrah 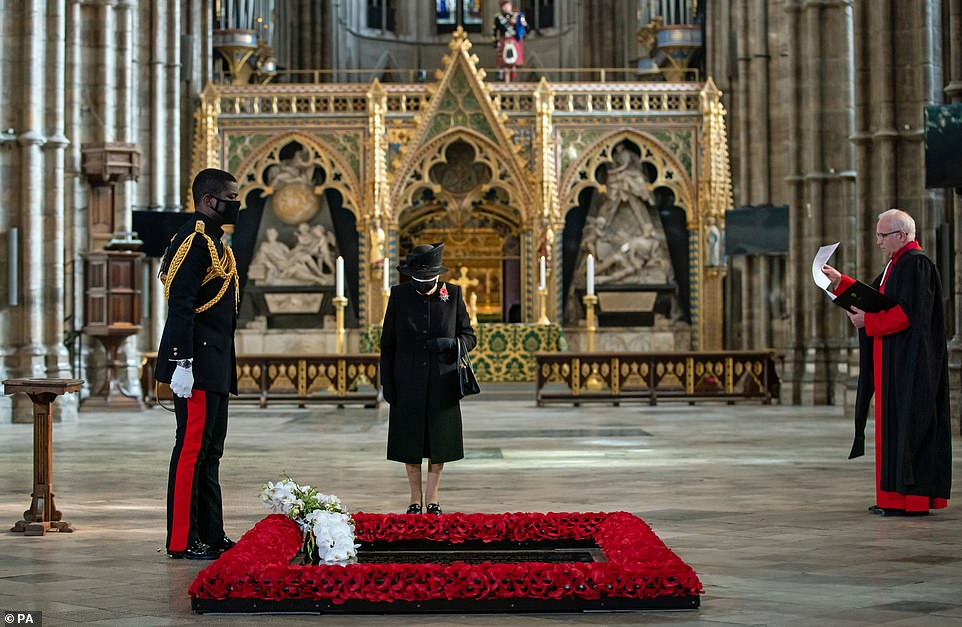 Paying her respects: The Dean of Westminster Abbey David Hoyle (right) watches as The Queen’s Equerry, Lieutenant Colonel Nana Kofi Twumasi-Ankrah, places a bouquet of flowers at the grave of the Unknown Warrior in front of the Queen in Westminster Abbey 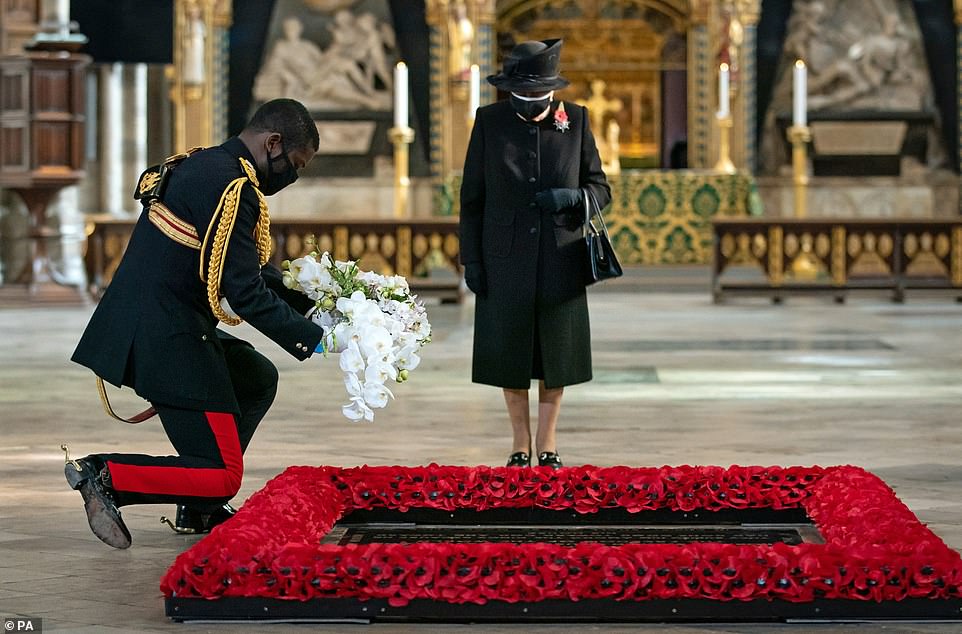 Paying respects: The Queen’s Equerry, Lieutenant Colonel Nana Kofi Twumasi-Ankrah, places a bouquet of flowers at the grave of the Unknown Warrior on behalf of the Queen during a ceremony at Westminster Abbey 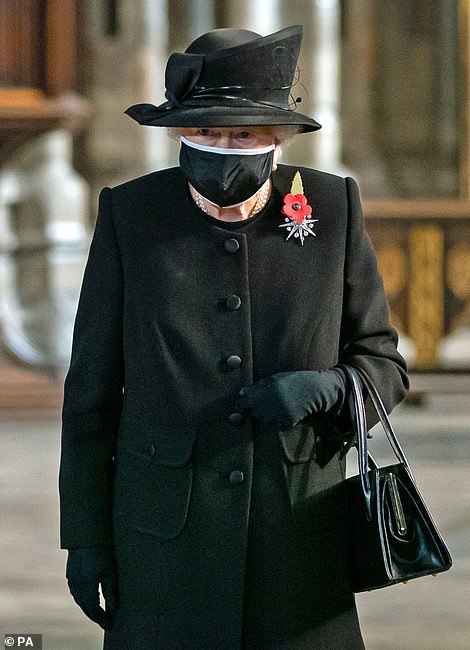 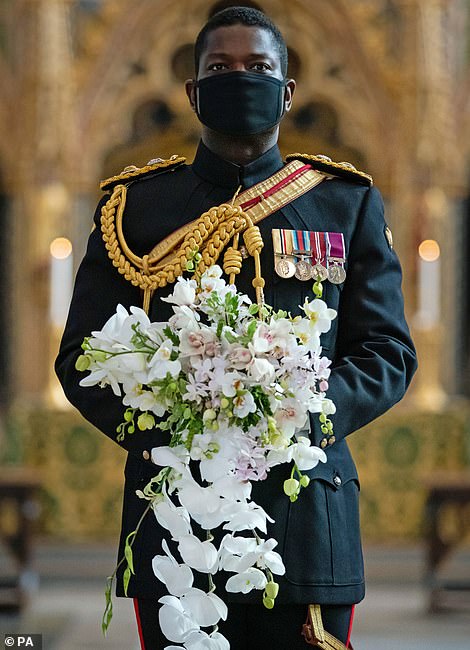 Tribute: The Queen pays tribute to the Unknown Warrior while her Equerry, Lieutenant Colonel Nana Kofi Twumasi-Ankrah, carries a bouquet of flowers to place at his grave

The Unknown Warrior, laid among kings and heroes 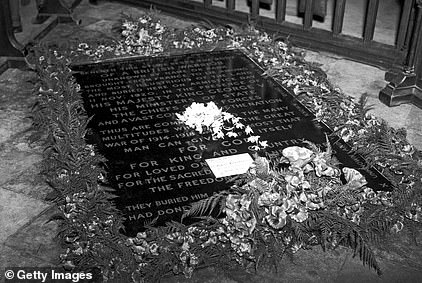 The Grave of the Unknown Warrior was inspired by the Reverend David Railton, who, while serving as a chaplain on the Western Front during the First World War, saw a grave marked by a rough cross and a pencil-written note saying: ‘An Unknown British Soldier.’

After that devastating conflict, he wrote to the then Dean of Westminster, Herbert Ryle, with a proposal for a memorial to the fallen with no known grave to lie among the kings and national heroes in the Abbey. His idea drew support from King George V and the Prime Minister David Lloyd George.

The body was chosen from four unknown British servicemen who had been exhumed from four battle areas and transported back to Britain.

On November 11, 1920, the coffin was draped with a Union Flag and taken on a gun carriage to the Cenotaph (from the Greek ‘kenos’ and ‘taphos’, meaning empty tomb), where the Queen’s grandfather, George V, placed a wreath upon it.

The King, who was there with his son, the future King George VI, watched as the warrior was buried at the Abbey and he dropped a handful of earth from France on to his coffin. It was then topped with an engraved tombstone in black Belgian marble.

It echoes a gesture she made on her wedding day and follows a tradition set by her mother in 1923 – that Royal brides leave their bouquets on the black marble tomb.

The only permitted church service will be at the Abbey on Wednesday, Armistice Day, but the Queen’s medical experts, exercising an abundance of caution, have advised the 94-year-old not to attend.

Undaunted, she requested a private ceremony to pay her own tribute to the grave of the Unknown Warrior – the symbol of all those lost in the Great War and beyond – following her return to London for the first time since March.

Her Majesty wore a black coat and hat along with black Anello & Davide shoes and a sombre black mask with white trimming designed by her long-time dresser Angela Kelly. Government restrictions require face coverings in any place of worship.

Dr David Hoyle, the Dean of Westminster, conducted the ceremony on Wednesday and said: ‘It was wonderful to see Her Majesty in such good spirits and good health.

This is a moment where the Abbey does its job as the national place of worship. The story of the Unknown Warrior touches us all.

‘It is very special for Her Majesty to do this, given the current restrictions. I know, because people tell me, that these moments when Her Majesty is in the Abbey gives us a sense of renewed purpose and encouragement. It makes us feel very privileged.’

The Prince of Wales and Duchess of Cornwall, who have taken part in a pre-recorded Festival of Remembrance, will attend the Abbey service to commemorate the 100th anniversary of the Unknown Warrior on Armistice Day.

A Royal source said: ‘The grave of the Unknown Warrior is as relevant and poignant today as it was when Her Majesty’s grandfather and father stood in the Abbey at its side 100 years ago. It holds enormous significance for the country and the Royal Family.

‘The Queen was keen that the centenary was marked appropriately. A simple but deeply personal act reflecting a tradition started by her mother 97 years ago felt the right thing to do.’

The brief service was attended by just the Dean and the Queen’s equerry, Lieutenant-Colonel Nana Kofi Twumasi-Ankrah, after doctors advised on limiting the numbers. 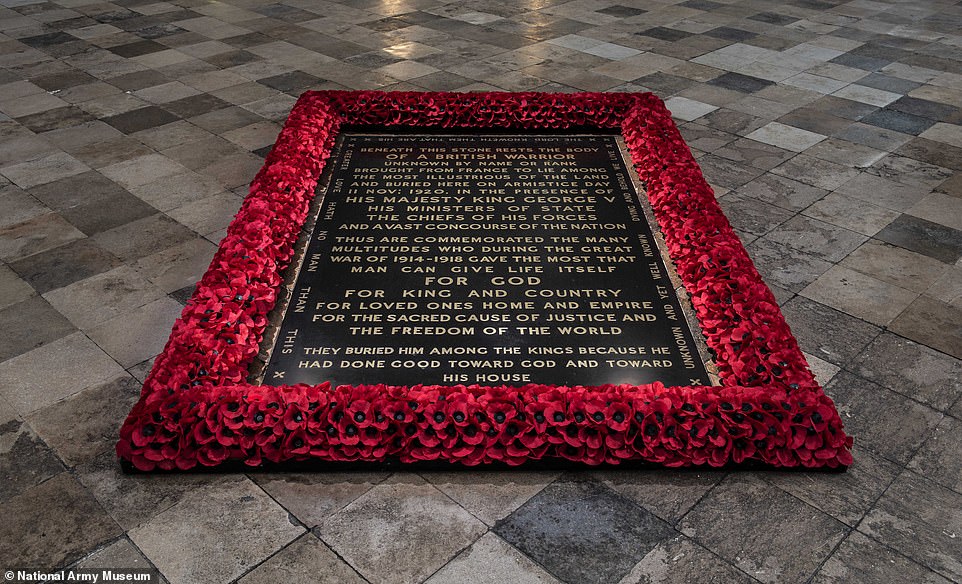 Tribute: The Unknown Soldier was buried at Westminster Abbey on 11 November 1920 but lockdown restrictions mean commemorations had to take place in advance. File image 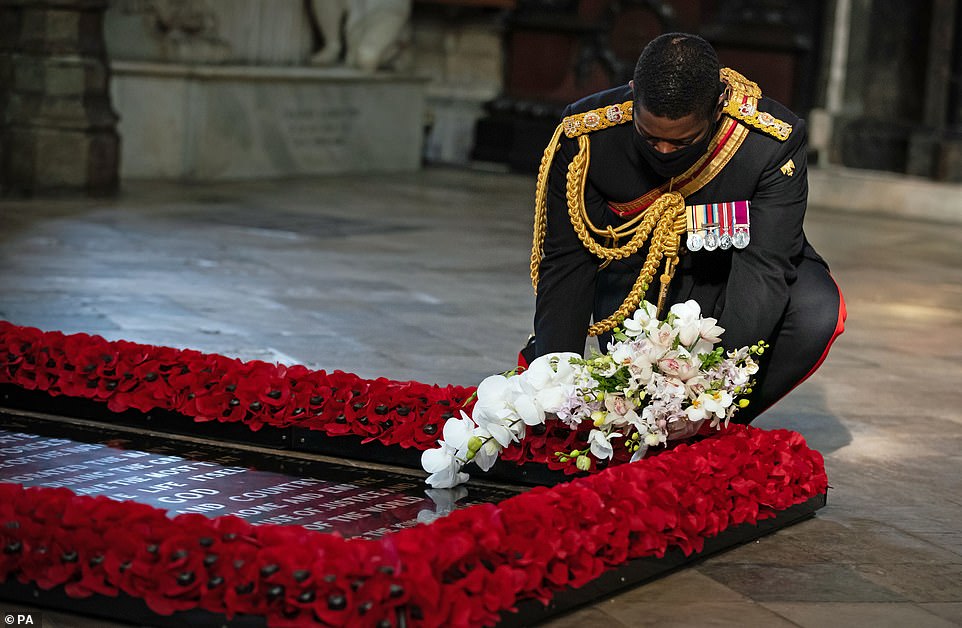 Tribute: Lieutenant Colonel Nana Kofi Twumasi-Ankrah places a bouquet of flowers at the grave of the Unknown Warrior during a ceremony in Westminster Abbey 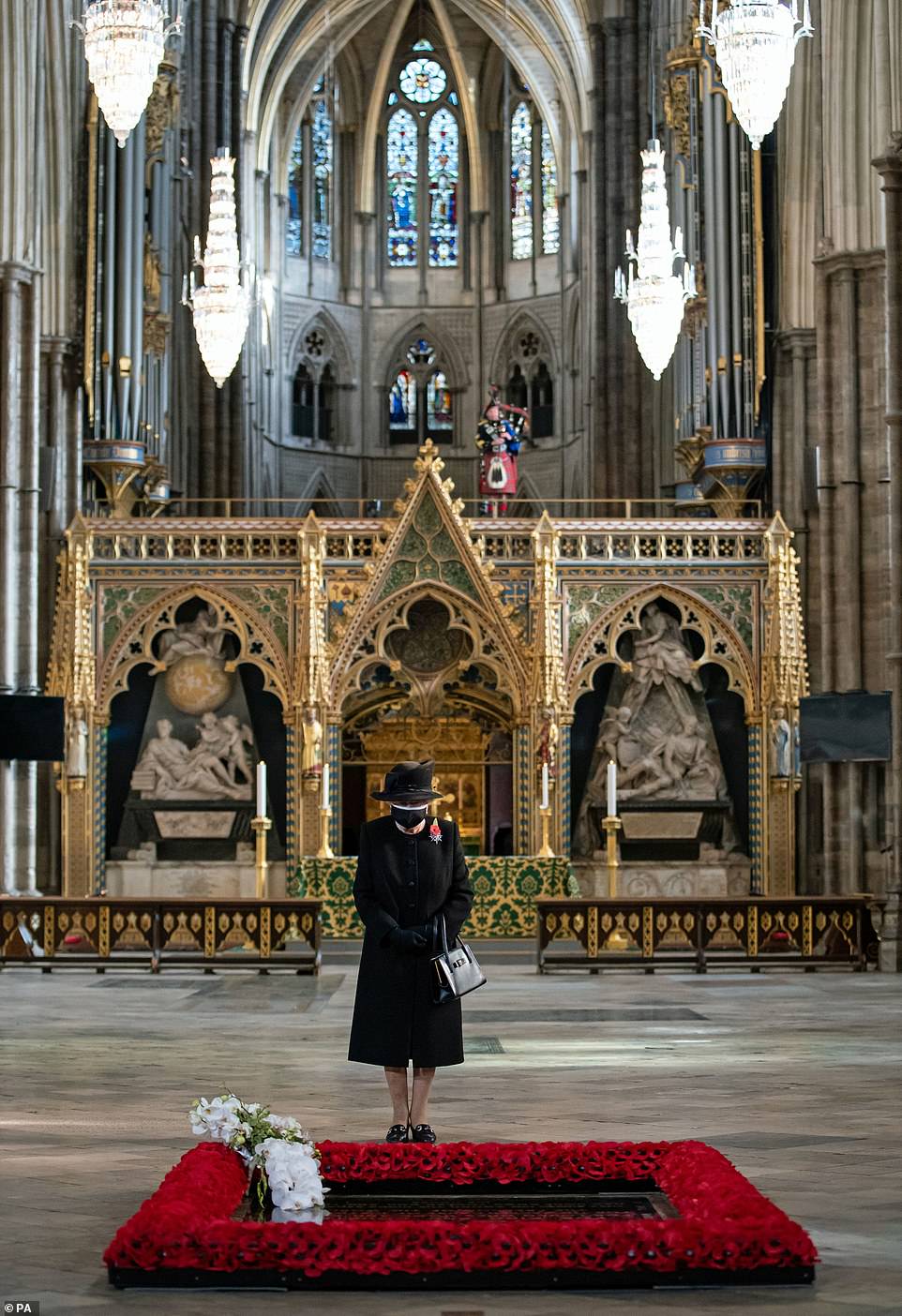 Tribute: The Queen inspects a bouquet of flowers placed on her behalf at the grave of the Unknown Warrior by her Equerry 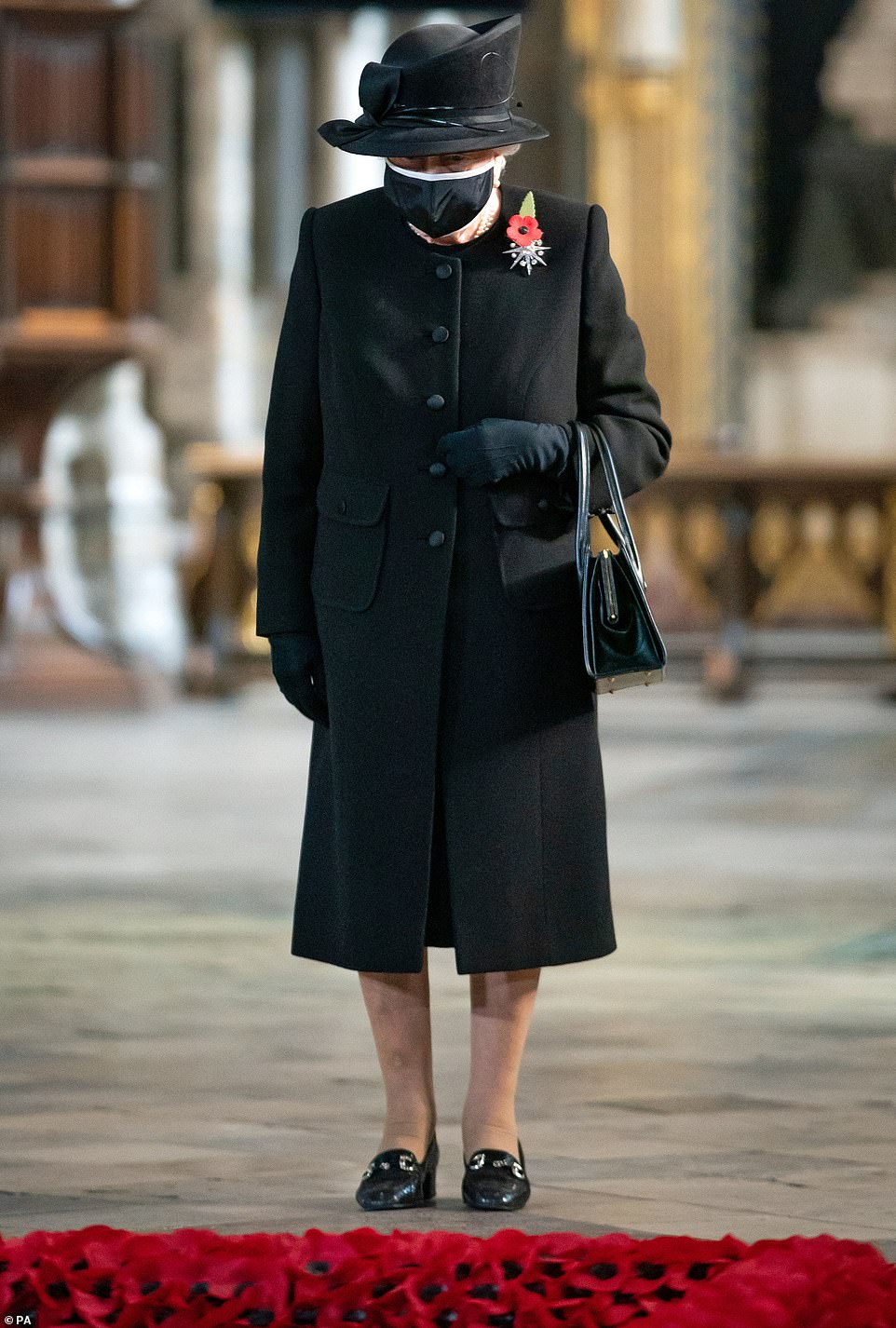 Tribute: The Queen commemmorates the centenary of the burial of the Unknown Warrior, an unidentified British serviceman who died in WW1, in Westminster Abbey on Wednesday

After the Queen touched her bouquet, which featured orchids and myrtle, the equerry laid it on a corner of the grave, and after a prayer from the Dean the Monarch bowed her head.

The Queen’s Piper, Major Richard Grisdale, played a lament as Her Majesty, wearing a poppy and the Jardine star brooch, was left in solemn reflection.

Today’s Remembrance Service at the Cenotaph will be broadcast on BBC1 from 10.15am.

Bouquet was a replica of the Queen’s wedding flowers 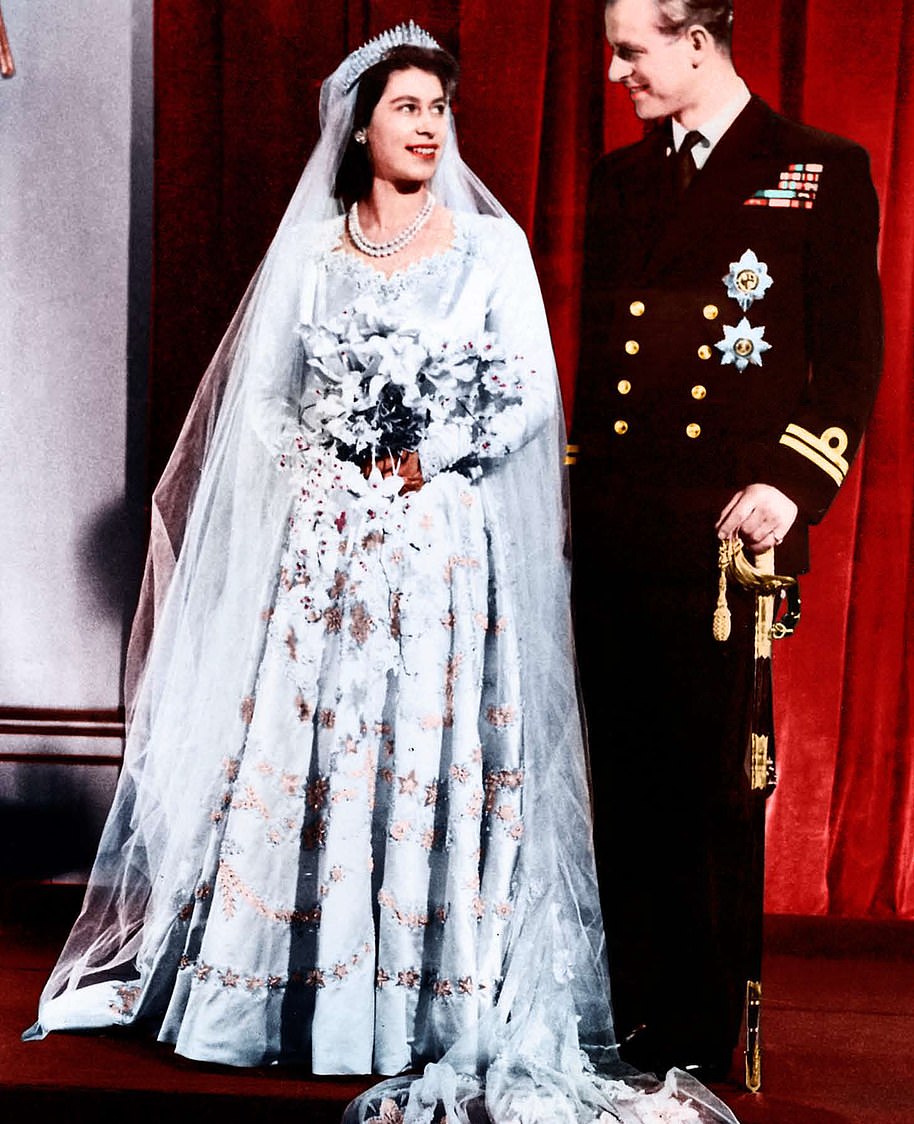 The future Queen marries the Duke of Edinburgh on November 20, 1947, pictured together on their wedding day

It has become a tradition for Royal brides to place their wedding bouquets on the tomb of the Unknown Warrior as a mark of respect.

It was started by the Queen Mother who, in 1923, left her flowers on the grave in tribute to her brother Captain Fergus Bowes-Lyon who was killed during the First World War. She then walked down the Westminster Abbey aisle without them to marry Prince Albert, later George VI.

The flowers the Queen dedicated last week were a replica of her own wedding bouquet, which she had laid on the grave 73 years ago.

Then, her all-white bouquet was made up of three kinds of British-grown orchids – cattleya, odontoglossum and cypripedium – to which was added a sprig of myrtle from Osborne House, Queen Victoria’s house on the Isle of Wight.

This year’s bouquet, made by the Buckingham Palace florist, comprised white phalaenopsis with white and pale pink cymbidium orchids, plus pale green myrtle.