The sex addicts who don’t have a sex life 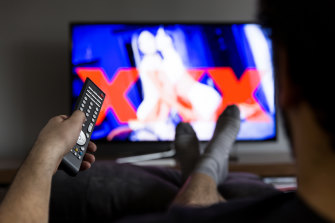 Even if they experience real sex, they find it disappointing. Hall says: "Some of these youngsters are amazed that their partners have body hair or sweat or their flesh is soft. That they don't orgasm on touch. Real sex – rather than on a screen – smells in a way that is different from what they imagined. They are used to a sexual experience that isn't messy or unclean."

A 2014 study from Cambridge University found that addicts watching pornography experience the same compulsive brain activity as drug addicts when confronted with their drug of choice. Last year, 38-year-old Andrew Barnbrook defrauded his employer of $480,560 in order to fund his habit of talking to a sex-cam model.

Garza was jolted into tackling her behaviour when a friend – who was attending AA meetings – pointed out her compulsive behaviours mirrored his own towards alcohol. She began attending Sex and Love Addicts Anonymous meetings.

She says: "I do recommend meetings to other people as a start, but I tried a number of different things to deal with those underlying emotions I'd been running from for so long. Meditation, Thai kick-boxing, self-help books, talk therapy, a seven-day retreat called the Hoffman Process, and writing about my experiences were all tools that helped in their own way."

Paula Hall says pornography has made the nation "sexually obese". She says: "We are reaching for sexual material when we aren't even aroused, in the same way a food addict eats when they aren't hungry."

*Names have been changed