The Witcher Season 2 has fleshed out almost every question fans had in the first season. The season finale finally reveals the key to Ciri and why Nilfgaard was adamant about finding her. Emperor Emhyr Var Emreis remained a mysterious and unseen character throughout The Witcher Season 1 and The Witcher Season 2. But fans get the jaw-dropping truth to who he is and how it drastically changes the tide of the storyline.

[Spoiler alert: This article contains spoilers for The Witcher Season 2.]

Geralt questions why Nilfaard wants Ciri in ‘The Witcher’ Season 2

In episode 8 of the second season, everything becomes more clear. Since the first season, Nilfgaard had a dedicated plan to take over Cintra, with their main objective to find Ciri. But as Ciri’s powers grew and were further explored in season 2, the question remained; how did Nilfgaard know about her destiny?

After Ciri shows her true powers and can conjure a monolith at Kaer Morhen to open a portal to another sphere, Geralt is bothered by something. After the events, Geralt raises the question to Ciri and Yennefer. When did Nilfgaard realize Ciri was the key to their future? The series never fully explains why Fringilla and Cahir are devoted to Emperor Emhyr to finding Ciri. The final twist revealed the truth.

Duny is alive and is the White Flame

Emperor Emhyr’s identity has never been revealed in the two seasons. But fans get the shock of their life when Emperor Emhyr makes his appearance at the very end of The Witcher Season 2, Episode 8. Cahir and Fringilla follow behind him in the throne room and explain their decision to kill Francesca Findabair’s baby.

While they take credit for the action, Emperor Emhyr reveals they are lying. It was his decision to send for the baby to be killed, and he says he can no longer trust Fringilla and Cahir to help him. Emperor Emhyr says, “It was the best path to helping me find my daughter.”

Emperor Emhyr is actually Duny, Ciri’s father, in a jaw-dropping reveal. He looks the same as when fans first met him in season 1 but instead sported a scar next to his right eye. Duny, being Emperor Emhyr explains why Nilgaard knew of Ciri’s prophecy first and her abilities.

Who is Duny in ‘The Witcher’? 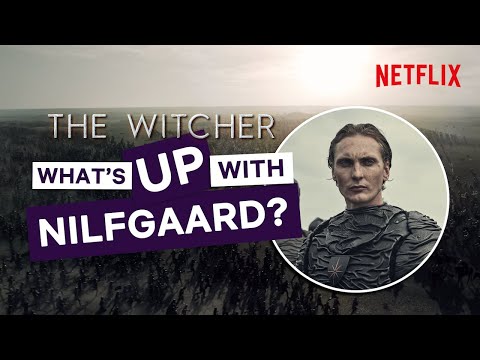 Duny, Urcheon of Erlenwald was first introduced in The Witcher Episode 4. Geralt and Jaskier travel to Cintra for Pavetta’s banquet. The festivities turned to chaos when a knight cursed to look like a porcupine monster claims Pavetta due to the Law of Surprise.

Calanthe’s rejection of their love forces Pavetta to use her magic to protect him. When Calanthe accepts their marriage, the curse is lifted, and Duny becomes human. Later on, fans learn Ciri’s parents died at sea.

Fans got more insight into Pavetta and Duny in The Witcher Season 2 in episode 5. When Triss takes Ciri deep into her subconscious, they see Pavetta and Duny with Ciri as a child. They are discussing the prophecy and plan to leave Cintra to save Ciri.

This small tidbit explains that Duny knew all along about Ciri’s powers and her Elvin bloodline as he is revealed to be Emperor Emhyr in The Witcher Season 2. But now fans wonder how Duny survived the shipwreck and what he did to Pavetta? Furthermore, why is he hellbent on using his daughter for destruction?

The Witcher Season 2 is available to stream on Netflix.