Jack London’s turn-of-the-century tale of a half wolf, half dog’s adventures in both the animal and human world gets another adaptation, this time fully animated and with an all-star voice cast. In a pleasant twist, Netflix’s White Fang is also a Parks and Rec reunion, featuring Nick Offerman and Rashida Jones as a married couple who take White Fang in.

The story of White Fang has been told numerous times, including a 1973 Italian film and a 1993 live-action television series. This isn’t the first time the tale’s been animated either — The Legend Of White Fang was another television series that ran in the early ’90s on Canadian television. But Americans would likely be most familiar with the book’s 1991 film adaptation, starring a young Ethan Hawke and taking liberties with the book’s plot while hewing to its original message about the contentious relationship humans and animals suffer due to greed and cruelty. It’s that element of nature and man trying (and often failing) to interact that drew Nick Offerman to the role, along with this more recent film’s strong message of environmental respect.

As Offerman explained to Deadline Hollywood, "the protagonist in the film is sort of nature, and greed, or consumerism—represented by the Europeans that show up for the gold—that’s a bad influence," he said, adding "I just really appreciate that overall message that if you don’t worry about chasing the gold and be nicer to the elements of nature, we’ll all get along a lot better." 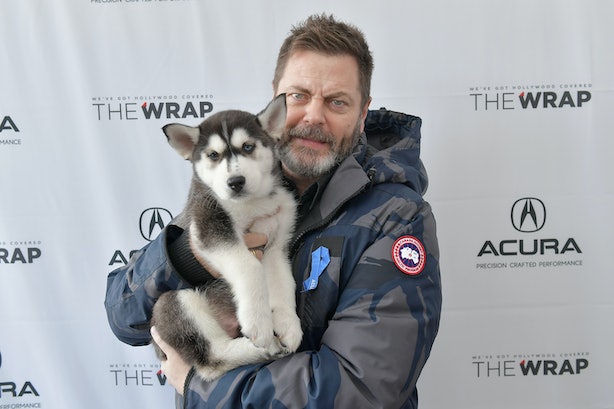 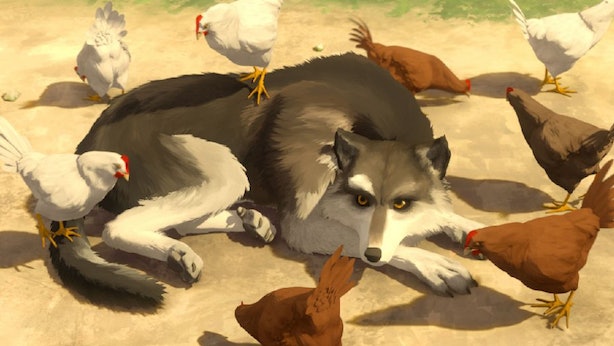 Parks and Rec fans hoping for a live-action reunion any time soon best not hold their breath; none of the show’s main actors are scheduled to appear onscreen together in real life any time soon. But not to despair, because there’s another animated team-up of Shawnee alumni coming soon to theaters. Nick Offerman and Chris Pratt, along with a slew of other celebrities including Charlie Day, Tiffany Haddish, Channing Tatum, and Alison Brie, are all voicing characters in the upcoming The Lego Movie 2: The Second Part. Pratt reprises his role as regular joe Emmet Brickowski, and Offerman joins as Metal Beard, a grizzled Master Builder veteran. The film is slated for release in 2019

In the meantime, the closest thing to a Parks and Rec reunion is the loving couple portrayed by Offerman and Jones in White Fang, available streaming on Netflix on July 6.