These are the most gorgeous pies we’ve ever seen

Edible art! Talented baker charms Instagram with picturesque pies that feature scenes from books and movies like Little Red Riding Hood, A League of their Own and The Little Mermaid

A Southern California baker has wowed social media users with her positively gorgeous pies, which look almost too pretty to eat — though she promises that doesn’t stop her from digging in.

Liz Joy, a self-styled ‘Sugar Artist,’ has a way with baked goods, and sells her artistic cookies, cakes, and macarons through her company, Inspired to Taste.

Lately, she’s been earning even more attention for what she calls her ‘narrative pies,’ which feature characters in detailed scenes that seem ripped right from the walls of a museum. 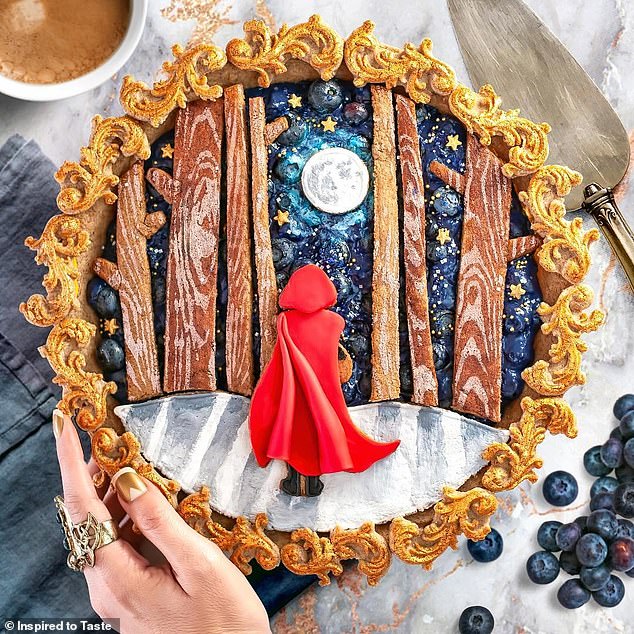 What big teeth you have! Liz Joy, a self-styled ‘Sugar Artist,’ makes some truly incredible pies, like this blueberry one inspired by Little Red Riding Hood 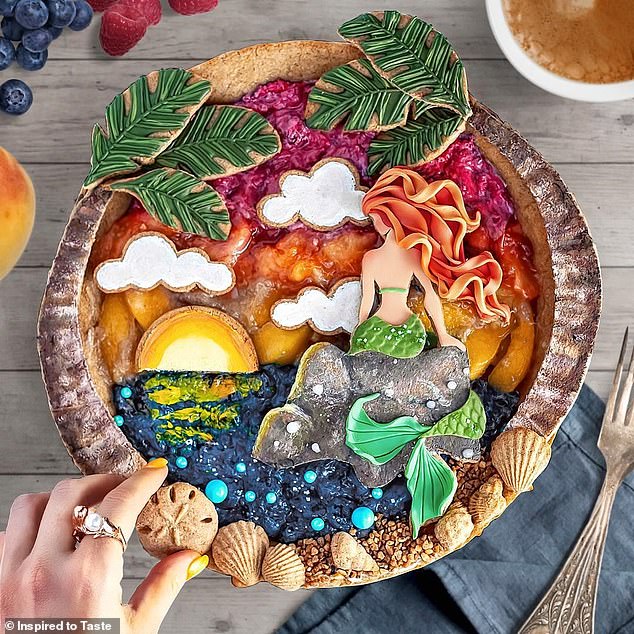 Under the sea! They’re not just gorgeous, though certainly this Little Mermaid one makes for a pretty picture. Each one is also delicious, and she gets to try them all 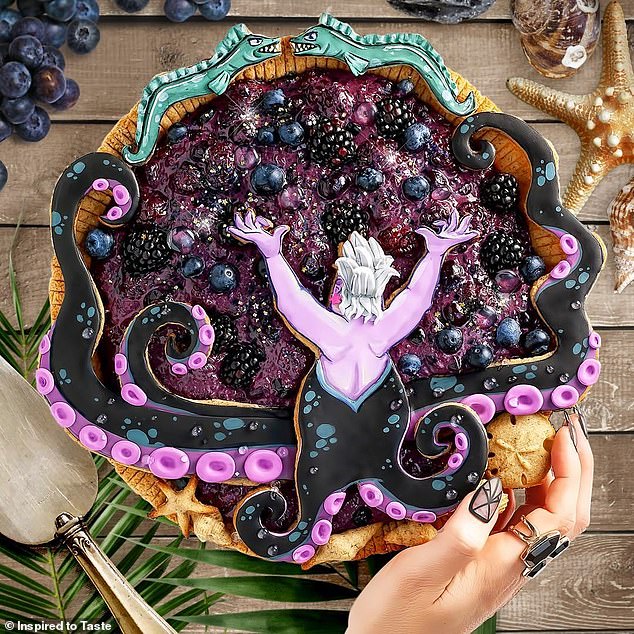 Seriously skillful! Liz, who is based in Southern California, said she’s only recently begun experimenting with these ‘narrative’ pies, like this one with Ursula the sea witch

Liz had already posted pictures of quite a few gorgeous pies with fruity and floral designs before she decided to start telling a story with the dessert’s surface.

Over the summer, she collaborated with fellow Instagrammer @thepieous, who has her own 50,000-strong social media following for her impressive pies.

While @thepieous made a Big Bad Wolf pie, Liz made one with Little Red Riding Hood, showing the little girl’s crimson-caped back as she walked into a dark forest with a swirly, Van Gogh-esque blueberry sky.

She went on to make more narrative pies, including a ‘Rockford Peaches Pie’ with a scene from A League of Their Own.

She’s also done Ursula from The Little Mermaid with blackberries and blueberries, as well as Ariel herself, perched on a rock and looking out at a sunset made of raspberries and peaches.

For Christmas, she plucked a scene from The Nutcracker, painting a ballerina inside a wreath and topping the whole thing with a snow globe dome made of berry-flavored isomalt (a sugar substitute). 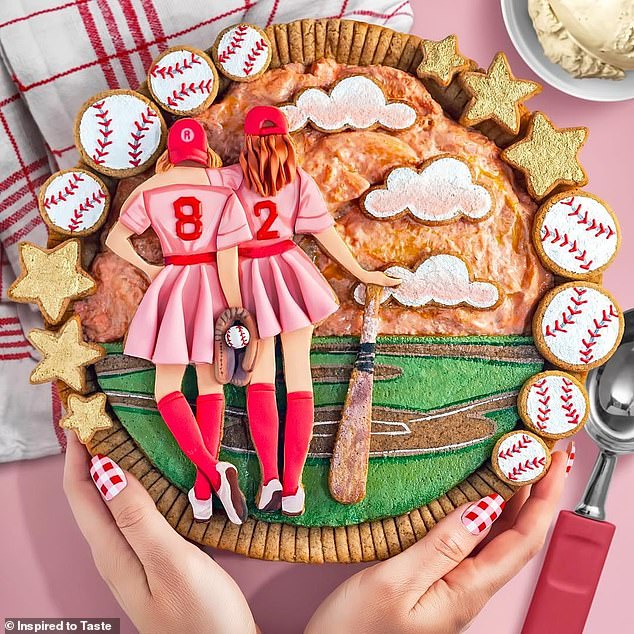 There’s no crying in pie eating! Each one, including this ‘Rockford Peaches Pie’ with a scene from A League of Their Own, takes two to three days to make 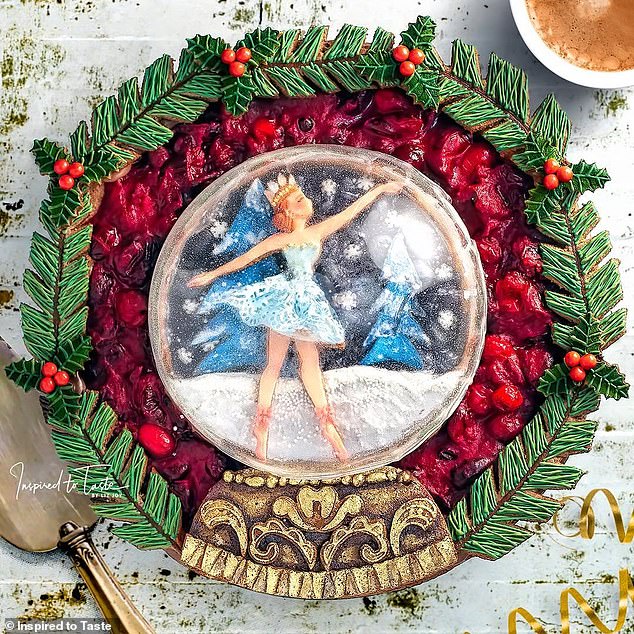 Magical! For Christmas, she made this one with an actual edible snow globe made of a sugar substitute

Liz, who is entirely self-taught, said she figured out how to bake and decorate by incorporating things she’d learned from blogs and YouTube videos.

It also helps that she has a background in art, having spent a decade as an Art Director at a Hollywood agency before launching Inspired to Taste.

Speaking to DailyMail.com, she said that each of her pies take a lot of work from start to finish.

‘Pies generally take me at least a couple of days from concept to completion,’ she said. ‘That’s assuming I don’t destroy anything in the process.

‘I’m always interested in learning new techniques and materials, and the trial-and-error process can tend to be a bit time consuming and chaotic. I generally learn the most through trial-and-error and sheer stubbornness.’ 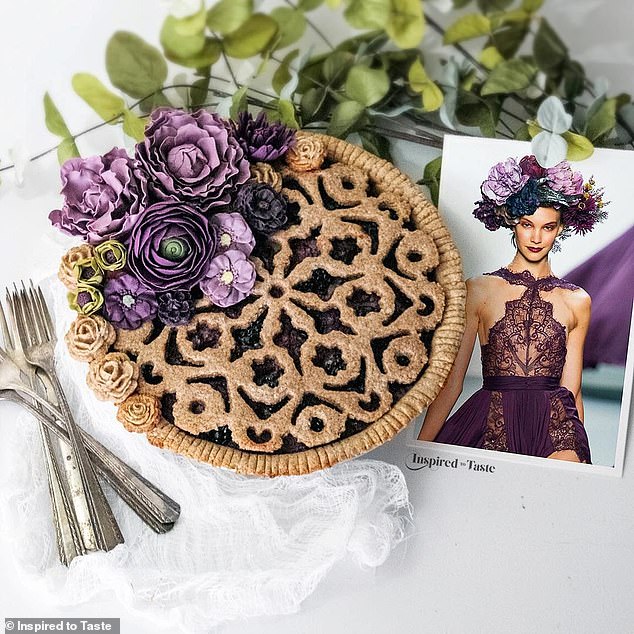 Such a chic dessert! She also takes a lot of inspiration from fashion, modeling this pie off a runway look 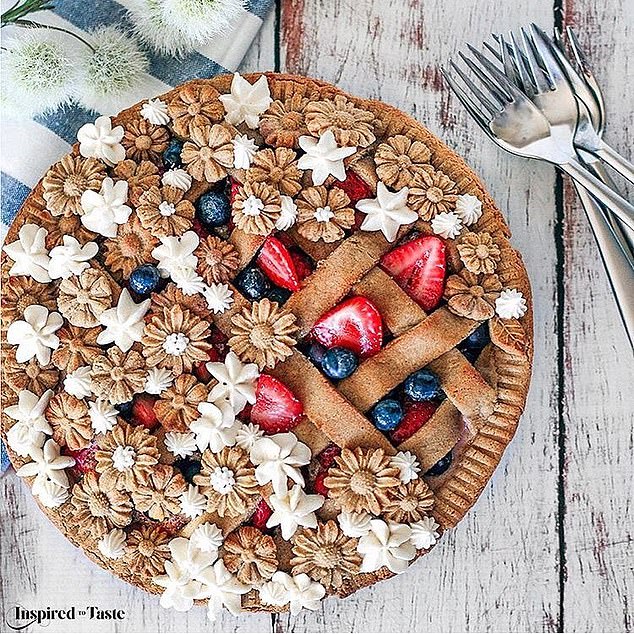 Yum! She said she learns through trial and error and bakes the pieces separately

Something that’s nice about pies, she said, is that the general shape is dictated from the get-go.

‘One of the things I like about pie art is that I know I’ll be working with a round canvas. So I’m always keeping that in the back of my mind, and I stay on the lookout for ideas that fit into that curved frame,’ she explained.

For each pie, she starts with a loose sketch so she can figure out all the different design elements. With that in mind, she then figures out flavors, materials, and techniques.

‘I then make templates for all the pieces, which I hand-cup and bake separately,’ she said. ‘I usually blind bake the bottom crust, make the filling(s) stovetop, then piece the whole edible scene together once the individual elements have been decorated.

‘I attach the decorations with either chocolate, white chocolate, or melted caramel, depending on what coordinates best with the given pie.’ 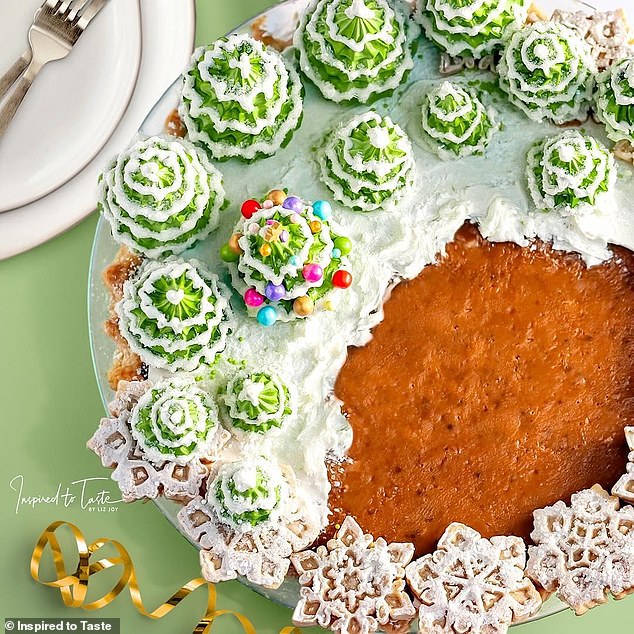 ‘I’ve been lucky enough to eat at least a couple slices of almost every pie I’ve posted to Instagram,’ she said 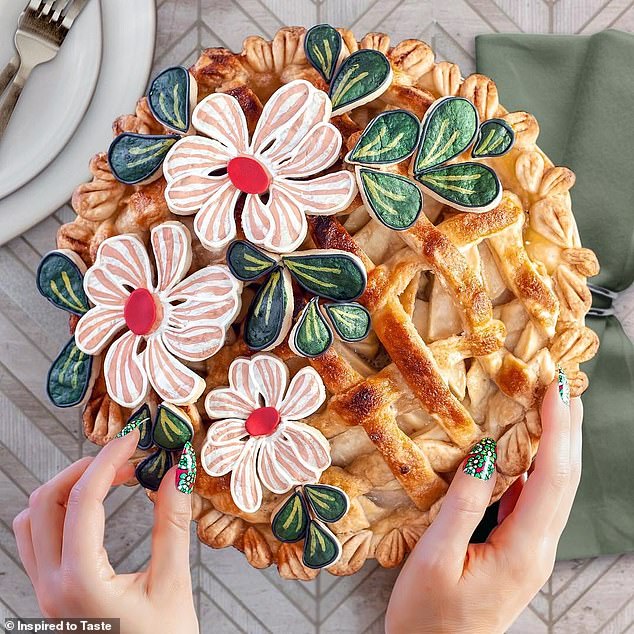 Keeping a record: She doesn’t mind slicing into them as look as she has taken a picture first 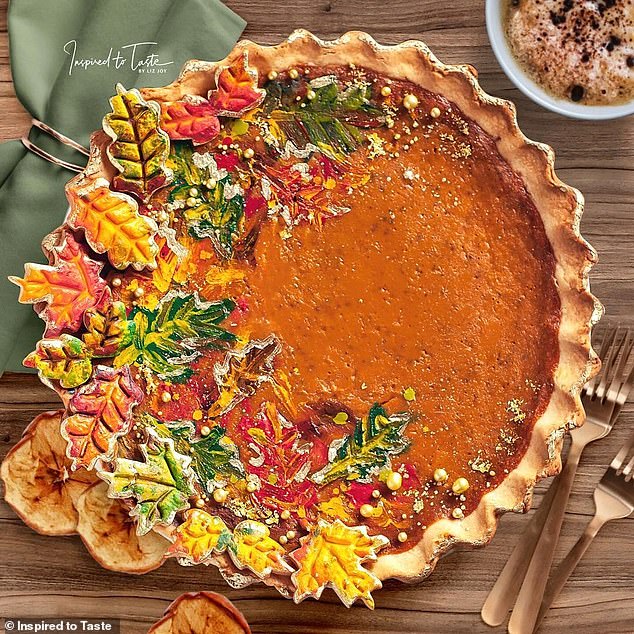 So popular! Her confections, including cakes and cookies, have earned her a huge social media following

So far, her Little Red Riding Hood pie from over the summer is her favorite that she’s made.

‘It was the first narrative-style pie I created, and I was super excited with the outcome. I’m also pretty pleased with the recent snow globe-inspired pie I made for the holidays,’ she added.

Though many of her sweets are made for clients — like the sneaker-shaped cookies she’s cooked up for Louboutin — most of her pies have been made simply to expand her own skillset. That means she actually gets to dig in and enjoy them.

‘I’ve been lucky enough to eat at least a couple slices of almost every pie I’ve posted to Instagram,’ she said.

And while some people would be loath to slice a knife through such a gorgeous confection, she’s not worried once she has a picture to remember it by.

‘As long as I have photos of my dessert designs, I’m generally A-okay cutting into them, and more than happy to partake in the consumption. I create my treats to taste good as well as look cool and I really want for them to be enjoyed.’