This is not economic modelling on net zero. It’s adjacent to it.

It’s billed as “modelling”, but the analysis provided to back the government’s plan to slash greenhouse emissions can only be described as “modelling adjacent”.

The 100 pages of supporting evidence for Coalition’s Australian Way has numbers and uses plenty of economic jargon to give it the appearance of modelling. But it is clearly written to support the government’s policy rather than a full, unvarnished appraisal of the costs and benefits of reaching net zero based on the government’s chosen path. 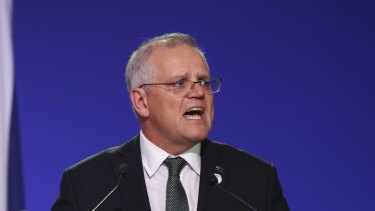 For instance, the report talks up the job opportunities on offer from transitioning the Australian economy to a net zero future.

Mining and exporting minerals like cobalt, copper, lithium, nickel, uranium and rare earths could “support up to 52,000 new jobs” in regions including southern WA, the Pilbara and South Australia.

There’s a clearly identifiable number of new jobs. But when it comes to the sector that will be most affected by a move to net zero, the modelling only tells us the value of coal will halve by 2050.

No mention of how many jobs will disappear. Admitting that would give net zero opponents, particularly those within the Coalition, too much ammunition.

Given this comes from McKinsey’s own in-house database, it will forever hide behind proprietary secrecy.

There remains no costing of climate change on the economy. Treasury hasn’t been asked to carry out this vital work since the Coalition took office.

It’s an obvious shortcoming. Why even commission a study into the cost of reducing emissions if you don’t know the cost of climate change?

You end up with this modelling that shows emissions can be cut in a slow, methodical way, every year out to 2050, without disrupting the economy. But you can only make that finding if you don’t know, or don’t want to acknowledge, the cost of climate change on the Australian economy.

The documentation also confirms what was apparent when Scott Morrison released this plan before flying off to Glasgow. Even with the plan, Australia does not reach net zero by 2050.

To make up for that shortfall there is a magic box in which future technologies – are they personal jetpacks, hoverboards or giant vacuums that suck greenhouse gases out of the air? – seemingly reside.

Future technological breakthroughs will happen. The government is not wrong to argue that point.

But a bridge that only gets you 85 per cent over a raging river is not much use.