This Morning viewers have become embroiled in a heated debate over who is responsible for attacks by dangerous dogs, in the wake of the death of a young boy.

Hosts John Barrowman and Rochelle Humes welcomed Dr Scott Miller and Ira Moss, as well as her Staffordshire bull terrier Abbey, to discuss whether dogs should be judged on ‘deed or breed’.

It comes after the death of a nine-year-old boy at the weekend, when he was bitten by a bulldog-type canine at a holiday park.

Ira and Dr Scott placed the blame for dog attacks firmly on irresponsible owners, who don’t train their pets properly.

But some viewers argued that certain breeds are just plain dangerous, with one tweeting: ‘When was the last time you saw a report of a Golden Retriever killing someone?’ 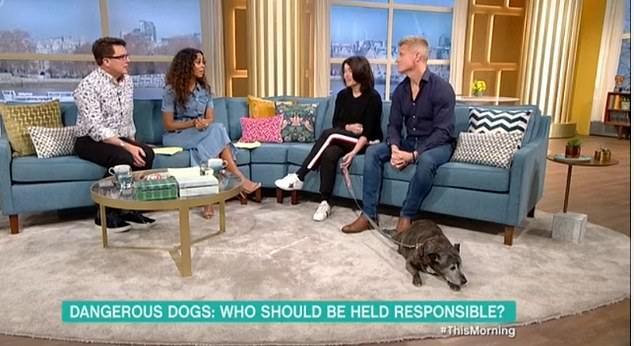 Guests Ira Moss and Dr Scott Miller were joined by Abbey, a Staffordshire dog terrier, in the studio, as they branded it the owner’s responsibility to make sure dogs are properly trained

Guest Ira Moss, who is a proud owner of a Staffordshire bull terrier, said: ‘I personally think it’s irresponsible owners, and we take hundreds of calls a week from people who no longer want their dogs.’

Placing the responsibility of the dog’s behaviour on the owner Ira, who works for rehoming charity All Dogs Matter, said: ‘Dogs need training. You can’t just get a dog and expect it to do what you want it to do.

‘If you buy a car at least there’s an MOT or something.’

She said she rehomes 300 dogs a year, and 75 per cent of them are Staffies. 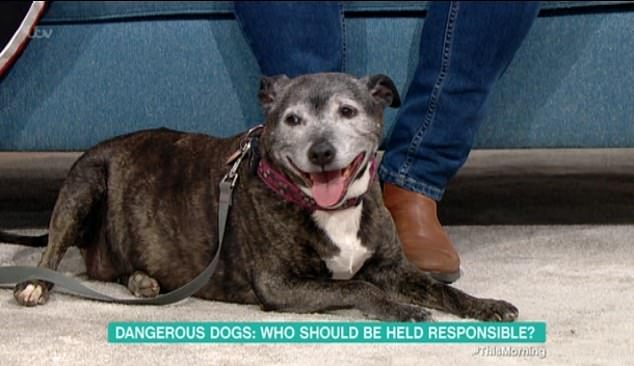 Dangerous dog or friendly family pet? Abbey appeared on This Morning, where owner Ira said it was the responsibility of the owners to train their dogs 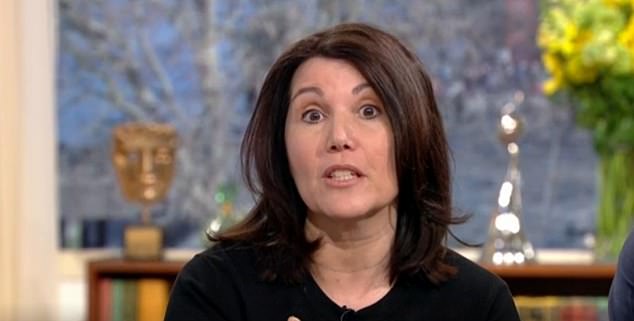 She said: ‘Any dog cans be dangerous, but the bite of a large breed, once you get to dogs that are 20kg or over, the bite is going to be more dangerous.’

She went on to say that pet owners should never leave children alone with the animals.

The debate followed the death of Frankie MacRitchi, nine, who was killed by a ‘bulldog-type breed’ while on holiday at Tencreek Holiday Park in Looe, Cornwall.

The owner of the dog, which is called Winston, has been named locally as nail technician Sadie Totterdell, 28, a friend of Frankie’s mother Tawnee Willis.

Ms Totterdell was arrested in Plymouth on suspicion of manslaughter and having a dog dangerously out of control, but was later released under investigation.

Vet Dr Scott Miller agreed that dogs should be approached carefully, and that they should never be left alone with children.

He bluntly said: ‘It doesn’t matter how nice you think your dog is. People need to focus their minds, and know that dogs can behave like weapons.’ 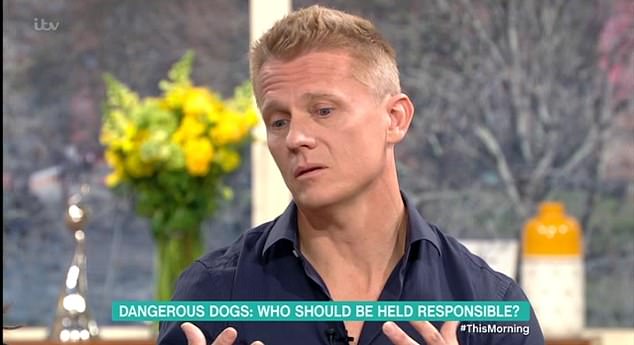 Dr Scott Miller also revealed that he would never leave his children alone with his pets, likening the animals to weapons 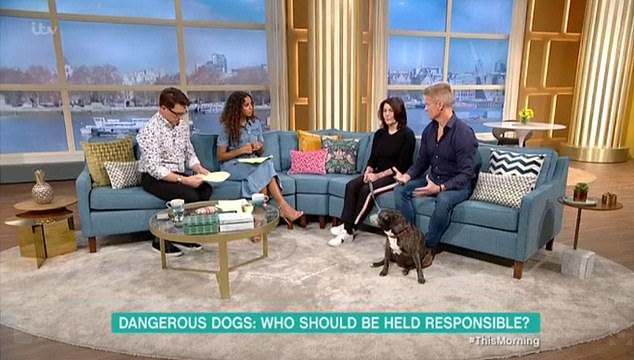 The guests called for more responsible ownership, and said that children should never be left alone with a dog

Calling both children and dogs unpredictable, he went on: ‘They’re weapons. They can hurt people. You wouldn’t leave a knife or a gun on a table and leave children in the room.’

Both guests went on to say they believed it was too easy for people to get dogs, and the lack of checks may be causing an increase in dangerous dog attacks.

‘Staffies and bully-type dogs can be the most gentle dogs in the world if trained correctly,’ one said. ‘It’s not the dog that’s dangerous, it’s the owner and how they handle it.’

Viewers debated the conversation online, with some saying that certain dogs were more aggressive, and others placing responsibility for the dog’s behaviour on the owners

One said that it was the owner’s responsibility to keep aggressive dogs under control, writing: ‘My dog has been attacked by a German Shepherd. My neighbour has an aggressive Collie.

They went on: ‘There are two reactive dogs down the street and we all live in unison with no incident – you know why? They muzzle their dogs and keep them on a lead.’

Another disagreed, saying: ‘Just waiting to see how many people start saying “It’s not the breed it’s the owner, or staffies are a lovely family pet”. Sure, not all dogs are the same but come on…’

One wrote: ‘Every dog has the potential to be a dangerous dog.’

Others said they would never leave a child alone with their dog, agreeing with This Morning guests Dr Scott and Ira that any pet could be dangerous

Others blamed the habits of parents leaving their children alone with dogs, with one writing: ‘These people need to stop leaving dogs in the same room/garden with kids alone. My dog’s lovely, and I still would never, ever leave her around my granddaughter or any other child.’

‘Any dog can attack,’ another wrote. ‘Doesn’t matter how much you trust the dog and if you feel your dog wouldn’t hurt a fly, dogs are unpredictable, it doesn’t matter what the breed.

‘My dog is basically a teddy but I still wouldn’t leave him alone with my baby girl. Common sense #ThisMorning.’

And the suggestion of whether dog owners should be licensed also divided viewers.

One wrote that owners would simply lie about the history of the dog to make it easier to sell online, saying: ‘I’m sorry lady, but this isn’t a thing. Most, if not all adoption centers, are vigorous in who they give their dogs out to. Owners lie – we both know they do. And also it’s buying dogs that’s part of the problem.’

Another was saddened by the thought of having to buy a license, arguing that it would price some people out of being a dog owner.

Some debated whether it was appropriate for dog owners to have a license, with some saying that it wouldn’t be a solution, and others saying it would ‘out price’ poorer pet owners