Boy, three, who was diagnosed with a rare neurological condition which affects just one in a BILLION, is able to walk for the first time after his parents raised £16k for a ‘life-changing’ machine

A three-year-old boy with a one in a billion condition was able to walk for the first time after his parents raised £16,000 for a ‘life-changing’ movement machine.

Oliver Hardwell, from Bristol, was diagnosed with an incredibly rare strain of Pontocerebellar Hypoplasia called Encephalopathy Fatal Infantile in December 2018.

The neurological disorder results in the wasting away of parts of the brain which affect movement, balance and speech – and there are only six reported cases worldwide.

Rare as the condition is, Oliver is an even more special case as he has a genetic variation that means his case is completely unique. 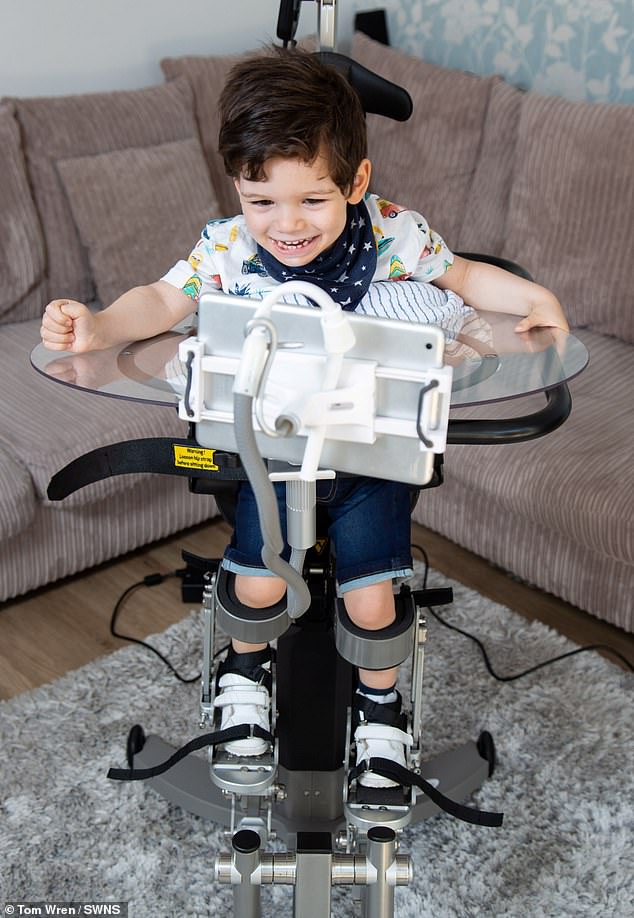 Oliver Hardwell, three from Bristol, who has a one-in-a-billion condition, was able to walk for the first time after his parents raised £16,000 for a ‘life-changing’ movement machine (Pictured: Oliver with his Innowalk) 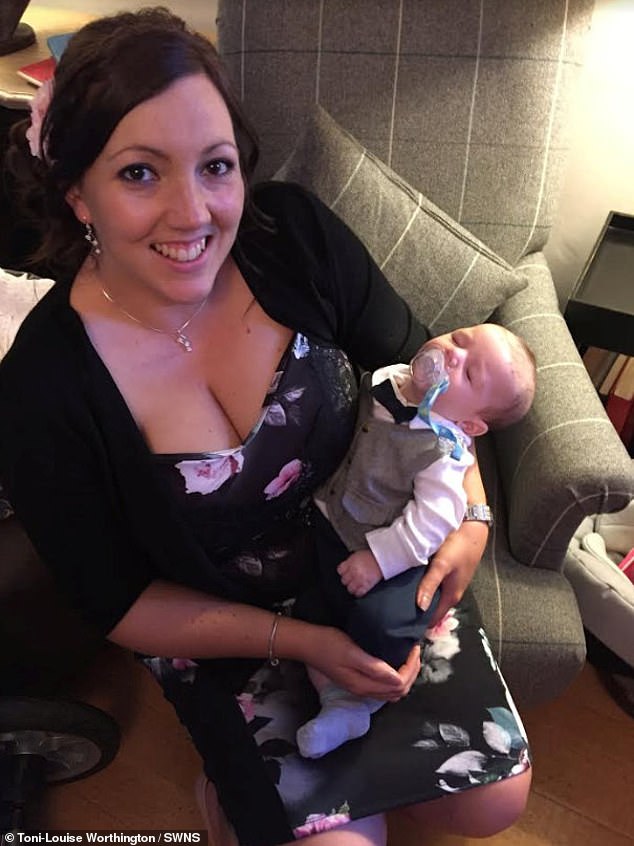 Although doctors don’t yet know what the variation means, it seems to be positive for Oliver as he lacks many of the typical symptoms of PCH – such as suffering from devastating seizures.

His development, however, is affected and while other children his age are running around carefree, Oliver has just learnt to sit up with minimal support.

But with the help of a revolutionary machine called an Innowalk, he has been able to mimic the action of walking, pushing up from his feet and using the muscles in his legs for the first time.

Now, after parents Toni-Louise Worthington, 35, and Stephen Hardwell, 35, started a fundraising page in May and raised £16,000, Oliver has his very own Innowalk to have at home and keep him walking.

The machine has been described as ‘life-changing’ by Toni-Louise, as it will help prevent hip dislocation and can create muscle memory, strengthening not just Oliver’s legs but his confidence too.

‘My son is one in a billion – and with this variant too it means there is no-one else like him,’ explained Toni-Louise. ‘We always knew he was special but not this much!

‘We don’t know what the future holds for Oliver so we make the most of every day. He has to work so much harder for everything, but he is the happiest little boy.

‘It’s been an absolutely incredible journey, such a rollercoaster, but I wouldn’t change it for the world. He’s such a trooper – we call him our “neuro hero” – so to see him walk for the first time felt indescribable.’ 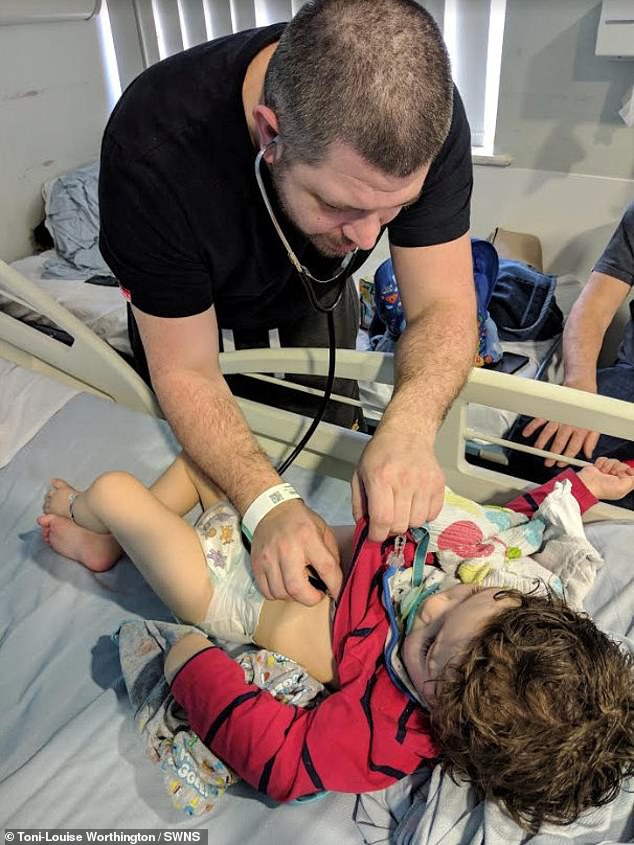 Rare as the condition is, Oliver is an even more special case as he has a genetic variation that means his case is completely unique (Pictured in hospital with his father Stephen Hardwell)

Oliver was born in July 2016 but it wasn’t until he was four months old that his parents began to suspect something was wrong.

‘I’d go to a baby group and see the other children lifting their heads up and looking round, which Oliver just wasn’t doing,’ his mother explained.

‘Whenever I mentioned it, people would brush it off and just say he was a little bit delayed, but the gap between Oliver and his peers seemed to get wider and wider.

‘I tried not to worry and doctors said to wait until he was one, but I had a gut instinct that something wasn’t right.

‘At his one-year health visit in August 2017, it was finally acknowledged that something was wrong. Oliver couldn’t sit or roll, and his paediatrician immediately knew it was something neurological.’

An MRI scan in January 2018 at Bristol Royal Hospital for Children found the cerebellum part of Oliver’s brain showed signs of damage and potentially even loss on one side. 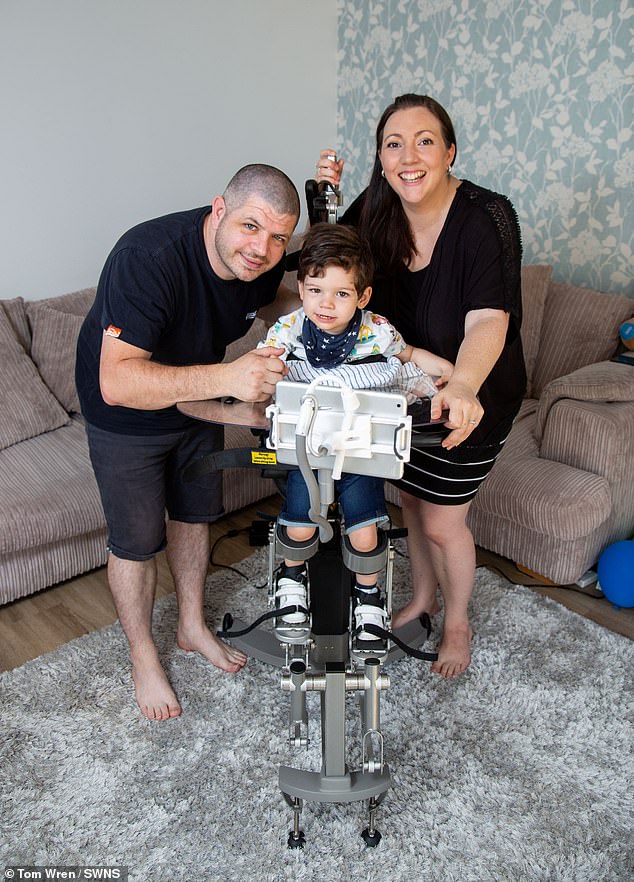 With the help of a revolutionary machine called an Innowalk (pictured), Oliver has been able to mimic the action of walking, pushing up from his feet and using the muscles in his legs for the first time (Pictured: Oliver, Stephen and Toni-Louise) 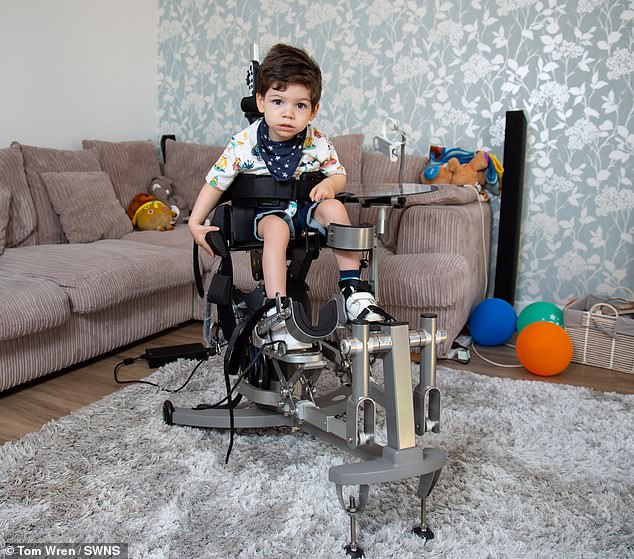 But doctors couldn’t give a definitive diagnosis until they knew whether or not Oliver was deteriorating.

Toni-Louise, who was a civil servant before becoming her son’s full-time carer, said: ‘I was shocked because Oliver has never gone backwards. It may take him a lot more time and effort than other children, but he has always been progressing.

‘It didn’t seem possible that his brain was wasting away, and another MRI six months later showed no signs of degeneration, which was a huge relief.’

Doctors told Toni-Louise and Stephen that they were amazed Oliver was still alive because children born with PCH type six rarely survived past infancy.

Oliver, however, seemed the picture of health and was consistently hitting new milestones like sitting up independently. 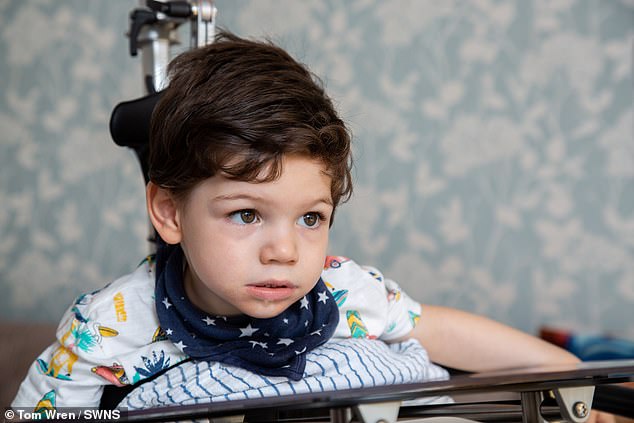 Oliver has been using his Innowalk five times a week for 15 minutes at a time since its arrival, with a view to building up to one hour daily

It was also apparent that Oliver had a unique genetic variation which could be the reason he didn’t have many of the typical symptoms.

‘Because the cerebellum is responsible for motor skills, movement and balance, when Oliver wants to lift up his arm or leg he has to manually tell parts of his body to do it,’ explained his mother.

‘Nothing is automatic for him, so it makes it so much harder. Then sometimes the message from his brain doesn’t quite translate and he isn’t able to do it – it must be really frustrating for him.

She added: ‘Normally by the age of one you can sit independently, but for Oliver that’s something we’ve recently gotten to grips with.

‘It shows how much harder it is and how much longer it takes for him, but the point is – he is progressing. 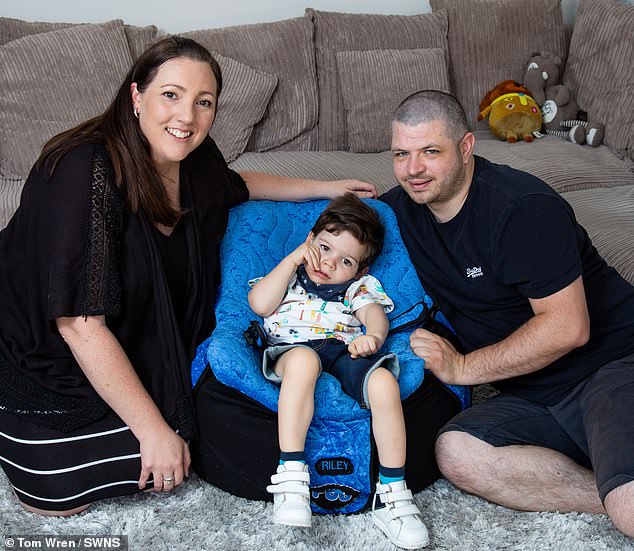 ‘Even if they are slow steps, they are always going in the right direction. We celebrate every single milestone in a big way because it means so much to us all.’

Oliver has physiotherapy several times a week and also attends Gympanzees – a pop-up activity centre for children of all abilities in Bristol.

There, he was able to use an Innowalk, a motorised device that allows for sitting, standing and moving.

Use of the machine can lower the risk of hip dislocation, which children like Oliver who can’t readily move are at risk of, and helps him with his muscles and core strength.

‘His second session in April he went on the Innowalk. It was amazing – I was so emotional to see him moving that way,’ said Toni-Louise.

‘We’ve been to all of these appointments over the years and it’s always so negative. I understand doctors just want to be realistic, but Oliver is such a happy and determined boy. 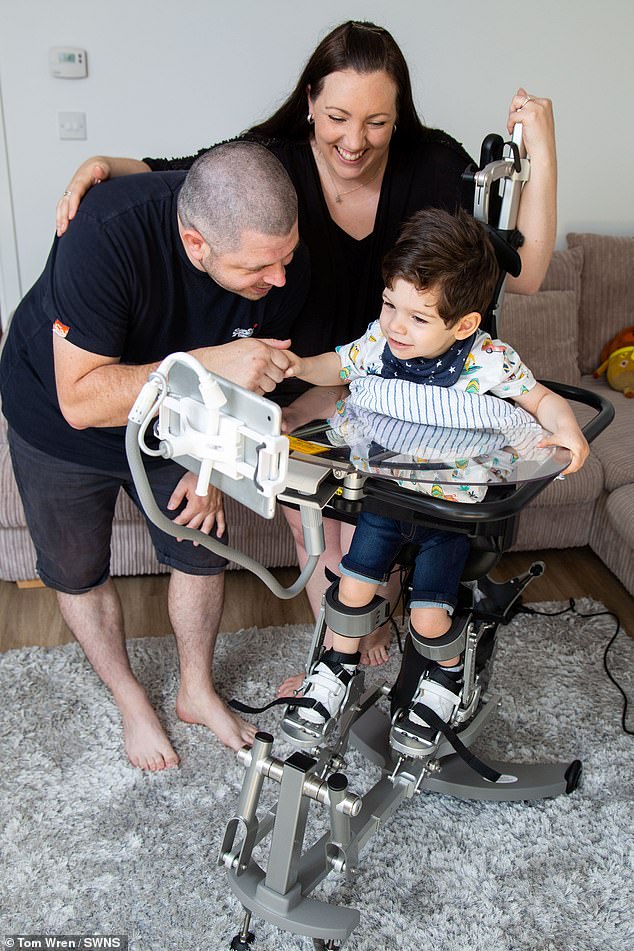 ‘We don’t really know what the future holds for Oliver or what each day will bring, and that can be hard,’ Toni-Louise said (Pictured: Toni Louise, Stephen and Oliver)

‘To see him walk 500 metres on his first try was mind-blowing – we were all shocked! But him having that will inside means he’ll go far.

‘He may never walk himself but he’ll do his damnedest to get as close as he can – and this machine was incredible for that.’

The family decided to start fundraising to help raise the money to pay for Oliver to have his own Innowalk so he could continue to progress at home.

Toni-Louise said: ‘We thought it would take months and months of me standing at a Tesco checkout trying to raise the money, but we were stunned by how quickly we hit our target.

These conditions vary, but are largely associated with delayed or absent milestones.

There are various strands of the condition, but common symptoms include:

‘It’s incredible to see how people have come together to help us and we really can’t get over the generosity.

‘We had even planned a big fun day – which we still did, as a thank you – but the Innowalk was already on it’s way to us by then.’

Oliver’s Innowalk was delivered on July 15, much to his parents delight.

‘He already had a standing frame but he can’t move that way, and that means he can’t create muscle memory and leg strength, let alone the actual confidence to walk,’ she said.

‘Oliver is absolutely loving the Innowalk – if he’s laying on the floor near it he wants to move towards it and touch it.

‘He’s constantly smiling when he’s in it. I think he really enjoys that freedom of being upright and independent.

‘It feels surreal every time we look at it. We worked so hard to help him and it’s amazing to see the results. It gives us huge hope in the face of adversity that Oliver will get there.’

Oliver has been using the Innowalk five times a week for 15 minutes at a time since its arrival, with a view to building up to one hour daily.

‘We don’t really know what the future holds for Oliver or what each day will bring, and that can be hard,’ Toni-Louise said.

‘But when you love someone so much, you do what you have to do. I’m a great believer in positive thinking, and this is something we make a point of doing. We don’t sweat the small stuff and we make the most out of everything.

‘Small milestones become huge celebrations and everything is just that bit more special. I think that’s the case for most parents of children with disabilities.

‘I’m grateful for this journey. It’s given me a purpose and I know my mission in life is to show everyone that he is a normal little boy. I’m the luckiest mum alive.’