THE UK economy dropped by 2.2 per cent in the first three months of the year in the joint-largest fall since 1979, the Office for National Statistics (ONS) has said.

It fell by 0.1 per cent more than had been predicted, but the ONS said that the data changed after the economy plunged by a record 6.9 per cent in March.

It's also down 1.7 per cent compared to the same three months last year.

The latest figures show the first direct effects of the coronavirus pandemic but not the full impact of lockdown.

Data for the second quarter of the year is expected to be worse, after the economy shrank by a record 20.4 per cent in April.

It comes as the Prime Minister is expected to make a major speech today on the economy. 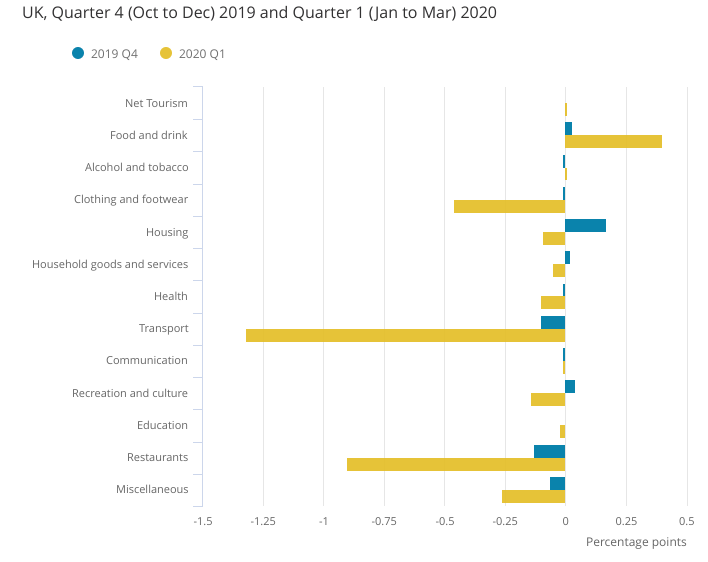 What does a falling GDP mean for me?

GROSS domestic product (GDP) is one of the main indicators used to measure the performance of a country's economy.

The economy is in recession when it has two consecutive quarters (ie six months) of negative growth.

Following the global financial crisis that started in 2007, UK GDP fell by 6 per cent.

This marked the deepest recession for 80 years.

The Bank of England (BoE) uses GDP as one of the key indicators when it sets the base interest rate.

This decides how much it will charge banks to lend them money, and is a way to try to control inflation and the economy.

So, for example, if prices are rising too fast, the BoE could increase that rate to try to slow the economy down. But it might hold off if GDP growth is slow.

The BoE cut interest rates twice in March due to coronavirus.

Base rate cuts means mortgage borrowers now typically benefit from lower rates, but at the other end of the scale savers earn less on their savings.

Andrew Wishart, UK economist at Capital Economics, told The Sun the full impact of the crisis on jobs and businesses will only become apparent once the government starts to withdraw its support.

The research firm expects unemployment to double from 4 per cent to 8 per cent, with the same number of companies likely to go bust.

Jeremy Thomson Cook, chief economist at Equals, added: "The falls in GDP are both a sign of what has happened and a signal of what is to come for consumers.

”The former is obvious; Brits aren’t shopping as much due to the fact that most shops were closed in April.

"The signal for the future is that consumption may rebound sharply as things open up, but we expect people to save more of their wages moving forward, cutting consumption in the longer term."

Household spending was down by 2.9 per cent between January and March this year, down by 1.2 per cent from what experts had estimated.

It's the worst decline in household spending since the Winter of Discontent in 1979, when there were widespread trade union strikes which brought on a recession in the early 1980s.

Jonathan Athow, deputy national statistician at the ONS, said: "Our more detailed picture of the economy in the first quarter showed GDP shrank a little more than first estimated – this is now the largest quarterly fall since 1979.

"All main sectors of the economy shrank significantly in March as the effects of the pandemic hit.

"The sharp fall in consumer spending at the end of March led to a notable increase in households' savings."