UK’s first Muslim Pride festival will be held in London this year after LGBTQI charity raised £10, 000 in crowdfunding campaign – and they insist ‘Islamophobia won’t stop them’

The UK’s first Muslim Pride festival will be held in London this year as Europe’s leading LGBTQI Muslim charity celebrates their 20th anniversary.

The event, organised by charity Imaan, will take place on Saturday April 11, and tickets for the soon-to-be announced venue will go on sale in two weeks.

The event comes after the organisation successfully raised £10,563 and garnered 467 supporters in 42 days last year. 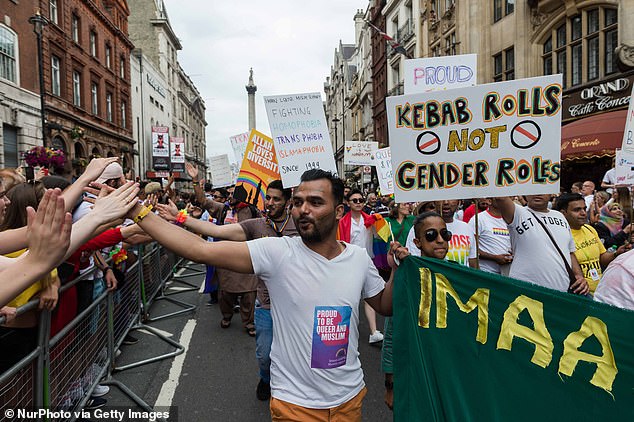 The UK’s first Muslim Pride festival will be held in London this year as Europe’s biggest charity supporting LGBTQI Muslims, Imaan,  celebrate their 20th anniversary. Pictured, members of Imaan at London Pride in 2019

However, despite making the announcement just two days ago, the charity has already been hit with a slew of negative tweets from online trolls.

After received a series of Islamophobic comments, the organisation insisted they wouldn’t let abuse stop them from holding the event, and posted the hashtag: ‘Islamophobia won’t stop us’.

In response, others took to social media to praise the event, with one hailing the forthcoming parade ‘absolutely incredible’.

‘Fantastic news – well done to all involved in getting it off the ground,’ commented one, while a second enthused: ‘Gosh, well done guys! I wish you all the luck in the world.’

‘I wish I could make it, I am very far away but I will definitely try because this sounds epic.’

A third praised: ‘This is absolutely incredible. Huge congratulations! Sending all our love and support to you all!’ 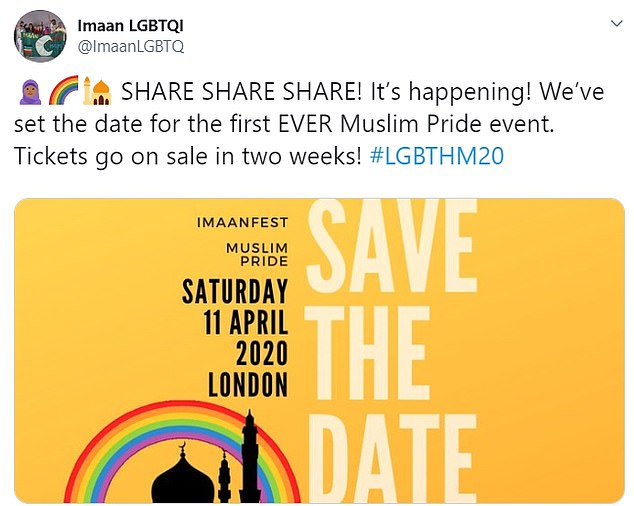 The event organised by Imaan LGBTQI, will take place on Saturday April 11, and tickets for the soon-to-be announced venue will go on sale in two weeks (pictured)

The organisation shared a series of Islamophobic comments they received, before insisting they wouldn’t let abuse stop them from putting on the event

Imaan was founded in London in November 1999 by lesbian, gay, bisexual and trans Muslims, and this year will mark the the charity’s 20th year in operation.

The group has put out calls for queer Arab speakers, as well as well-being practitioners and service providers who are interested in taking part in discussions.

And so the event will ‘build on the incredible events we organised in the past and feature panels, discussions, speakers, arts, culture and history and will be a ‘first for LGBTQI Muslims.’

A project lead at Imaan, Rose, previously told how the event will ‘open up the conversation’ for LGBT Mulsims to speak about their sexuality.

‘This is going to help the next generation to know it’s okay for them to be LGBT and also be Muslim,’ she said, speaking to the Evening Standard. ‘When people talk about Muslims they don’t really talk about sexuality – this will open up the conversation.’

Despite the negative comments, many took to Twitter to praise the event and hailed the forthcoming parade ‘absolutely incredible’

Julia Louis-Dreyfus on ‘Veep,’ ‘Seinfeld’ and why Republicans have ‘lost their minds’
Celebrities Posts