The Minister for Veterans, Local Government and Suburban Development on Tuesday revealed he had been receiving treatment for the past month and said his prognosis for recovery was good. 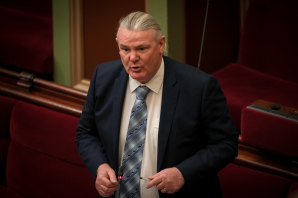 “Over the past month, I’ve been receiving radiation therapy across my shoulders and chest to treat a number of skin cancers,” Mr Leane said in a statement.

“My prognosis for recovery is very good, but I’ve reached a point in recent days where I’m struggling with the physical effects of the treatment – such as fatigue and pain.”

He said the treatment was compromising his responsibilities to the government, constituents in the Eastern Metropolitan electorate and ministry stakeholders.

“I will be taking leave for the next four weeks, which – all going well – coincides with the end of my treatment period.”

In his absence, Luke Donnellan, the Minister for Child Protection, Disability, Ageing and Carers, will be acting Minister for Veterans.