Viewers are left ‘disturbed’ by parents training their son, 3, like a dog by using a clicker device – and say it’s the adults who need of ‘help’

Viewers were left ‘disturbed’ last night after watching Channel 4’s controversial new programme Train Your Baby like A Dog, with many branding it ‘heartbreaking’ to watch.

Jo-Rosie slammed ‘traditional’ parenting methods, such as employing a ‘naughty step’, and used animal training instead, such as a ‘clicker’ to reinforce positive behaviour in the child.

Many of those watching were left shocked by the programme, with some calling it ‘disturbing’ to watch. 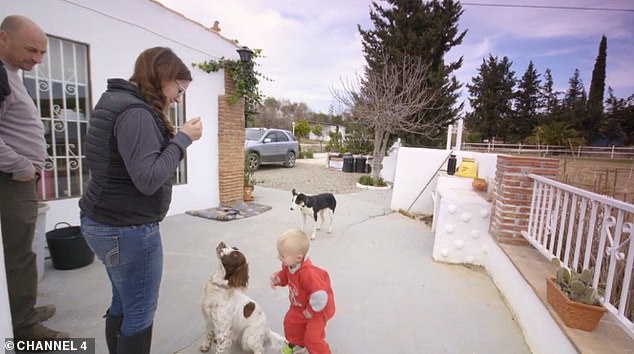 Viewers were horrified by the programme, with many taking to Twitter with their shock. One branded it ‘disturbing to watch’

One wrote: ‘We don’t believe in testing/experimenting on animals so why have we  recorded and televised this test/experiment on children? It’s actually heartbreaking to watch. #trainyourbabylikeadog #cuddlesnotclicks.’

Another commented: ‘He’s gone from tantrums to absolute silence’ says it all. Poor child. All he wanted was some attention. It’s the parents who need help not the child. Disturbing to watch. Trainer didn’t once kiss and cuddle her own child #trainyourbabylikeadog.

Before the programme aired, a petition to axe the show received 25,000 signatures after the practice was associated with historical techniques used on autistic people.

And on the show, Jo-Rosie repeatedly compared a child’s behavior to that of a dog, and was even seen telling her own son Santino to ‘sit’ alongside her pets. 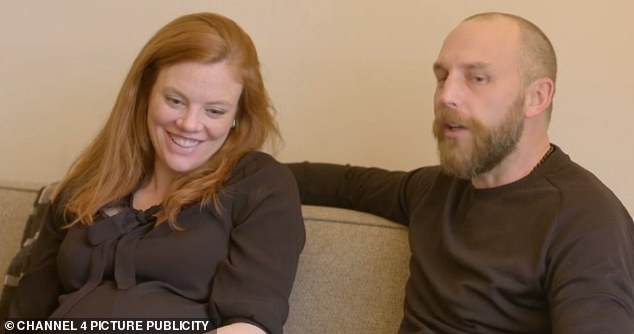 Parents Jo and Garrett, from Bristol, employed the help of Jo-Rosie to assist with their naughty son Greydon

At home in Spain, Jo-Rosie’s world was an oasis of canine calm and obedience, and she insisted the techniques worked on her own son.

She used motivational methods to train all seven of her dogs, saying: ‘Instead of thinking all the time about what we don’t want the animal to do, we focus on what we do want them to do.’

Jo-Rosie explained: ‘We tried to use the traditional parenting stuff because that what you do, but it didn’t make any sense.

‘Like letting the animal get distressed and I think then it really hit home – I have something better.’ 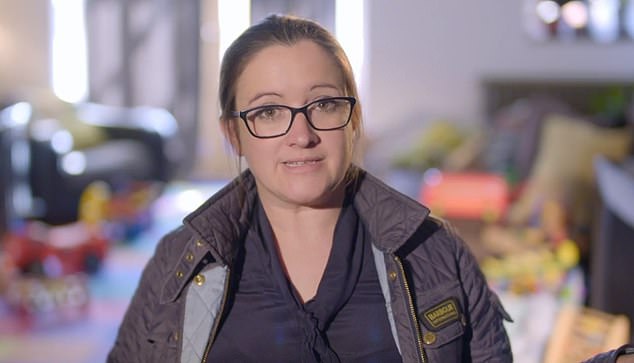 She insisted it was ‘kinder and more effective’ than parenting methods used by most people.

Meanwhile in Bristol, client Jo, who was heavily pregnant with her second child, revealed her son Greydon’s tantrums had gotten out of control.

The mother-of-one said she was concerned about bringing a new baby into the environment, but revealed her friends were stunned when she said she should bring in a dog trainer to help control her son. 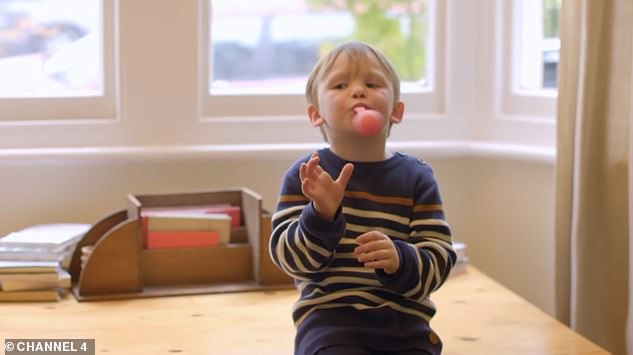 The naughty three-year-old Greydon was trained by Jo-Rosie’s techniques, which include using a dog clicker and food as positive reinforcement for behaviour 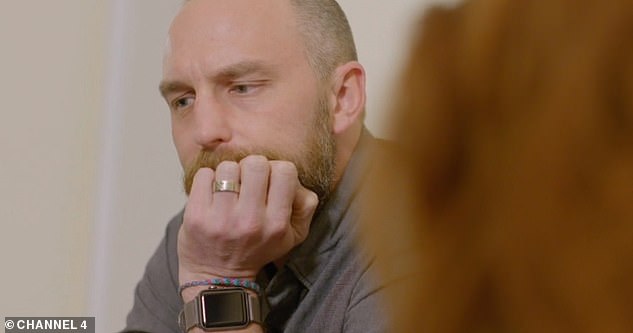 Jo-Rosie insisted: ‘If everybody parented their child in the same way we train our dogs, we’d end up with much more confident, compassionate human beings. but it also helped  them to learn how to behave.’

After an observational period, Jo-Rosie told Jo and Garrett that their first task was to recognise the signs that Greydon is having a tantrum.

She explained: ‘Just like dogs, learning these key body languages in your children can be really really useful, like a crystal ball that will allow you to see what is about to happen, before it happens.’

When Jo and Garrett watched a video clip of them responding to their son’s tantrum, the couple were stunned, saying: ‘I felt like we had failed him a little bit.’ 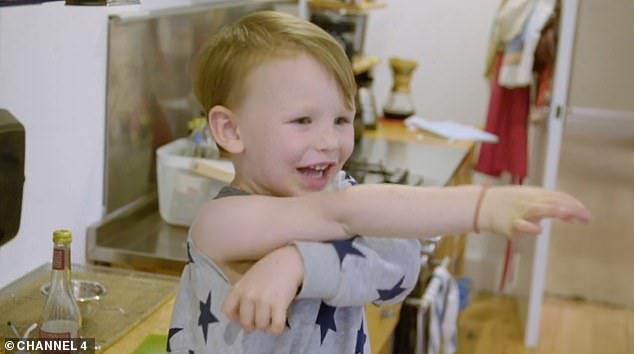 Over the next week, the couple learned to read the early signs of a tantrum and changing his environment when they saw it coming.

Jo-Rosie then introduced a ‘clicker’ to reinforce positive behaviour in Greydon, and would ‘click’ the device every time he did something right.

She explained: ‘I’m going to use a clicker. The idea is as soon as he hears that, he knows the minute he does then that is what he should be doing.’

Using the concept of reinforcement, Jo-Rosie trained her dogs with the clicker and she insisted it would work with children in the same way, demonstrating when and where to use the clicker.

Psychotherapist slammed idea that parents should train children like dogs

A psychotherapist has slammed the idea that parents should train their children like dogs and feels it could lead to harmful relationships later on in life.

Philippa Perry, 61, who wrote best-selling parenting book ‘The Book You Wish Your Parents Had Read’ appeared on Lorraine where she criticized animal behaviour expert, Jo-Rosie Haffenden for saying parents should train their children like dogs.

Haffenden claimed in her controversial documentary ‘Train Your Baby Like a Dog’ that the clicker method, which involves pacing out rewards for animals using clicks activated by a button, could be used effectively to encourage good parenting.

However, the London-based author thinks ‘manipulating’ your children could teach them negative behaviors which could have a detrimental effect on them and their relationships in later life.

She said:  ‘It is manipulation and I don’t want to be manipulated by people and I don’t think babies are very different.

‘It’s much better if we relate to children as people.

‘The trouble with manipulating is they learn to manipulate and then they don’t have such great relationships in life.’ 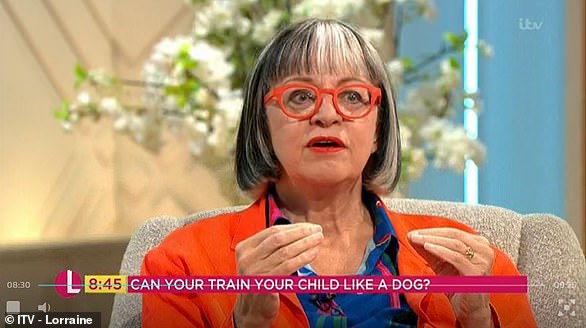 Psychotherapist Philippa Perry, 61, feels using the controversial clicker method on children,which involves pacing out rewards for animals using clicks activated by a button, could cause them harm in later life

The parenting expert went on to explain that the best way to deal with badly behaved children is to try and relate to them, rather than treating them like an ‘it’ who can be trained. 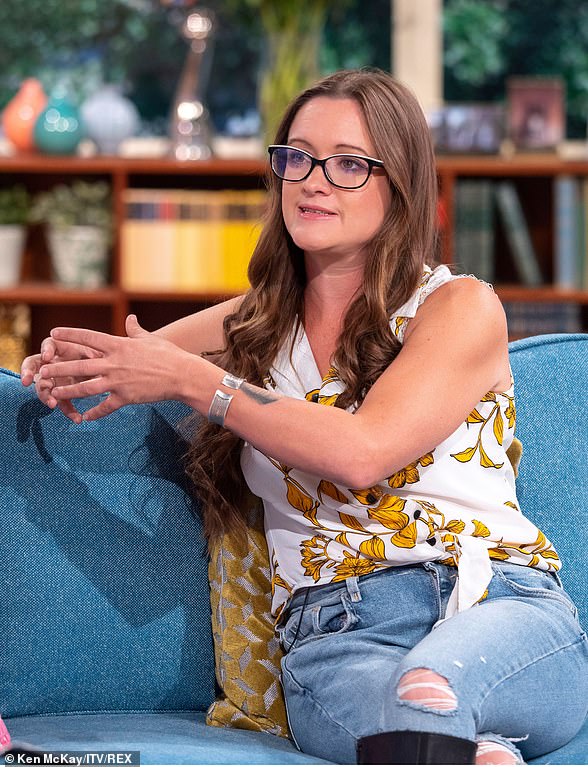 She said:  ‘I think when I was growing up it was more usual to think in terms of training children rather than relating to children.

‘You’d often feel like an ‘it’ rather than a person.’

Reflecting on her book, which explores ‘influential relationships are between parents and children’ the writer went on to explain that parenting should be based on mutual ‘respect’ and not about ‘manipulating’ your child.

She said: ‘There wasn’t a book about the relationships we have with our children.

‘There was more books about manipulating children to do what you want.

‘But this is a life long relationship that should be built on respect… and this is about how to have the best relationship with your child.’

Giving advice on how to deal with children having tantrums, Philippa insisted she feels ‘sorry’ for both parent and child, and urged parents against ‘abandoning’ their child during their episode. 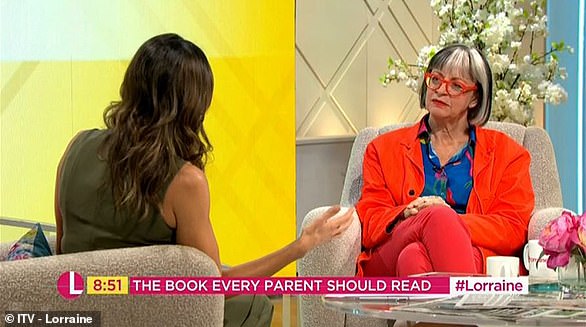 She said: ‘I feel sorry for both of them because children when they’re that young are not choosing to have tantrums they’re overstimulated, they can’t manage.

‘A child doesn’t want to be abandoned in their misery,  they want you to be there with them so they don’t feel deserted.

‘Because then they have two things to be upset about.’

She said: ‘Teaching them what is right is much more important than telling them off when they get it wrong.’

She also told how a similar ‘positive reinforcement’ technique with food could be used.

After deploying the various techniques that Jo-Rosie shared with them, Jo and Garrett were left stunned to see their son Greydon going from rage frustration and violence, to absolute silence. 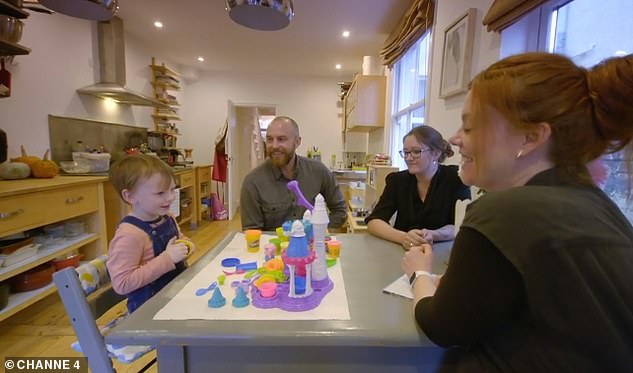 But the programme struck a nerve with viewers, who said they’d been left ‘disturbed’ by the ‘parenting’ pet training methods.

One wrote: ‘Watching #trainyourbabylikeadog and I’m curious how their relationship to food will develop as they get older. Viewing food as a ‘treat’ and ‘reward’ could surely lead to emotional eating.’

Another wrote: ‘Our young children need secure attachments, adults to co-regulate with them, positive interactions, empathy, compassion and nurture. 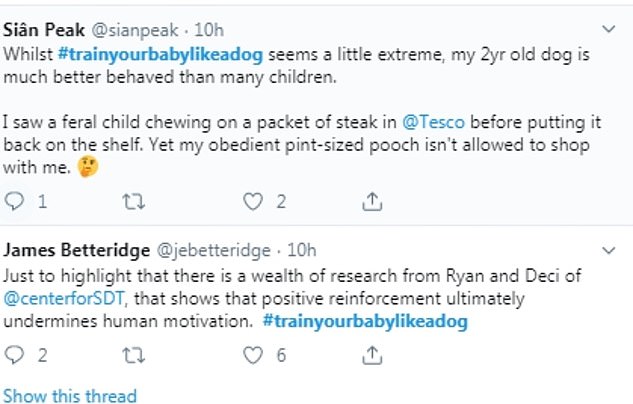 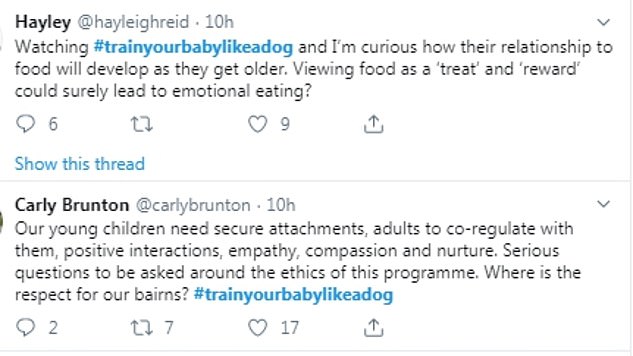 Viewers took to Twitter to slam the programme, with one questioning the ethics of the Channel 4 show

‘Serious questions to be asked around the ethics of this programme. Where is the respect for our bairns?’

One added: ‘This was one of my main concerns – the emphasis was on control, conditioning and compliance instead of discourse, respect and human interaction.

‘We know that language development is fostered by conversational turn-taking, where was that encouraged?’