VJ Day, or Victory over Japan Day, marks the day Japan surrendered at the end of World War II. While VE Day marked the end of the war in Europe in May 1945, many thousands of Armed Forces personnel were still involved in bitter fighting in the Far East.

An estimated 71,000 soldiers from Britain and the Commonwealth died in the war against Japan, including more than 12,000 prisoners of war who died in Japanese captivity.

A nationwide moment of silence will take place at 11am on August 15.

The Red Arrows will also take to the skies in a UK-wide flypast.

The Duke of Cambridge will feature in ‘VJ Day 75: The Nation’s Tribute,’ a special programme filmed at Horse Guards Parade that will be broadcast on BBC One. 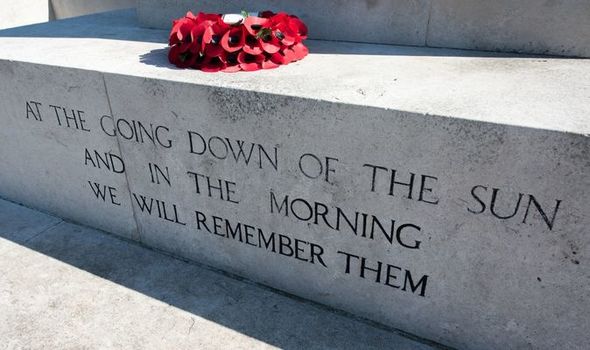 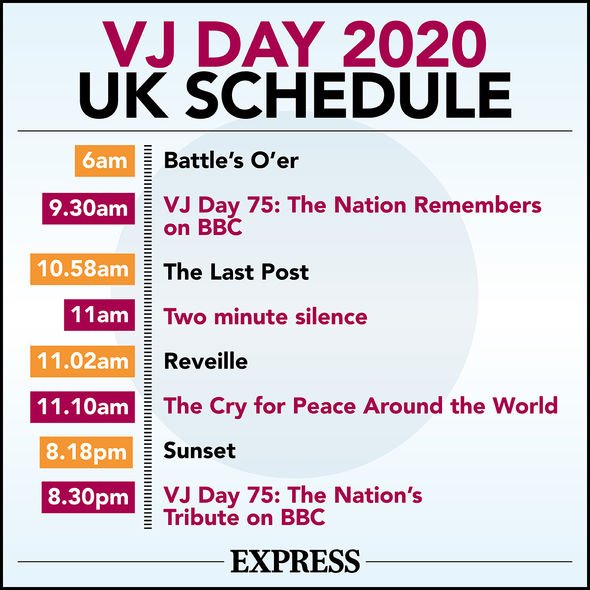 Prime Minister Boris Johnson said: “When the Second World War ended 75 years ago with the surrender of Japan, British soldiers, sailors and airmen were serving in the Far East, fighting hard to achieve victory – and were among the last to come home.

“On this anniversary I want to remember what we owe the veterans of the Far East campaign. They brought an end to the Second World War, they changed the course of history for the better, liberated South East Asia, and many paid the ultimate sacrifice.”

Usually, the day would be marked by a ceremony led hundreds of VJ veterans in London.

But due to coronavirus, this will not be the case this year. 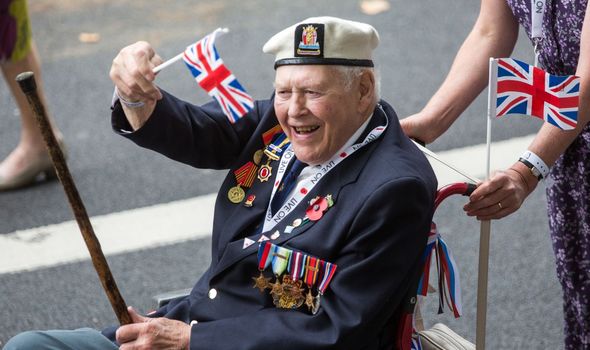 During his victory speech, King George VI said: “The war is over. You know, I think, that those four words have for the Queen and myself the same significance, simple yet immense, that they have for you.

“Our hearts are full to overflowing, as are your own. Yet there is not one of us who has experienced this terrible war who does not realise that we shall feel its inevitable consequences long after we have all forgotten our rejoicings of today.”

At midnight, the British Prime Minister Clement Atlee confirmed the news in a broadcast saying, “The last of our enemies is laid low.”

To crowds gathered outside the White House, President Truman said: “This is the day we have been waiting for since Pearl Harbor.”

On the 70th anniversary of VJ Day, the Japanese Emperor Akihito expressed remorse for the tragedies that took place in the

He said: “Reflecting on our past and bearing in mind the feelings of deep remorse over the last war, I earnestly hope that the ravages of war will never be repeated.”

Gladys Wilkins, a Women’s Royal Naval Service radio operator, said at the 70th anniversary event: “We’d meet the POW ships coming back to Columbo and take the men for a coffee, just to try and make them feel normal again. 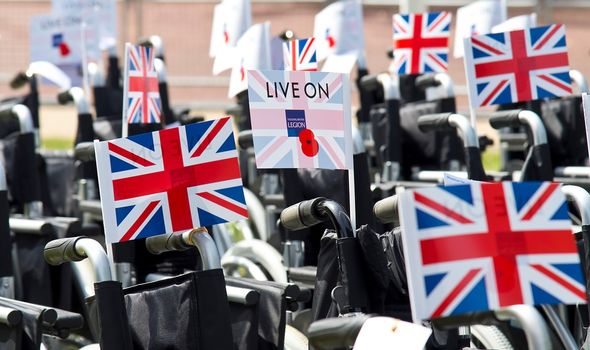 “Seeing them come down the gangway in the state they were in was terrible. I shall never forget that.”

She added: “I’m very proud of what my husband did, but I’m also proud of all the people who never came back.”

Excerpts from British newspapers at the time document the reaction at home, when widespread celebrations took place.

The Birmingham Gazette described some of the scenes: “Youngsters were perched precariously in the branches of the trees in St Phillips Churchyard and occupied most of the window-ledges along the street, people of all ages – even elderly women were standing shoulder to shoulder on the flat roofs of the street air raid shelters; young men, girls and children even contrived to retain a vantage point on the top of the scanty bus shelters at the stopping places.”

The Road to Mandalay by Rudyard Kipling was a favourite marching tune for many in the 14th Army in Burma, commanded by Field Marshal Lord Slim during the campaign. It reads:

By the old Moulmein Pagoda, lookin’ lazy at the sea,
There’s a Burma girl a-settin’, and I know she thinks o’ me;
For the wind is in the palm-trees, and the temple-bells they say:
“Come you back, you British soldier; come you back to Mandalay! “
Come you back to Mandalay,
Where the old Flotilla lay:
Can’t you ‘ear their paddles chunkin’ from Rangoon to Mandalay ?
On the road to Mandalay,
Where the flyin’-fishes play,
An’ the dawn comes up like thunder outer China ‘crost the Bay!
‘Er petticoat was yaller an’ ‘er little cap was green,
An’ ‘er name was Supi-yaw-lat – jes’ the same as Theebaw’s Queen,
An’ I seed her first a-smokin’ of a whackin’ white cheroot,
An’ a-wastin’ Christian kisses on an ‘eathen idol’s foot:
Bloomin’ idol made o’ mud
Wot they called the Great Gawd Budd
Plucky lot she cared for idols when I kissed ‘er where she stud!
On the road to Mandalay…

When the mist was on the rice-fields an’ the sun was droppin’ slow,
She’d git ‘er little banjo an’ she’d sing “Kulla-lo-lo!
With ‘er arm upon my shoulder an’ ‘er cheek agin my cheek
We useter watch the steamers an’ the hathis pilin’ teak.
Elephints a-pilin’ teak
In the sludgy, squdgy creek,
Where the silence ‘ung that ‘eavy you was ‘arf afraid to speak!
On the road to Mandalay…

But that’s all shove be’ind me – long ago an’ fur away
An’ there ain’t no ‘busses runnin’ from the Bank to Mandalay;
An’ I’m learnin’ ‘ere in London what the ten-year soldier tells:
“If you’ve ‘eard the East a-callin’, you won’t never ‘eed naught else.”
No! you won’t ‘eed nothin’ else
But them spicy garlic smells,
An’ the sunshine an’ the palm-trees an’ the tinkly temple-bells;
On the road to Mandalay…

I am sick o’ wastin’ leather on these gritty pavin’-stones,
An’ the blasted English drizzle wakes the fever in my bones;
Tho’ I walks with fifty ‘ousemaids outer Chelsea to the Strand,
An’ they talks a lot o’ lovin’, but wot do they understand?
Beefy face an’ grubby ‘and –
Law! wot do they understand?
I’ve a neater, sweeter maiden in a cleaner, greener land!
On the road to Mandalay…

Ship me somewheres east of Suez, where the best is like the worst,
Where there aren’t no Ten Commandments an’ a man can raise a thirst;
For the temple-bells are callin’, an’ it’s there that I would be
By the old Moulmein Pagoda, looking lazy at the sea;
On the road to Mandalay,
Where the old Flotilla lay,
With our sick beneath the awnings when we went to Mandalay!
O the road to Mandalay,
Where the flyin’-fishes play,
An’ the dawn comes up like thunder outer China ‘crost the Bay !