Voters back Labor premiers over Berejiklian and PM on outbreak response

Labor premiers hold a clear lead over Prime Minister Scott Morrison in support from voters on the response to recent outbreaks, highlighting the power of the states in a national cabinet debate on lockdowns.

Victorian Premier Daniel Andrews is backed by 52 per cent of voters nationwide and Queensland Premier Annastacia Palaszczuk is backed by 51 per cent when Australians are asked about the way major leaders have responded to outbreaks in recent weeks. 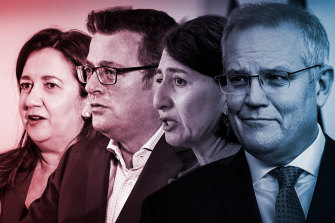 Voters are backing the Labor premiers’ handling of the pandemic response in recent outbreaks over the NSW Premier and the Prime Minister.Credit:

That compares to only 26 per cent of respondents saying NSW Liberal Premier Gladys Berejiklian responded well or very well to the outbreaks, while 38 per cent said the same for Mr Morrison.

The findings are part of a new survey that reveals strong concerns nationwide with Ms Berejiklian’s handling of the NSW outbreak, with 39 per cent saying her restrictions were too light and 40 per cent saying the recent lockdown measures are enough but should have come sooner.

Mr Morrison is scheduled to chair the next national cabinet meeting with state and territory leaders at 2pm on Friday with the agenda including the vaccine rollout and the plan to ease restrictions in stages when vaccinations reach 70 and 80 per cent of people aged 16 and over.

The agenda also includes proposals on benefits for vaccinated Australians under a discussion led by Victoria, Tasmania and the Northern Territory on how to ease rules for some while keeping them in place for those who do not get inoculated.

The meeting will also receive a medical update after federal Health Department officials briefed the federal government on Thursday on findings that the current outbreak had a higher hospitalisation rate but fewer deaths compared to Victoria’s outbreak last year.

The Resolve Political Monitor surveyed 1,607 people during the period from August 17 to 21, producing results with a margin of error of 2.5 per cent and showing majority support for the national plan to ease restrictions.

The question to voters nationwide was: “In recent weeks there have been COVID outbreaks in several states. How do you think each of the following people have handled these outbreaks?”

Mr Andrews, however, had support from 20 per cent of respondents saying he had handled things “very well” and 32 per cent saying “well” while only 14 per cent said “badly” and 11 per cent said “very badly” with another 23 per cent neutral.

Support for state leaders was markedly higher on home ground, however, and the Queensland premier had the strongest performance with 62 per cent support from respondents in her state who said she had done well or very well.

Mr Andrews enjoyed the same home advantage, with 57 per cent of Victorian respondents saying he had done well or very well, while 26 per cent said he had done badly or very badly and 16 per cent were neutral.

The results within each state have a higher margin of error than the national results, however, because the sample sizes were subsets of the national group of 1,607 voters.

Resolve director Jim Reed said the findings on the NSW restrictions showed similar views within the state and across the nation.

“The vast majority believe harder restrictions should have been put in place earlier, in hindsight,” he said.

Mr Reed cautioned, however, that some of the restrictions changed during the online survey.

Voters were given several options on the most recent NSW measures including one saying “this is still too little too late – NSW should be even stricter than this” and another saying “this should have been done sooner, but NSW restrictions are now what they should be”.

On this, 39 per cent of people nationwide said it was “too little too late” and 40 per cent said the restrictions were what they should be but should have been done sooner.

The overall result for these two responses was similar among NSW respondents, at 78 per cent.

Respondents were also given the option of supporting the proposition that “the previous restrictions were enough, and these changes now go too far” or that “restrictions in NSW were always too harsh, and this just makes them worse” as well as the option of saying they were undecided.

The results were that 7 per cent of people nationwide said the restrictions went too far, 4 per cent said they were always too harsh and 11 per cent were undecided.