Asda's Indian meal for two came out on top, with shoppers set to get the most food for their cash in the £5 deal. 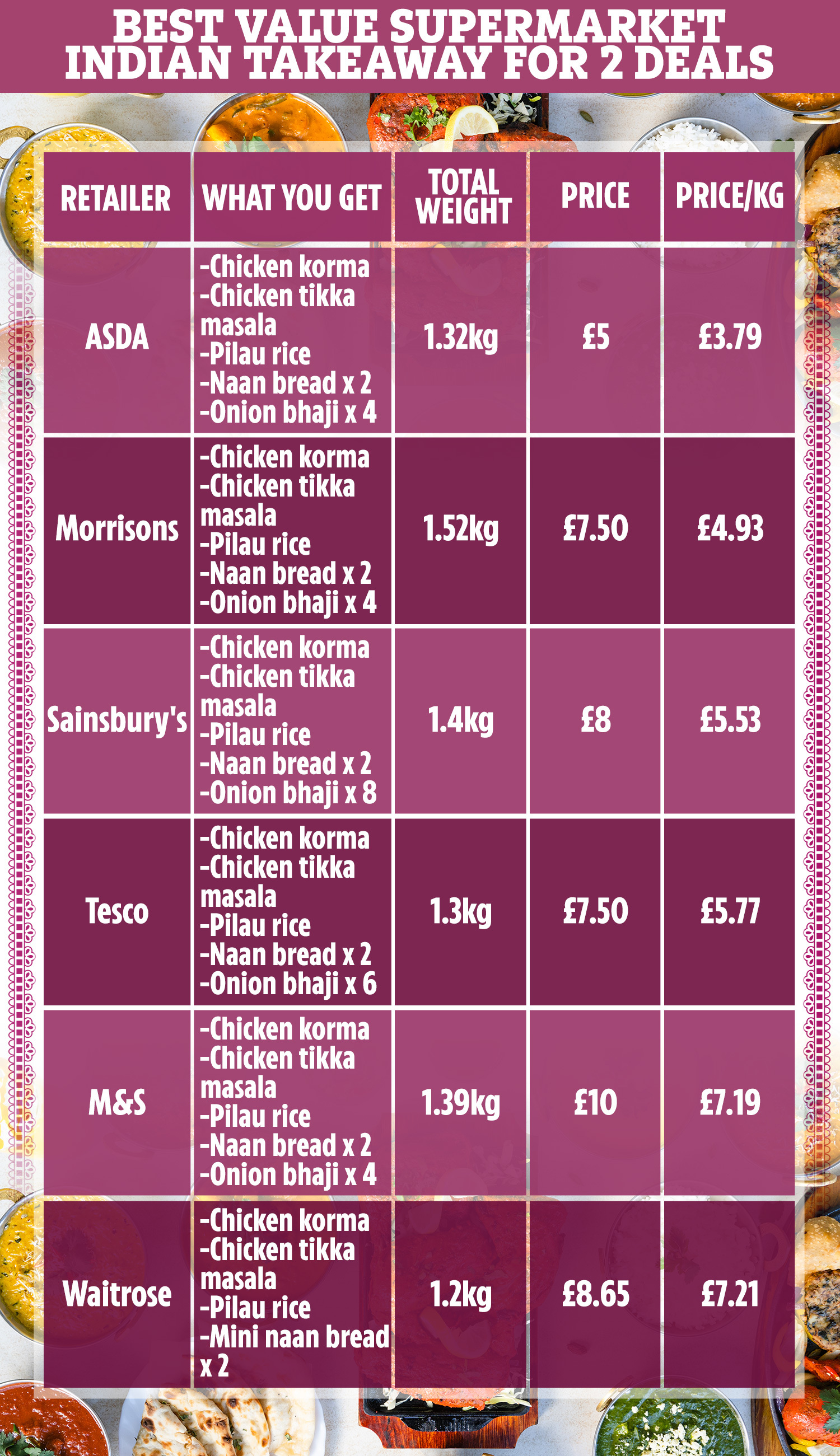 A Foodhub survey found that in 2020, Brits still rank the tikka masala as the nation's favourite curry (38%), while korma comes in a close second (33%).

But with an Indian takeaway meal for one costing £9.19 on average, it can leave your wallet feeling empty.

Supermarket "fakeaways" are a great-tasting cheaper alternative but which retailer will get you the most food for your buck?

We compared own-brand microwave chicken tikka masala and korma ready meals for two based on weight and price to find out which deal offers the best value.

Unfortunately, Aldi, Lidl and Iceland don't sell the combination so we couldn't include them in the best value round up. Here's what we found. 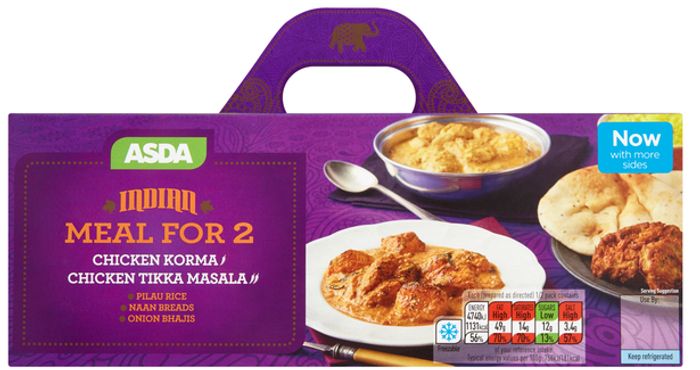 Asda's Indian chicken korma and chicken tikka masala dinner for two deal is actually on offer for £5 as part of it's roll back campaign, making it the cheapest meal in the comparison.

At £3.79 per 1kg, the Asda combination works out £3.42 cheaper than the most expensive meal deal in the roundup from Waitrose.

An Asda spokesperson said: "We pride ourselves on producing quality products at great value prices.

"We’re very happy our customers can celebrate National Curry week with a takeaway treat that won’t break the bank." 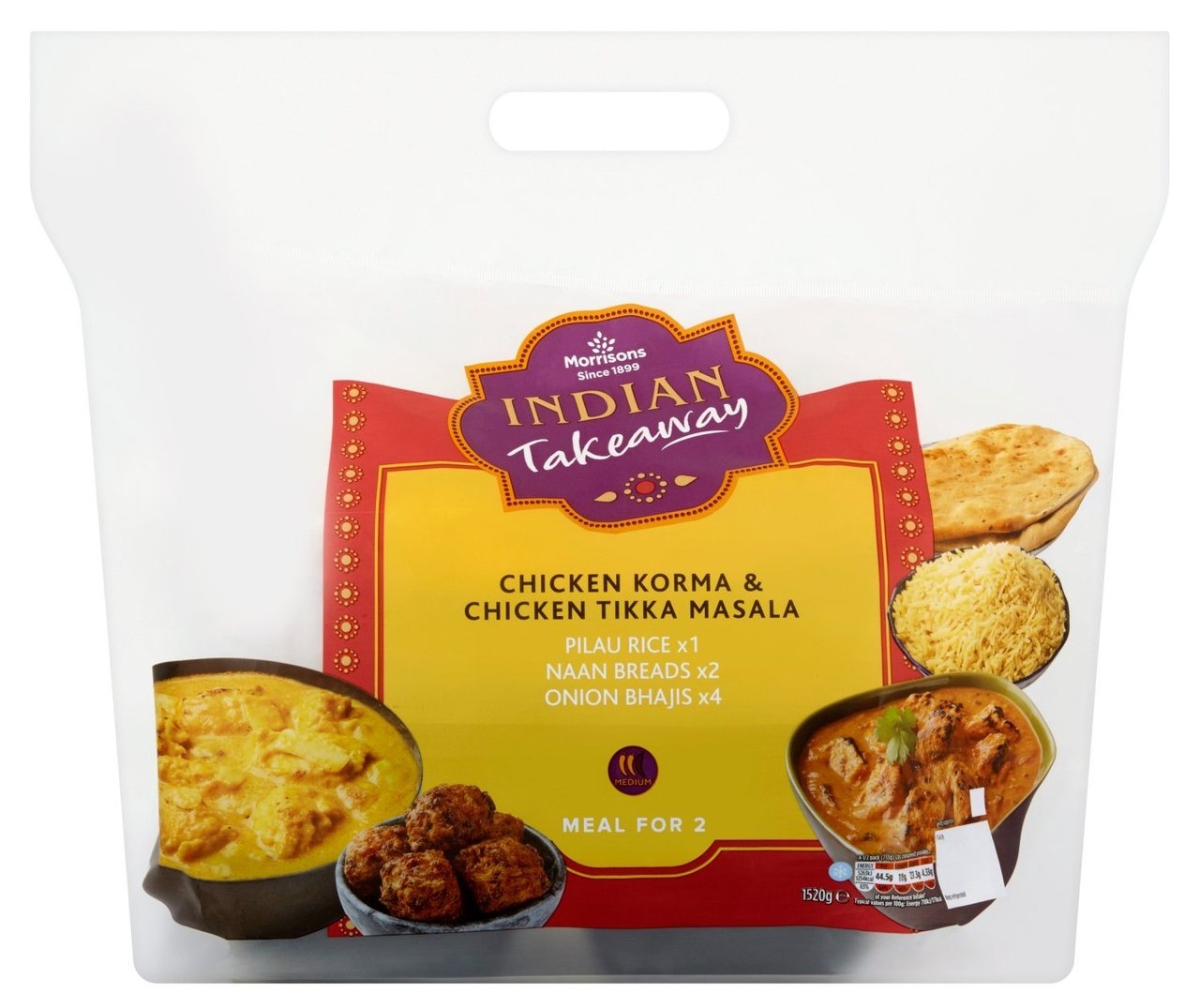 Morrisons' Indian Takeaway for two scooped second place in the curry comparison, coming in at £4.93 per kilogram.

The dinner costs £1.14 more per kilogram compared to the Asda meal deal, but it's still £2.28 cheaper than the most expensive Waitrose meal.

Overall, the dish weighed 1.52kg, making it the supermarket meal that comes with the most amount of food. 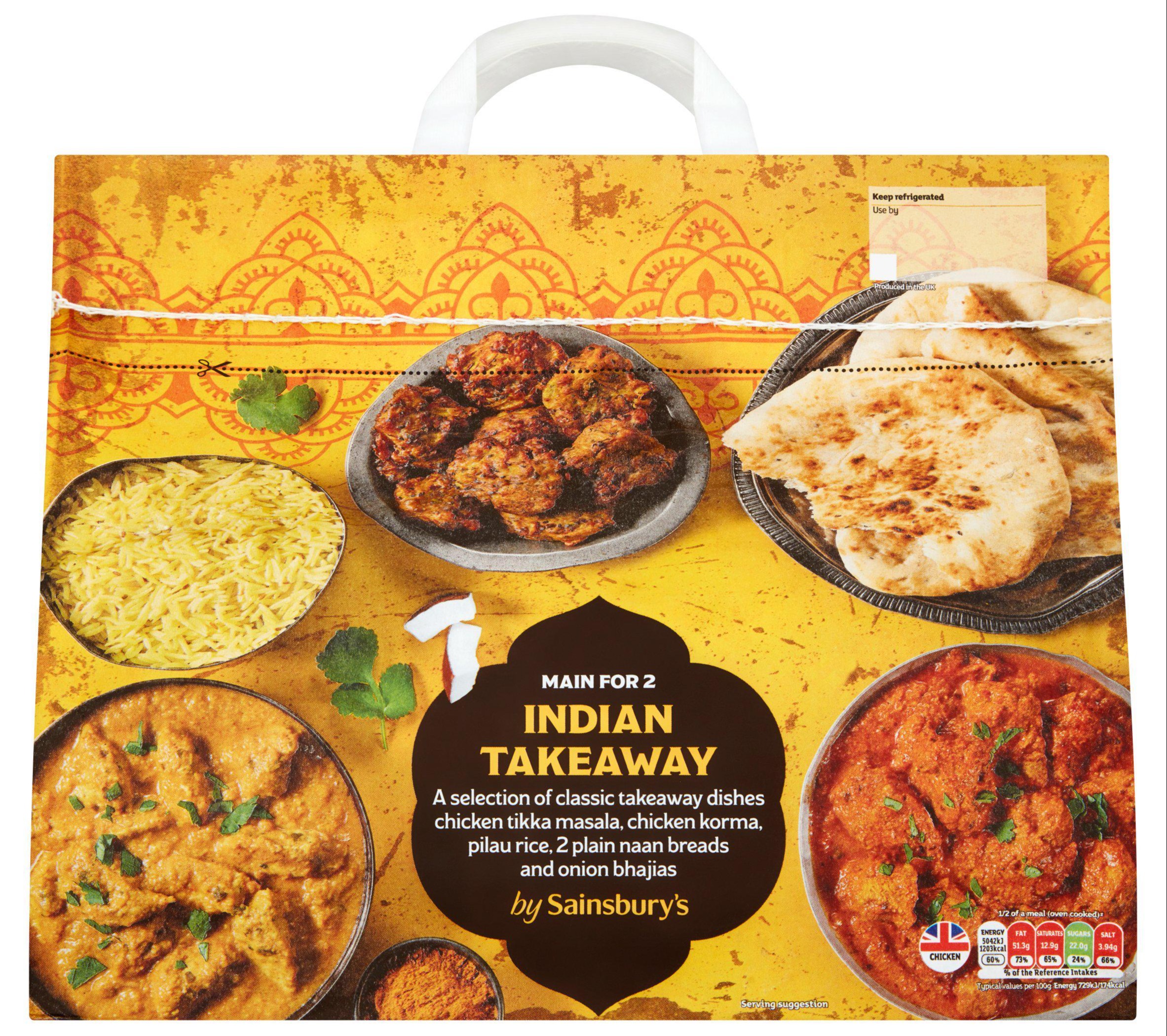 At 1.4kg the Sainsbury's dinner for two was the second largest meal deal but when it comes to value for money, it came in third place.

In total, the meal costs £8 which works out at £4 per head, still far cheaper than a takeaway from your local restaurant.

It's also worth noting that this meal comes with the most onion bhajis out of all the dishes we compared.

With eight in a pack, there's four each to snack on – double what's included in Asda, Morrisons and M&S' deals.

How to save money on your takeaway

TAKEAWAYS taste great but they can hit you hard on your wallet. Here are some tips on how to save on your delivery:

Cashback websites– TopCashback and Quidco will pay you to order your takeaway through them. They're paid by retailers for every click that comes to their website from the cashback site, which eventually trickles down to you. So you'll get cashback on orders placed through them.

Discount codes – Check sites like VoucherCodes for any discount codes you can use to get money off your order.

Buy it from the shops – Okay, it might not taste exactly the same but you'll save the most money by picking up your favourite dish from your local supermarket.

Student discounts – If you're in full-time education or a member of the National Students Union then you may be able to get a discount of up to 15 per cent off the bill. It's always worth asking before you place your order.

The Tesco Indian takeaway meal deal for two might be 50p cheaper overall than the offer at Sainsbury's but you'll be getting less food for your money.

Tesco's dish weighs 1.3kg while the meal from Sainsbury's comes with 100g extra to munch on.

In fact, Tesco's meal is the second smallest out of all of the takeaway meals we looked at. 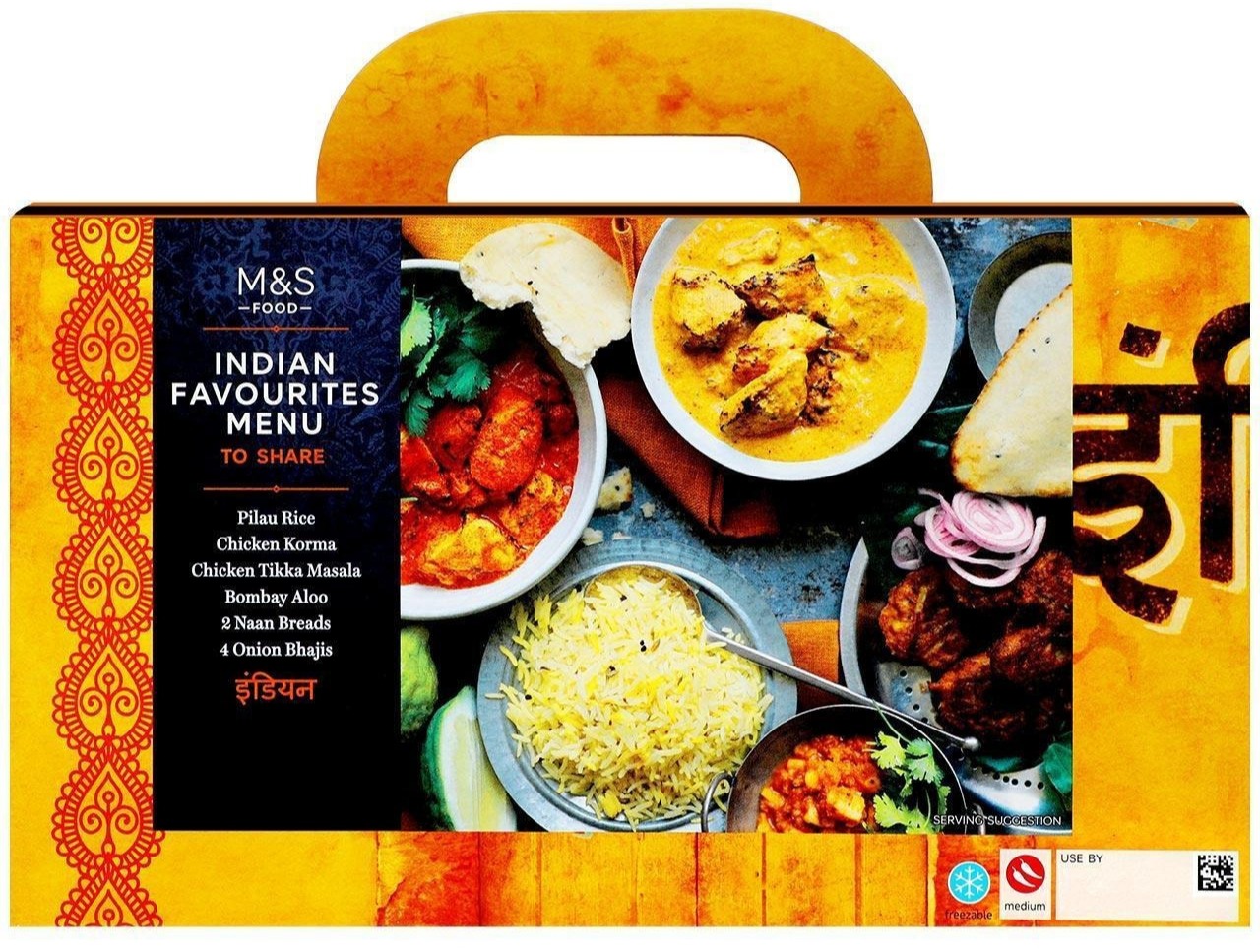 Unsurprisingly, M&S' Indian takeaway is the most expensive meal included in the comparison and came out second worst value for money, costing an expensive £7.19 per kilogram.

The meal does come with an extra side dish to share compared to the other supermarket deals, Bombay aloo, but even so, at 1.39kg it doesn't actually weigh as much as some of the others.

This would suggest that the actual dishes included in the deal are smaller then those from other retailers.

Shoppers can now order their takeaway curries from M&S for delivery through Ocado, which teamed up in September in a £750million deal.

Although its worth bearing in mind there's a £40 minimum spend and delivery charge of between £2.99 and £6.99 depending on the cost of your order, delivery slot time and destination. 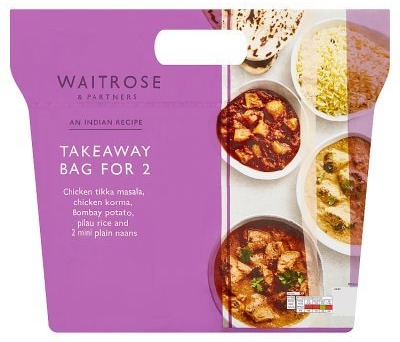 Waitrose meal for two is the second most expensive deal after M&S at £8.65 over all but at 1.2kg it also comes with the least amount of food, making it the worst value for money.

The supermarket has ditched the onion bhajis in favour of another sharing side dish of Bombay potato but the variety isn't enough to beat off competition.

It costs £7.21 per kilogram, making it £3.42 more expensive than the cheapest meal deal from Asda which costs £3.29 per kilogram.

A Waitrose spokesperson told The Sun: "We have an uncompromising focus on the quality of our ingredients which are reflected in the taste of our meals – for instance we use high quality ingredients and we only use British chicken which has been reared to the highest welfare standards."

If you like getting value for money, we've rated high street lunchtime meal deals, including Boots and Tesco, to find you where you'll get the most sarnie for your cash.

Opting for a "fakeaway" can also save you cash. We spoke to one Chinese takeaway fan who saved £16 by making her favourite dishes herself.

Meanehile, this mum feeds her family of ten on just £150 a week with amazing McDonald’s and Nando’s fakeaways.