Whatever Happened to the Child Stars From Friends?

Twenty-six years ago, a little show called Friends debuted, making stars out of its six leads. But they're far from the only ones to find success after the NBC sitcom went off the air. 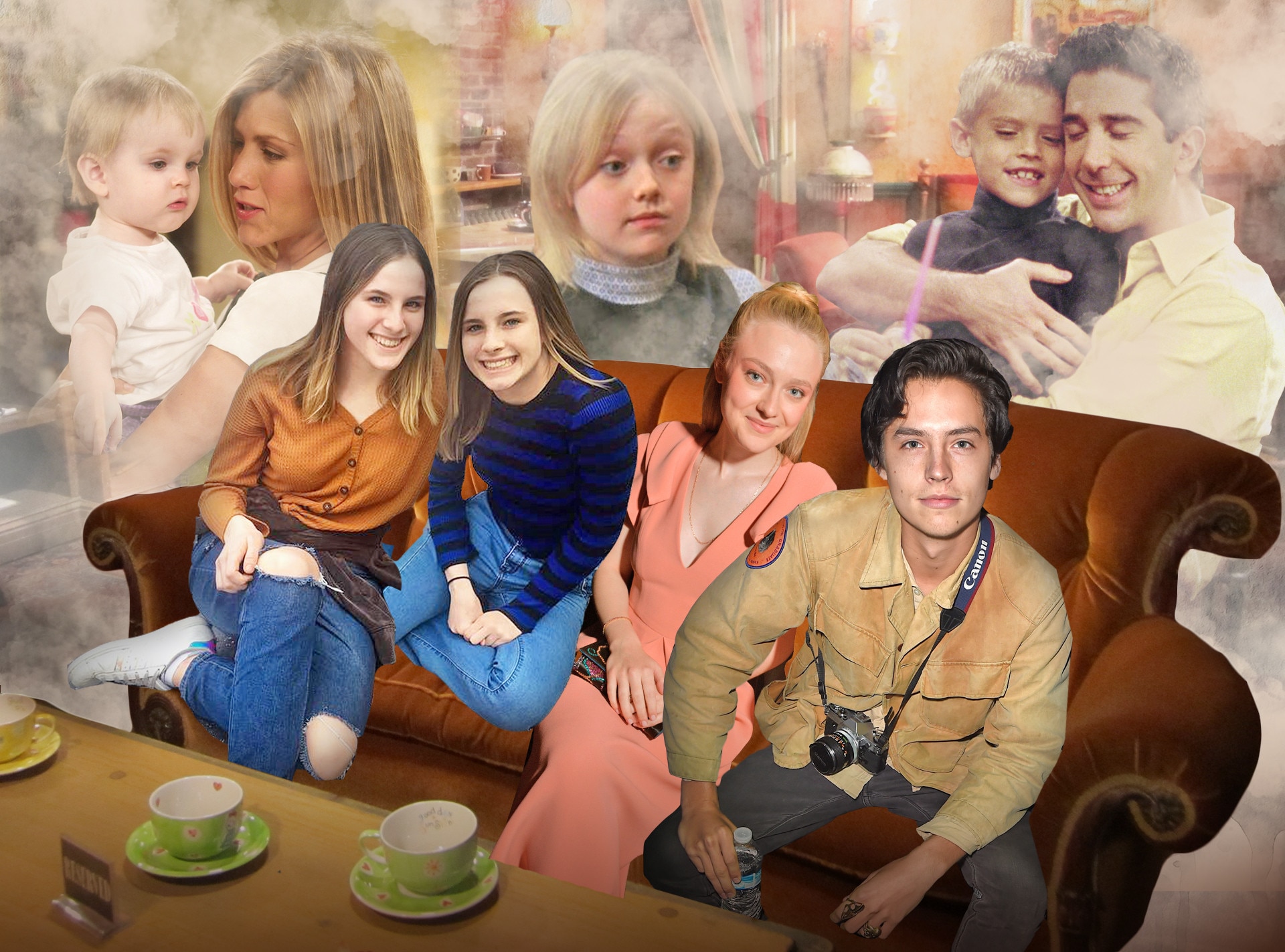 More than 15 years after they exited TV screens for good, the cast of Friends is doing their damndest to prove they're still there for us.

As if it weren't enough that a reunion is definitely, absolutely coming to HBO Max…eventually or that the whole gang got together last year, Courteney Cox, Lisa Kudrow, Matthew Perry, Matt LeBlanc and David Schwimmer joining forces to help Jennifer Aniston break the Internet with her October 2019 Instagram debut, but the girls' also gifted us with an Emmys bit Sept. 20 that helped us keep our fan fiction alive.

Because, yes, we 100 percent want to believe that the trio has been living together since NBC's must-see sitcom premiered exactly 26 years ago today. As Aniston joked with host Jimmy Kimmel, "We've been roommates since 1994….Hello?"

And lest we forget that our favorite nostalgia viewing debuted a whole two-and-a-half decades ago, last year's blast from the past moment really drove that point home.

While it makes perfect sense that the twins who played baby Emma Geller-Green would have grown up in the years since Aniston and Schwimmer serenaded them with their best rendition of Sir Mix-A-Lot's "Baby Got Back," seeing them as teenagers was a bit jarring. But, hey, not only does it appear the new millennium has treated 18-year-old Cali Sheldon and Noelle Sheldon well (we presume those residual checks aren't bad), their acting careers are coming along swimmingly as well.

Though the teens, based in Manhattan Beach, Calif., haven't made it a point to pursue acting hard core–"Our girls go to a normal school, and they go on auditions once in a while, but we don't make it our top priority," mom Gretchen Carpenter told Bustle back in 2015—they still nabbed plum roles in Jordan Peele's March 2019 horror flick release, Us.

Granting an interview to their high school newspaper, the identical twins remarked how floored they were to have a chance to act alongside the likes of Lupita Nyong'o, Winston Duke, and Elisabeth Moss. (Forget the fact that their very first gig had them working with Emmy winner Aniston.)

"I never really thought I could meet people like [Nyong'o, Duke and Moss], so it was a really cool experience," Noelle said of their turn as thoroughly creepy twins. "I didn't want to mess up because they were watching. So it was stressful, but in a good way."

Thankfully Peele provided a steady guiding hand. "Everyone there was super friendly, and Jordan Peele was insanely nice and he is an actual genius," Cali said. "To see him work was really cool, [and] he was super nice to us and he [was] just like a regular guy trying to make us feel comfortable."

Though they've just begun their freshman year at the University of California, Los Angeles (Cali has said her dream is to get a biochemistry degree, "so I can become a chemist and cure cancer. Then I want to petition for women to be allowed into a football league. Then I'm going to write a book") the 10-day job filming in Santa Cruz inspired them each to reconsider their dream career paths.

"I actually thought that I did not want to be an actress before we got the parts because I thought it would be too much work," Cali said, noting the instability of the field, "but seeing all of those [actors on set] as just regular people inspired me."

Should the teens forge ahead in Hollywood, they'd certainly be amongst good company. Plenty of their contemporaries continued acting after stints on the beloved comedy and its safe to say their careers are anything but D.O.A.

Before landing in Us, the duo earned parts in college films, local stage work and a 2007 pilot, maintaining a healthy perspective on the cutthroat world of acting. "I'm not very competitive because you usually don't get the roles," Cali told Bustle in 2015, "and if you do, it's cool, but if you don't it's nothing to be sad about, because the person who got it is going to do great." The two have also made it a point not to be too impressed with themselves. "Our friends think it's really cool because they think we're famous," Noelle told ET that same year. "I particularly don't think we're famous or anything because we were babies, so people aren't going to say, 'Oh, you're baby Emma from Friends.'"

Though he and twin Dylan Sprouse have been acting since they were eight-months-old, he struggled through some of his seven appearances as Ross' son Ben. Sure, everyone was "tremendously nice," as the 28-year-old put it to the New York Post, but it was hard working alongside Aniston, "because I was so in love with her. I was infatuated. I was speechless—I'd get all bubbly and forget my lines and completely blank." Though he went on to star in many iterations of The Suite Life of Zack and Cody with Dylan and current hit Riverdale (with now-ex-girlfriend Lili Reinhart), he's still fond of his earlier work: "People can call me 'Ben' on the street and I will turn around."

Since her 2004 cameo as the wise-beyond-her-years kid who helps Joey accept Monica and Chandler's move, the 26-year-old SAG nominee has booked dozens of roles in movies (including Ocean's Eight and the Twilight franchise) and TV (in 2018 she starred in TNT's period drama The Alienist.) But younger sis Elle Fanning still hasn't seen her guest spot on the sitcom. "I had an [audition] to be on Friends once….I think I was gonna be one of Phoebe's triplets," she recently recalled in PorterEdit. "I auditioned for it but I didn't get it and I was like, 'I'm boycotting the show, I'm never watching this again.'" So when her sister was cast, "I refused to watch the episode."

The small screen life suits the 28-year-old. A few years after appearing as trick-or-treater Lelani Mayolanofavich (who accepts a check from eager-to-please Rachel), Haley Osment's sister landed a career-making gig on Hannah Montana alongside Miley Cyrus. Then, following a string of smaller work, headed back to the tube with ABC Family's Young and Hungry. "I thoroughly enjoy sitcoms; the schedule that comes with them and the camaraderie you feel with a certain group of people," she told Backstage in 2015. "I did a show for five years and took a little bit of a break, went to college, did some music. And then my first pilot season back from all that, I read this script and loved it."

Already a star thanks to Spy Kids when he turned up on Friends (Sabara played Owen, a kid who learns he's adopted through Chandler's inadvertent blabbing), he stayed on track after his 2003 stint. Standout gigs include a recurring role on Weeds and a voice part on Ultimate Spider-Man, but perhaps his most treasured title came when he married singer Meghan Trainor in December 2018. "I'm just extra obsessed with him and he's extra romantic about everything," Trainor gushed of her new husband at the 2019 Grammys. Echoed the 28-year-old, "It's way more relaxing now because it's locked in."

Now starring on NBC's Good Girls—and perhaps most fondly known from Arrested Development and Parenthood—the 32-year-old still maintains good memories of her child actress days, including a spot as Brown Bird Sarah Tuttle, who landed in a cast after Ross sent her tumbling down the stairs. "Growing up as a kid actor, I feel like it could really go either way," she told The Huffington Post in 2017. "I luckily had a super strong family base. My parents have always been so amazing and [are] my heroes. They really were so careful all along the way to choose projects that were with good people and honest people, and also they really gave me the gift of choosing if I wanted to do something or not."

"My mom did a lot of theater when I was younger and I caught the bug just like mommy," the now-34-year-old mom of two told Great Day Washington of entering the business at age seven. Her memorable turn as disapproving Brown Bird Charla Nichols, who labeled Ross a "scrud" for breaking Sarah's leg, led to parts on other sitcoms such as Family Matters and Sister, Sister as well as film work including Love & Basketball and the Doctor Dolittle films. But her most notable role may have been her voice work as Penny Proud on Disney Channel's The Proud Family.

Little brother to Tia Mowry and Tamera Mowry, the 34-year-old's lengthy list of credits includes a five-year stint on Kim Possible and Baby Daddy, plus three years on BET's The Game. But he admits he still gets recognized for playing "little boy," one of several kids Phoebe sings to in the 1996 post-Super Bowl episode. "You wouldn't believe how many texts I get from people whenever that episode comes on," he told TVLine. "Our Baby Daddy director Michael Lembeck directed that episode of Friends, so he still says I helped him win an Emmy. I'm like, 'Sure, Michael, you're welcome!'"

Of the triplets Phoebe birthed for brother Frank, the 24-year-old may have the most thriving career to date. While Dante Pastula (Frank Buffay Jr. Jr.) was in 2004's The Polar Express and Sierra Marcoux (Chandler Buffay) has done commercial work and 2007's The Poughkeepsie Tapes, Arm appeared with Demi Lovato on Sonny with a Chance, its spinoff So Random! and most recently in A.P. Bio, now on Peacock. She's got a side hustle, too. "My dad wanted to make sure I wouldn't get bored or rowdy in the waiting rooms of auditions, so he bought me a sketchbook and sets of markers, crayons, and colored pencils," she told Relate Magazine of her child actor days. "Luckily, I'm still able to make time to draw and paint."