Wife reveals her turmoil after her husband confessed to KISSING another woman on a night out but insists it was just a ‘harmless mistake’ – so would YOU forgive him?

A woman has described her turmoil after her husband admitted to kissing a female colleague during a night out.

Writing on parenting site Mumsnet, the British woman asked for advice after her partner insisted it was nothing more than a ‘harmless mistake’.

She revealed her husband could often be ‘flirty’ and had even had other women try to kiss him during nights out without her.

Writing under the handle ILoveGandT, the heartbroken wife explained: ‘My husband went out last night for a few drinks with some of the guys from his work.

‘I went to bed at around 1am because he never normally comes home much before 4 or 5am on a night out so I didn’t stay up to wait for him.

‘I messaged him when I got into bed telling him to stay safe and that I love him and that I was going to sleep. About a minute later, I had a message that simply said !I’m so sorry but I’ve kissed someone tonight. I’m coming home.” 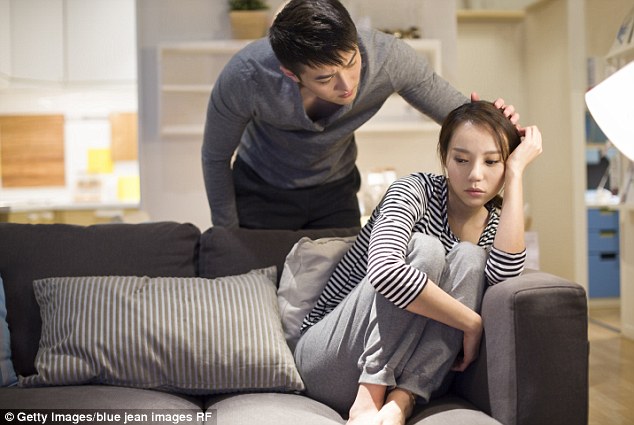 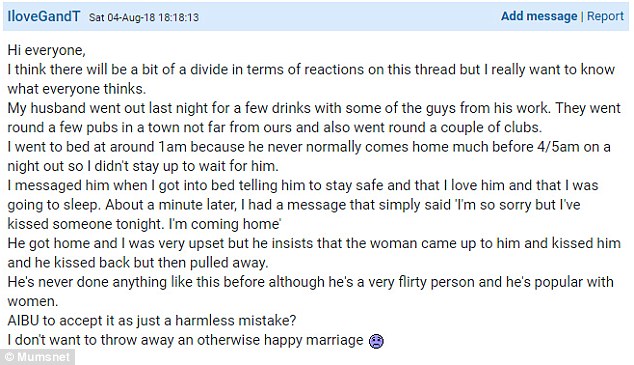 ‘He got home and I was very upset but he insists that the woman came up to him and kissed him and he kissed back but then pulled away.

‘He’s never done anything like this before although he’s a very flirty person and he’s popular with women. [Am I being unreasonable] to accept it as just a harmless mistake? I don’t want to throw away an otherwise happy marriage.’

Many users urged the woman not end her marriage over the situation and to give him credit for speaking out about the kiss.

One woman wrote: ‘I’d not end things over that. He told you, he came home, he obviously feels bad. I can see it possibly taking a second or two to register that someone is kissing you and to stop them.

Another penned: ‘I’d be upset but wouldn’t end it over this. He’s sorry and he came straight home, it could have ended a lot worse than this. On the other hand, if it became a regular thing it would be different.’

Others were sceptical as to whether the husband was truly innocent and advised the woman to be weary that he might not be telling the full story.

A user speaking under the handle ‘GandTthankyou’ asked the wife to consider if her husband’s friends had encouraged his behaviour.

She said: ‘I wouldn’t trust him following this. Why do all these women want to kiss him? I mean what are his mates and him doing to encourage this? Even if he looks like Tom Hardy people don’t just try and kiss you every time you go out.’

Another wrote: ‘I’ve never had to pull away from a strangers kiss, not once, certainly not twice. Women hate rejection so there would have been a build up to that kiss where she knew she wasn’t going to be rebuffed. He is giving off single available, up-for-it vibes.’

Many Mumsnet users advised the woman to keep a closer eye on her husband and to have a conversation about his behaviour towards other women.

One person said: ‘I wouldn’t end a marriage over that. He was honest despite having no real need to be so, and that goes in his favour.

‘However, I think a serious conversation needs to be had about boundaries with women. Kisses don’t generally come out of nowhere, nor do they usually come as a result of a bit of mild friendly banter.

‘If the woman felt the moment was right for a kiss she obvious believed she had received signals from your husband that he might respond favorably to her advances.’ 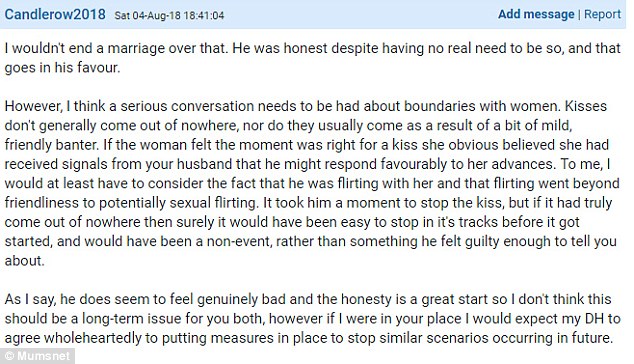 Another wrote: ‘I wouldn’t end my relationship over it. He told you straight away, didn’t initiate, pulled away.

‘However he’d have to be showing a lot of remorse and telling how he let himself be in that situation in the first place. Also, he’d have to treat me like a queen for a while!

‘Seriously though I’d keep an eye on him for awhile. Does he go out late often? How is your relationship generally? Is this totally out of character?’