Woman who shopped EVERY night, bans herself from making purchases

A woman with a shopping addiction who was so embarrassed by the volume of her parcels that she sent her returns from different post office branches, has embarked on a one-year ‘no spend challenge.

Arriving home every evening from her job in forensic science to a stack of packages, Zoe Paterson, 38, from Angus, Scotland, said her habit spiralled so beyond her control that her online spending sprees became an almost nightly event.

Often ordering the same item in a variety of colours, she would have so much to send back that she kept a diary of her orders and outstanding refunds.

The singleton was too embarrassed to ship it all from one place, and so resorted to driving around to share her returns between different Post Offices. 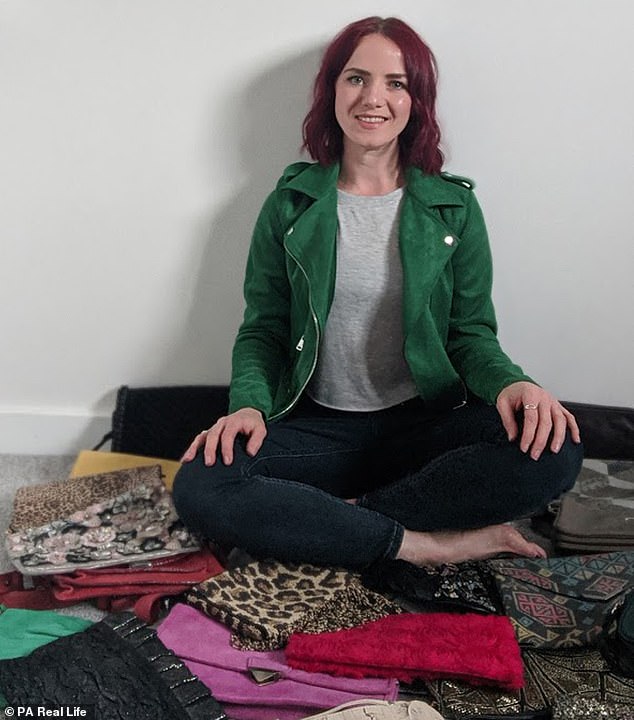 Zoe Paterson, 38 (pictured), from Angus, Scotland, who would make an online order every night, has embarked on a one-year ‘no spend’ challenge 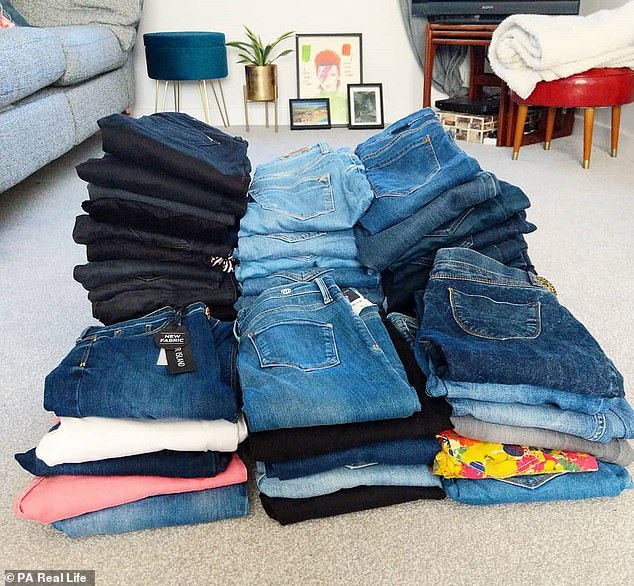 Zoe who was returning orders worth hundreds of pounds each month, said she felt embarrassed to take her parcels to the Post Office. Pictured: Zoe’s collection of skinny jeans

Zoe has bravely cracked her compulsive behaviour by banning herself from buying any new clothes, shoes or accessories for 365 days.

Spending an average of £200 a month, Zoe said: ‘My shopping habit got ridiculous.

‘I would online shop almost every day. I’d return a fair bit, too, so it was hard to keep track of exactly what I was spending. I’d say it was at least a few hundred a month.

‘I got so embarrassed by how often I was going to the Post Office to send back items that I would drive around different branches. My car boot would be full to the brim with parcels – 10 at a time.

‘I paid a one-off fee for a years’ worth of free next day deliveries on one site.

‘When the year was up, I got an email saying I had saved £1,715 in delivery charges from that site alone. I worked out that would have been 280 orders – about five a week – just from that one shop.’

By the end of 2019, Zoe was feeling completely overwhelmed by her ever-expanding wardrobe and decided to take drastic action, placing herself on a year-long spending ban. 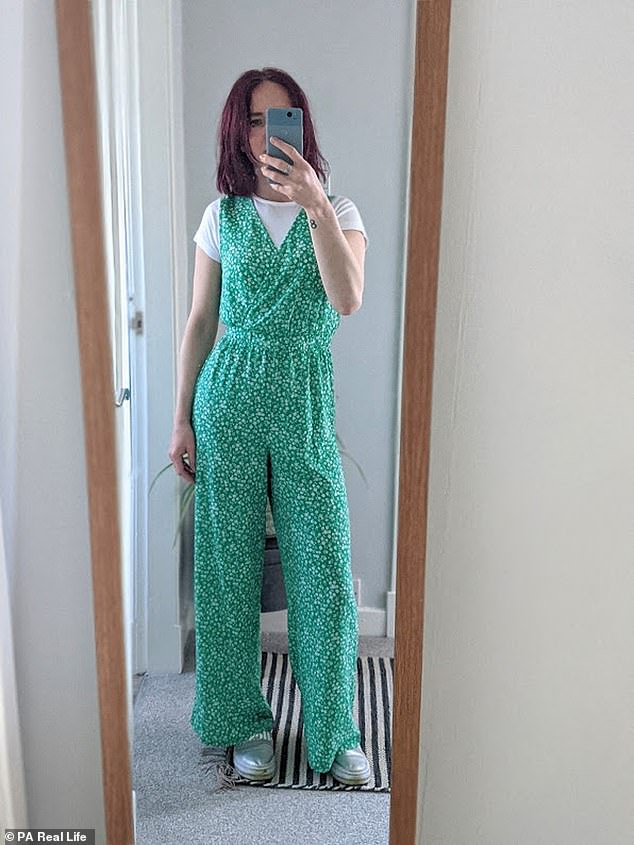 Zoe (pictured) paid a one-off fee for a years’ worth of free next day deliveries on one website , receiving an email at the end of the year revealing that she saved £1,715 in delivery charges on her 280 orders 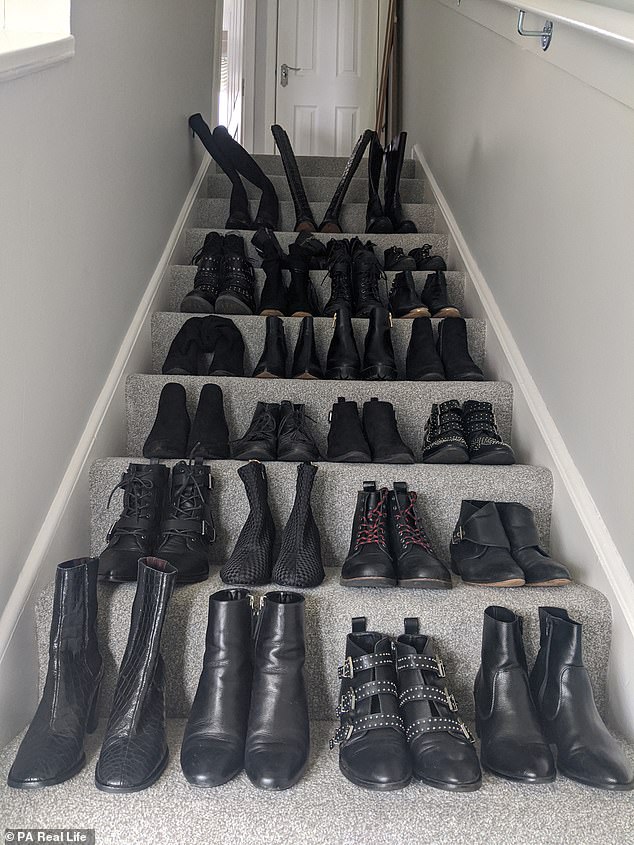 Zoe revealed that her mindset has completely transformed in the five months since she began her ‘no-spend ‘challenge. Pictured: Zoe’s collection of black boots 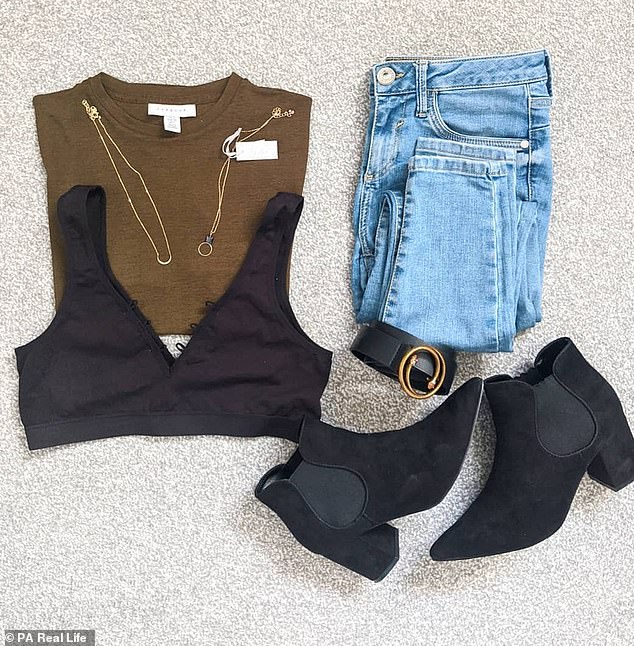 Zoe said the challenge is teaching her to appreciate the items that she already has and to find happiness in life’s simple things. Pictured: Zoe restyling her clothes

Now, five months in, she has completely changed her mindset and believes she has finally kicked her shopping addiction for good.

‘If you’re thinking of doing this yourself, you have to find the benefits that are right for you,’ she explained.

‘For some people, they will be financial, for others environmental. For me, it has been learning to appreciate what I already have and find happiness in life’s simple things.

‘For example, for the past few years, I have wanted to do up my patio and driveway, but could never afford it, but doing this challenge has changed that.’

Growing up, Zoe was always interested in fashion and had a childhood penchant for collecting purses. 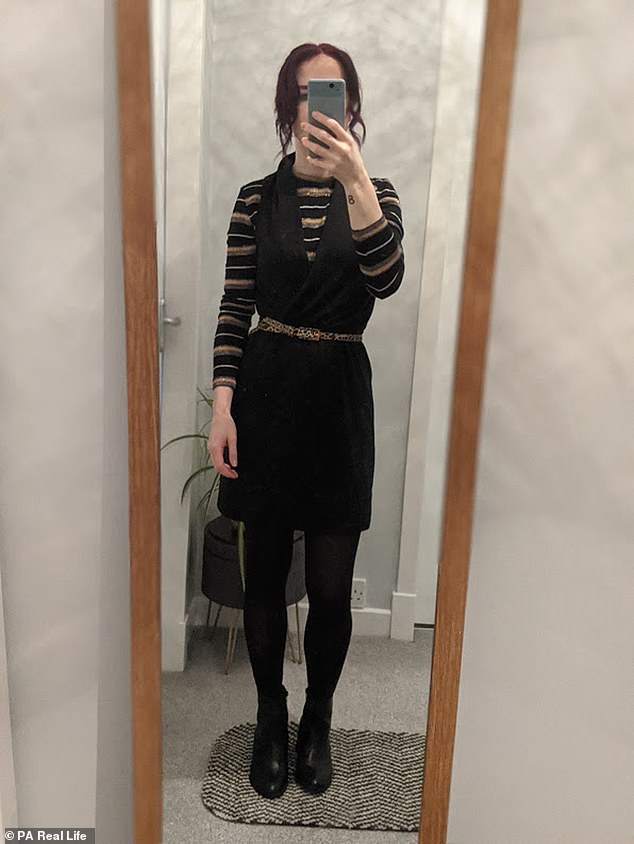 Zoe (pictured) who has always had an interest in fashion, would spend her time cutting out outfits she liked from magazines when she was younger

Then, as she grew older, before the days of social media, she would pore through magazines, cutting out pictures of outfits she liked before heading out to the shops to buy as close a replica as possible.

‘I don’t really follow trends as such – I have quite a classic, minimalist style – but I have always really enjoyed shopping,’ she said.

‘I’d go through phases. For example, about six years ago, it was all about shoes. I would order six pairs at a time. I wouldn’t necessarily keep them all, but it was still excessive.

‘Then I’d move on to bags, then jeans, which I racked up 48 pairs of. I didn’t even realise that wasn’t normal until I spoke to friends who told me they only had two or three pairs.’ 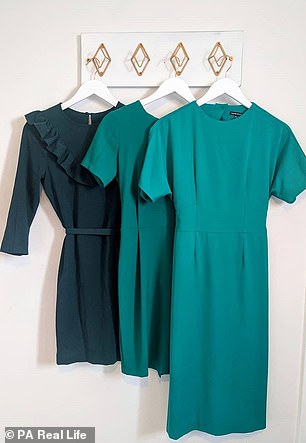 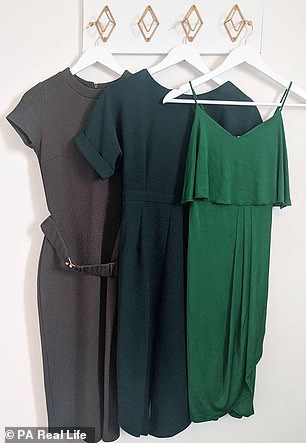 Zoe said she would spot items that she liked on Instagram and track them down on the internet to buy. Pictured: The 38-year-old’s collection of green dresses

And as social media became more popular, Zoe would scroll her Instagram feed in the same way she had once devoured magazines.

She continued: ‘I would see pictures of outfits I liked and click straight off Instagram and onto the internet to track them down, so I could buy them – picking up various other items on the way.

‘Targeted adverts were also a problem. Once I’d bought one thing, I’d be bombarded with recommendations for something similar.

By 2019, Zoe began to feel overwhelmed and struggled to keep track of what she had ordered. 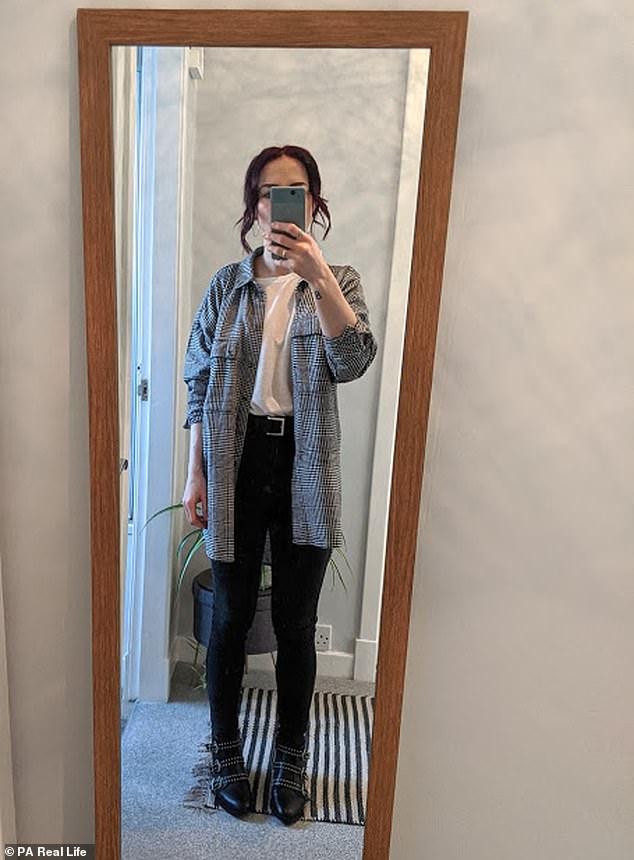 On the odd occasion when she had a little clear out and donated some unwanted items to charity, she always found she felt ‘lighter.’

‘That got me thinking about how much better I would feel if I really went for it and stopped all the spending,’ she said.

‘I had so many clothes already and was still buying more. I asked myself when I would feel I had enough?

When would I be happy with what I owned?

‘It sounds morbid, but I even started thinking about what would happen to all my material possessions if I wasn’t here. What would the point in it all have been?’

At the beginning of 2020, Zoe set herself the ambitious goal of going for the entire year without buying clothes, shoes or accessories. 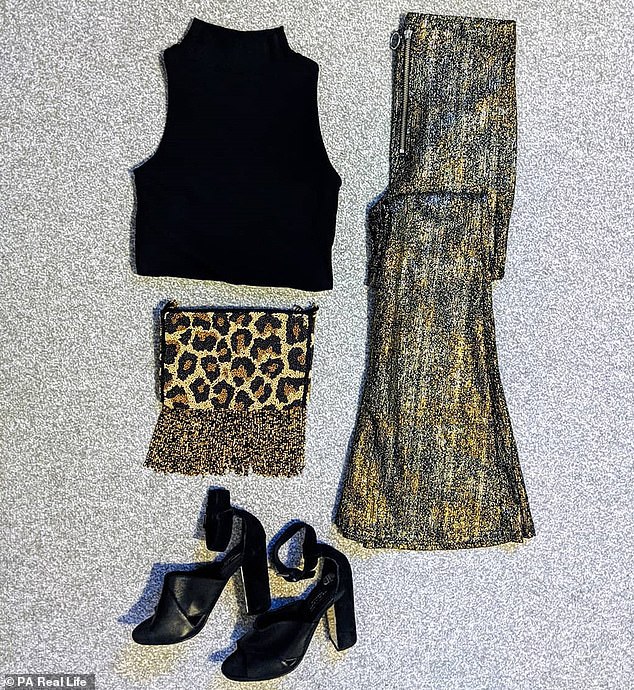 Zoe set up an Instagram account to keep ‘no spend’ challenge on track and found a community of like-minded individuals. Pictured: Zoe restyling her clothes

Setting up an Instagram account to keep herself on track, she found an entire community of like-minded people, also following the same challenge, known as a ‘no spend’ or ‘no shopping year.’

‘I’ve followed other challenges before, like Veganuary, or giving things up for Lent, and have always been really strict, so I didn’t understand why shopping had been so hard to kick,’ she said.

‘Finding other people doing the same thing really helped, though. We would share tips on how to stay on track, and how to style the clothes we already owned, so we weren’t tempted to buy anything new.

‘In time, my social media feeds were no longer full of people encouraging me to buy. I wasn’t seeing the latest trends anymore, or being led by what was in the shops.

‘The support gave me such a boost.’ 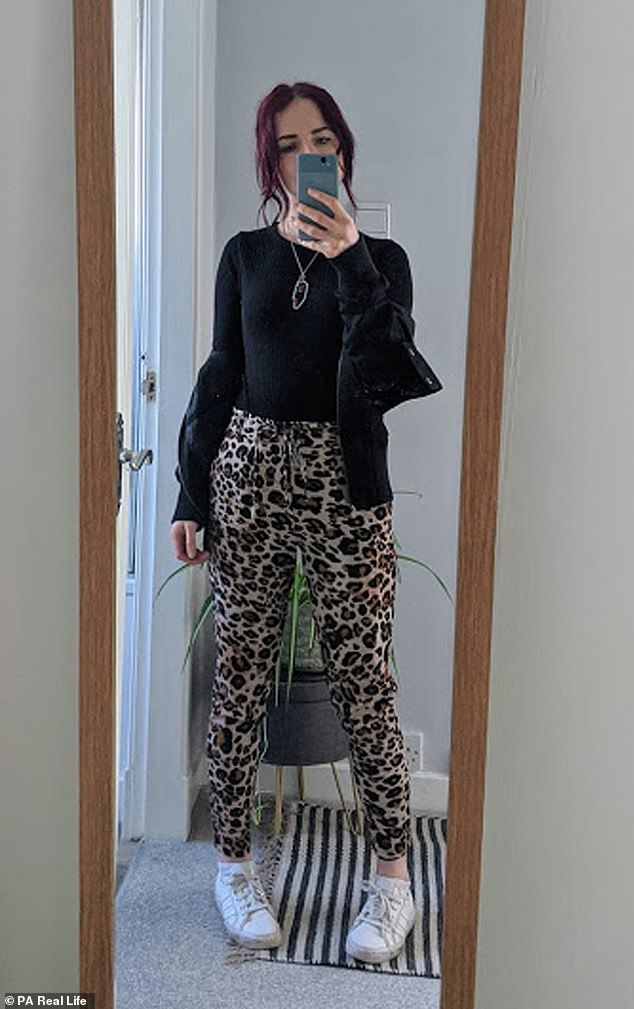 On a few occasions, Zoe admits she has almost fallen off the wagon – even adding items to her online shopping carts, before coming to her senses and removing them.

But she has not caved in, sticking resolutely to her no shopping goal.

She continued: ‘There have been times where it has been difficult, but I kept asking myself, ‘Why do you need this?’ and ‘Do you have anything like this already?’

‘Learning more about fashion waste and how much ends up rotting away in a landfill every year, kept me on track, too. Whenever I felt tempted to buy, I would think about that and it was an incentive to keep going.

‘I don’t want to contribute to that. The world can’t take the amount of waste as it is.’

As well as reaping financial and environmental benefits, Zoe has also found her general mental wellbeing has improved.

‘It was almost a nightly thing, coming home from work to a stack of packages waiting for me, which I’d then try on, organise into what I was keeping and what I wasn’t, then race to the Post Office to sort out my returns,’ she said. 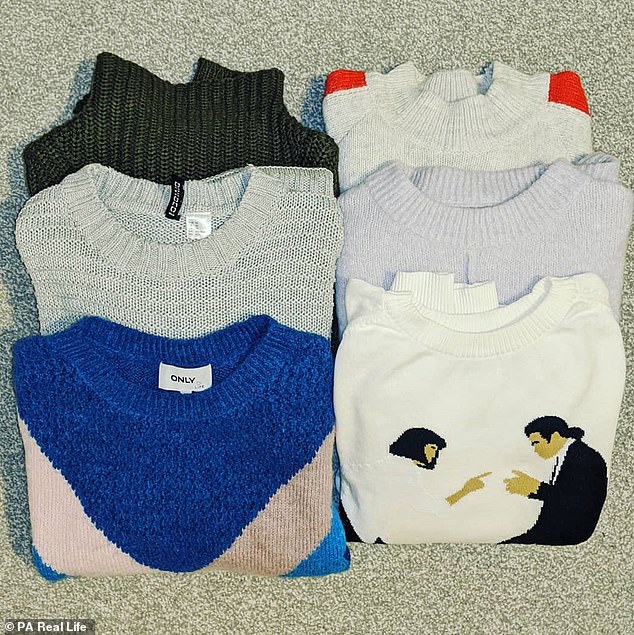 ‘Now I have saved hundreds already. Rather than focusing my spare time and money on clothes, I’m appreciating spending it on my house and garden.

‘I have the time to potter about and enjoy the garden now. I am free of that stress and have that time back.’

Zoe hopes sharing her story will encourage others to follow suit. She is particularly urging people to stop ordering non-essential items at the moment, to help protect delivery drivers from being exposed to Covid-19.

Offering her top tips for staying on track with a no spend challenge, she added: ‘I know people are very reliant on social media to stay in touch, especially right now, but I would advise unfollowing everyone that encourages you to spend.

‘You don’t need to see bloggers unwrapping these huge clothing hauls – especially when they are more than likely being paid to promote them. 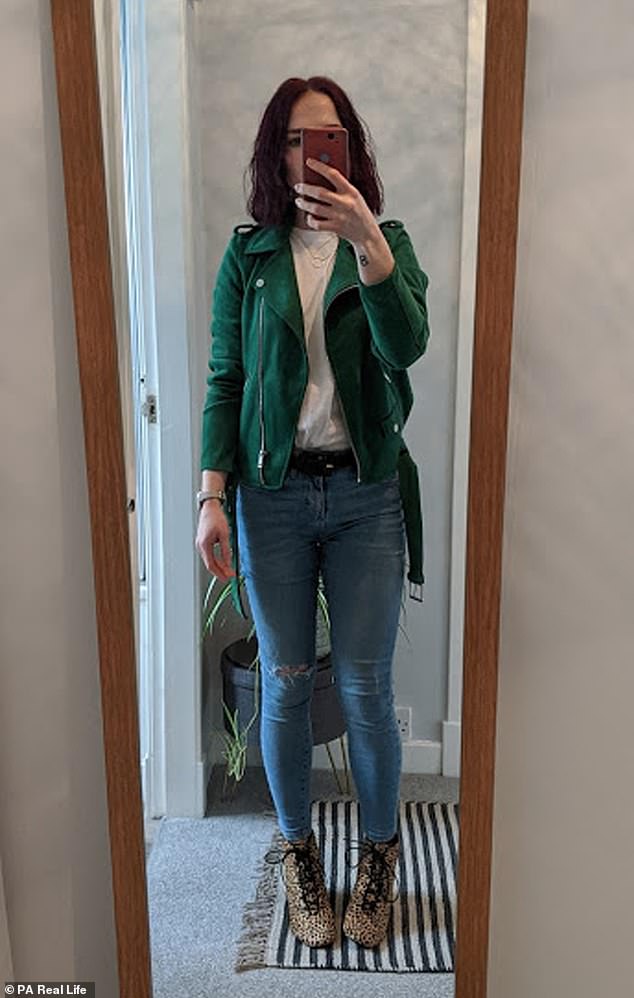 Zoe (pictured) advises those who are often tempted to spend, to place the money they were going to splurge on clothes into a separate account

‘I’d also say that if you ever feel tempted to spend, take the money you would have splurged on clothes and put it in a different account. That way, you will really open your eyes to what you’re saving, and how quickly it adds up.

‘My mindset has completely changed now, and I can’t see myself ever going back. Even when my challenge is over, I will be shopping more in charity shops and buying second hand rather than new stuff.

‘This whole thing has made me take a step back and realise that there is lots of joy and appreciation to be found in what I already own. I don’t need more.’

Alma Griffith, a psychotherapist counsellor of Mindserenity.co.uk, said: ‘It is estimated that there are six per cent of the UK population now addicted to shopping, predominately woman and young people – although this may be higher with online shopping now so popular. 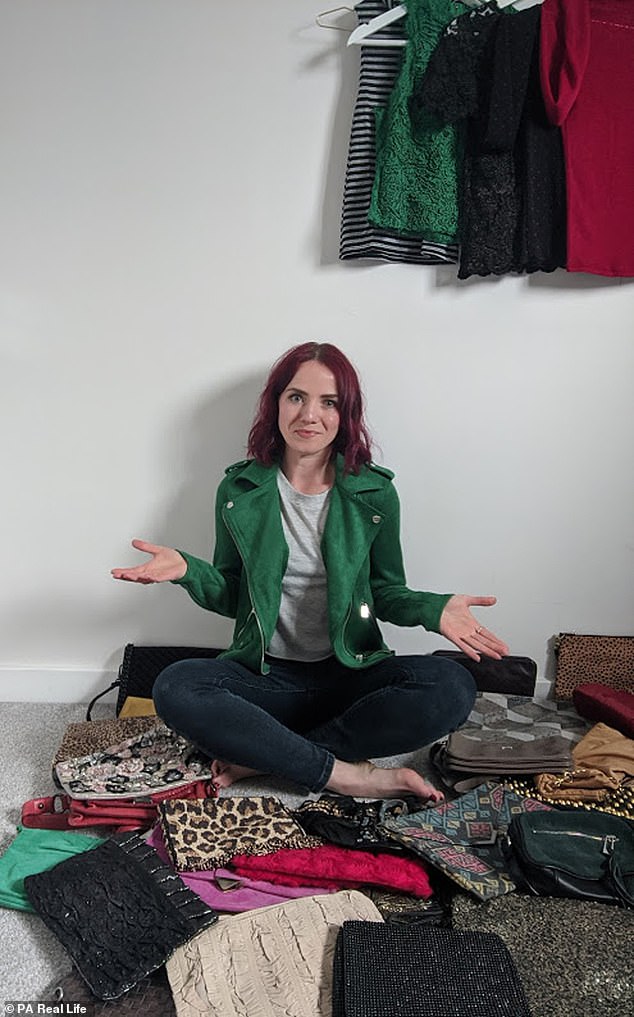 ‘Warning signs include a pre-occupation with buying or shopping, using shopping to relieve negative emotions and hiding or lying about purchases and expenditure.

‘Behind the behaviour is an underlying chronic psychological drive – a coping mechanism that forces the individual to pursue reward by compulsive buying, whether they can afford to or not.

‘The purchase brings an initial high a bit like a gambler feels when placing a bet but what follows is a sense of guilt, shame and remorse, which will then ignite the compulsive cycle.’ 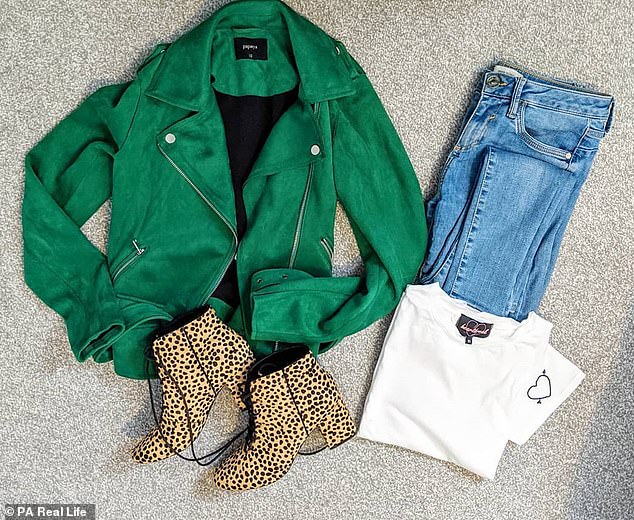 Alma Griffith who is a psychotherapist counsellor, compares shopping addiction to gambling with an initial high that is followed by remorse and guilt. Pictured: Zoe restyling her clothes