Two young women who flew into Perth from Adelaide without an exemption and then escaped hotel quarantine while waiting to be flown home have narrowly avoided jail after a tearful court appearance.

Isata Jalloh, 19, and Banchi Techana, 22, arrived at Perth Airport on August 17 and told authorities they wanted to holiday in WA and visit friends, despite border closures being in place since April. 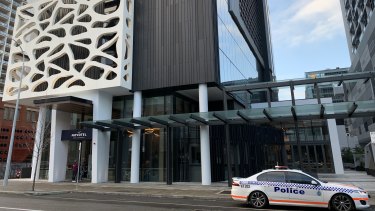 The pair were escorted to the Novotel Hotel on Murray Street to quarantine until a return flight to Adelaide could be arranged.

But about 1.30am they left the hotel through the emergency stairwell and ignored orders from security guards to return to their rooms, instead catching a taxi to a unit in Coolbellup, where two men were living.

The women were apprehended at the unit by police about 8.30am on Tuesday after officers tracked Jalloh’s mobile phone from a call earlier in the morning, during which she laughed and hung up on a police officer asking where she was.

Both women pleaded guilty and were sentenced in Perth Magistrates Court on Thursday after two days in custody.

Jalloh received a $5000 fine, while Techana, who was also charged with obstructing public officers while at the Perth Watch House, received an eight-month, two-week jail term, suspended for 12 months.

Techana, who appeared via video link from Bandyup Women’s Prison, originally did not understand her sentence and began crying hysterically at the thought of going to jail.

Lawyers for both women claimed the pair did not realise the strict border restrictions imposed by the WA government.

Jalloh had weeks earlier travelled from Queensland to South Australia, receiving approval to enter the state hours before her flight. She was not required to self-isolate.

Magistrate Ben White said he didn’t accept the duo’s excuse they were unaware of WA’s hard border, with the police prosecutor labelling the pair “dishonest and deceitful”.

“It’s difficult to think anyone in the current climate could be in the dark about those sorts of things,” he said.

Techana’s lawyer, Gregory Chin, said the dancer had moved to Perth for a “fresh start” and had planned to bring over her one-year-old daughter once she had settled and found a job.

“She didn’t realise how serious everything was.”

Mr Chin said Techana refusing to have her DNA taken and to "squat and cough" at the Perth Watch House was due to her shock at the "spiralling situation", however police prosecutors said Techana had a record and would have been familiar with the procedures.

The court heard multiple officers at the station were required to hold Techana down and forcefully take her DNA sample.

Mr White said the women had placed the community at risk and had narrowly avoided serving jail time due to their young ages.

“There’s risks to health, there’s risks of this sort of behaviour resulting in further lockdowns,” he said.

The convicted women will now likely be returned to hotel quarantine before being sent back to Adelaide.