When it came time to choose a theme for the massive mural that would capture a piece of Wonthaggi’s soul, the obvious and most cliched choice was coal.

Instead, the town’s business and community leaders chose a more appealing scene not usually associated with the former mining town: a white-eared honeyeater perched on a branch beside a yellow-tailed black cockatoo.

The artwork, which takes up the outside wall of a double-storey building, is part of a campaign to rejuvenate the Bass Coast town and its image. 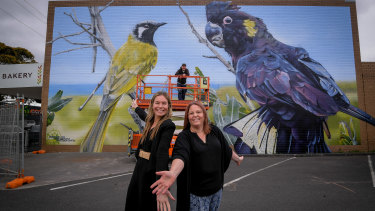 Dee Connell, co-owner of the bakery on which the artwork has been painted, says many people wanted to highlight Wonthaggi’s mining history.

“It was a hard decision,” she says. “We didn’t want to do what’s obvious. We wanted to do what people didn’t know.”

Wonthaggi offers historic charm, a burgeoning cafe scene and enough op shops to overwhelm the most seasoned hipster shopper. But it has stiff competition in attracting visitors.

For decades its tourism potential has been overwhelmed by the might of wildly popular holiday destinations a short drive away. Think Phillip Island and Inverloch.

Ms Connell has lived in Wonthaggi since 2004, after moving from Mooloolaba on Queensland’s Sunshine Coast.

“There was a strong community feel,” she says. “It felt like it had a lot of potential.”

But she concedes that with holiday hotspots nearby visitors are easily lured away. 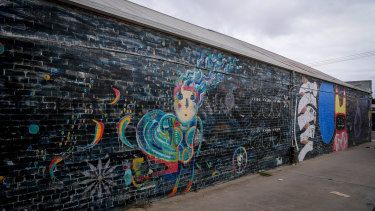 “I feel like that’s something we’ve always wanted to work on. We want people to know we’re here as well.”

The town’s leaders hope to entice people to visit, live and invest in Wonthaggi through public art, laneway revivals and promoting its surrounding natural beauty and history.

In the first half of the 20th century, Wonthaggi’s fortunes were tied to the state coal mine, which operated from 1909 until 1968, producing millions of tonnes of coal.

When it closed, Bass Coast mayor Brett Tessari says, the town was expected to fold with it.

Wonthaggi has also suffered from a much rougher image than the nearby tourism meccas.

"It was always viewed as the poorer relative of the others. There's no doubt about it," Cr Tessari says. "Wonthaggi is the working-class town where you come for your shopping and pass through is how it's perceived."

But he says that image is already changing. The town's developing coffee culture is encouraging people to spend time there.

Cr Tessari believes Wonthaggi’s survival has much to do with the strength of its community spirit, one that cannot be suppressed.

“It’s just that never-say-die attitude,” he says. “The people who are moving to this area are attracted by the community feel. They’re contributing to that. It’s not a hard sell to get them to buy into what’s here.” 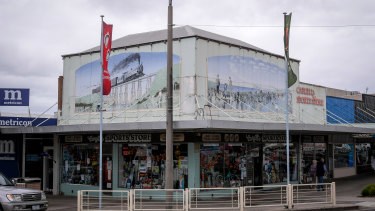 One of the town’s first public artworks, above a shop in Wonthaggi’s centre. Credit:Eddie Jim

New families are moving into the town. Victorian Planning Authority figures show Wonthaggi’s population now sits just above 8000 and is expected to double within about 20 years.

Wonthaggi Business and Tourism Association president Amy Easton says a lively nightlife scene is an element that is still missing. But she hopes that presents an opportunity for entrepreneurial business people.

“We’re really craving some diverse nightlife. There’s a lot of people in the community who, after an art show, want to have a nice wine somewhere.” 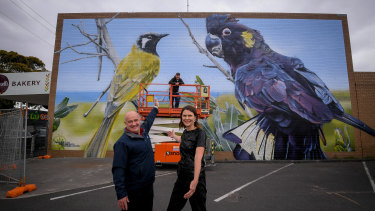 Local artists have also been given large brick "canvases" to enliven the laneways – much like Melbourne’s CBD revival in the 1990s. There was a laneway festival last year that locals hope will be staged again when it’s safe.

Work is also being done to refresh tired streetscapes with plants and new lighting.

Dvate has painted silos in regional Victoria which have become tourist attractions. He submitted and then refined his Wonthaggi design several times before agreement was reached on the final version.

“One of my initial birds was an ibis, but they’re not particularly well liked around here,” he says.

The artist believes the shades of the birds help illustrate the natural environment they inhabit.

“It’s also about working with colours that fit with the landscape.”

Dee Connell says she has never doubted her decision to leave behind Queensland's sunshine for life on the Bass Coast. She has developed a strong business and urges other business operators to do the same – particularly restaurateurs.