The World’s Most Extraordinary Homes goes to Israel

From a house with THREE gardens to mansion boasting panoramic views of the Sea of Galilee: Inside Israel’s most extraordinary homes

In an ancient land famed for its religious heritage, the architects behind these jaw-dropping Israeli properties were tasked with blending history and tradition with modernity, while combating the relentless heat.

In this week’s installment of BBC Two’s The World’s Most Extraordinary Homes, Caroline Quentin joins architect Piers Taylor to visit some of the most sensational homes in the Middle Eastern country.

One property, inspired by the owner’s Islamic heritage, boasts not one but three breathtaking gardens for outdoor living, and architecture used by Muslims for generations.

The pair also take a peek around the envy-inducing, sprawling summer home of a wealthy family with a passion for modernist design, in an area described as a ‘millionaire’s playground’.

Here, FEMAIL offers a sneak peek inside each of the extraordinary homes…

1. THE HOUSE WITH THREE GARDENS 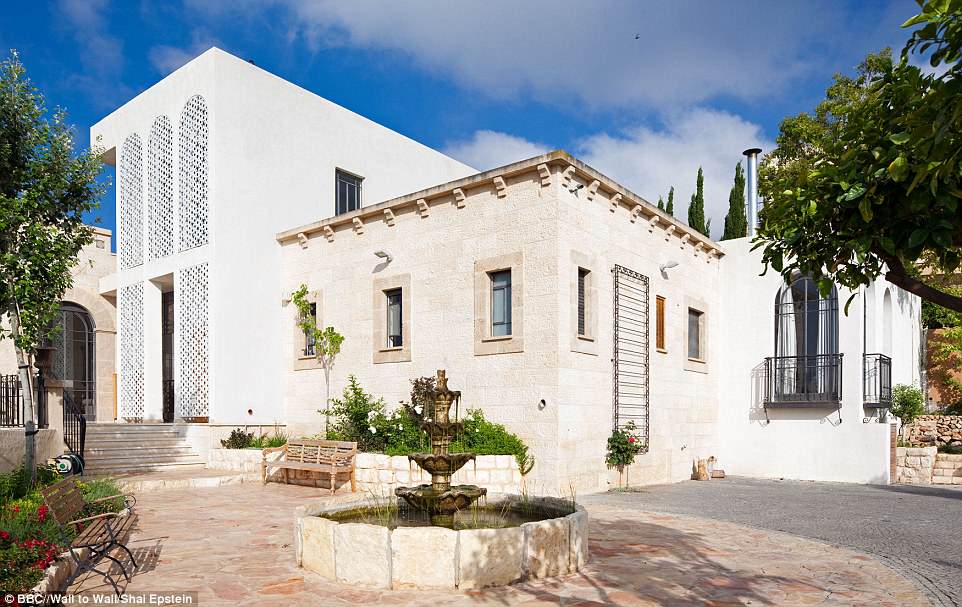 The House with Three Gardens is heavily influenced by its owners Islamic heritage, and features traditional mashrabiya windows at the front 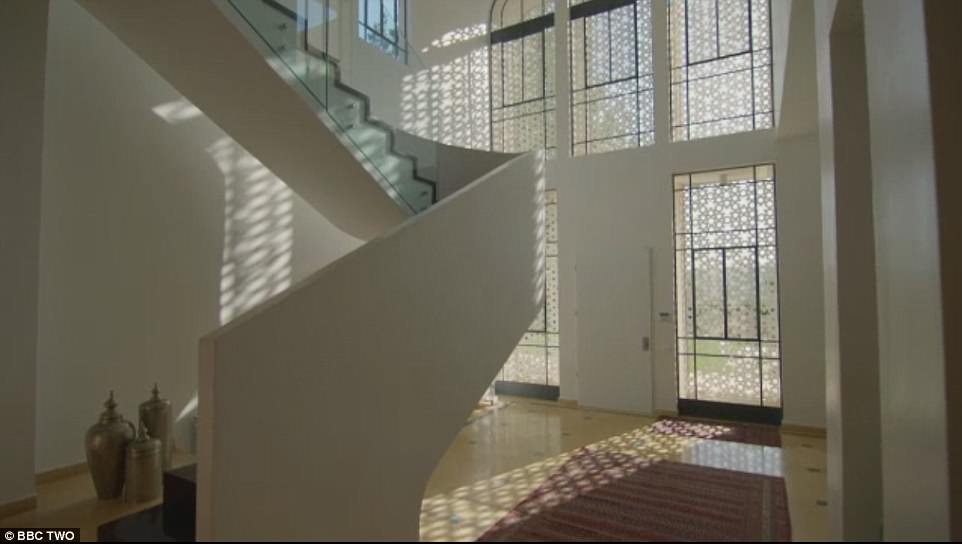 Guests are met with a striking contemporary white staircase on entrance, mixing modern design with traditional 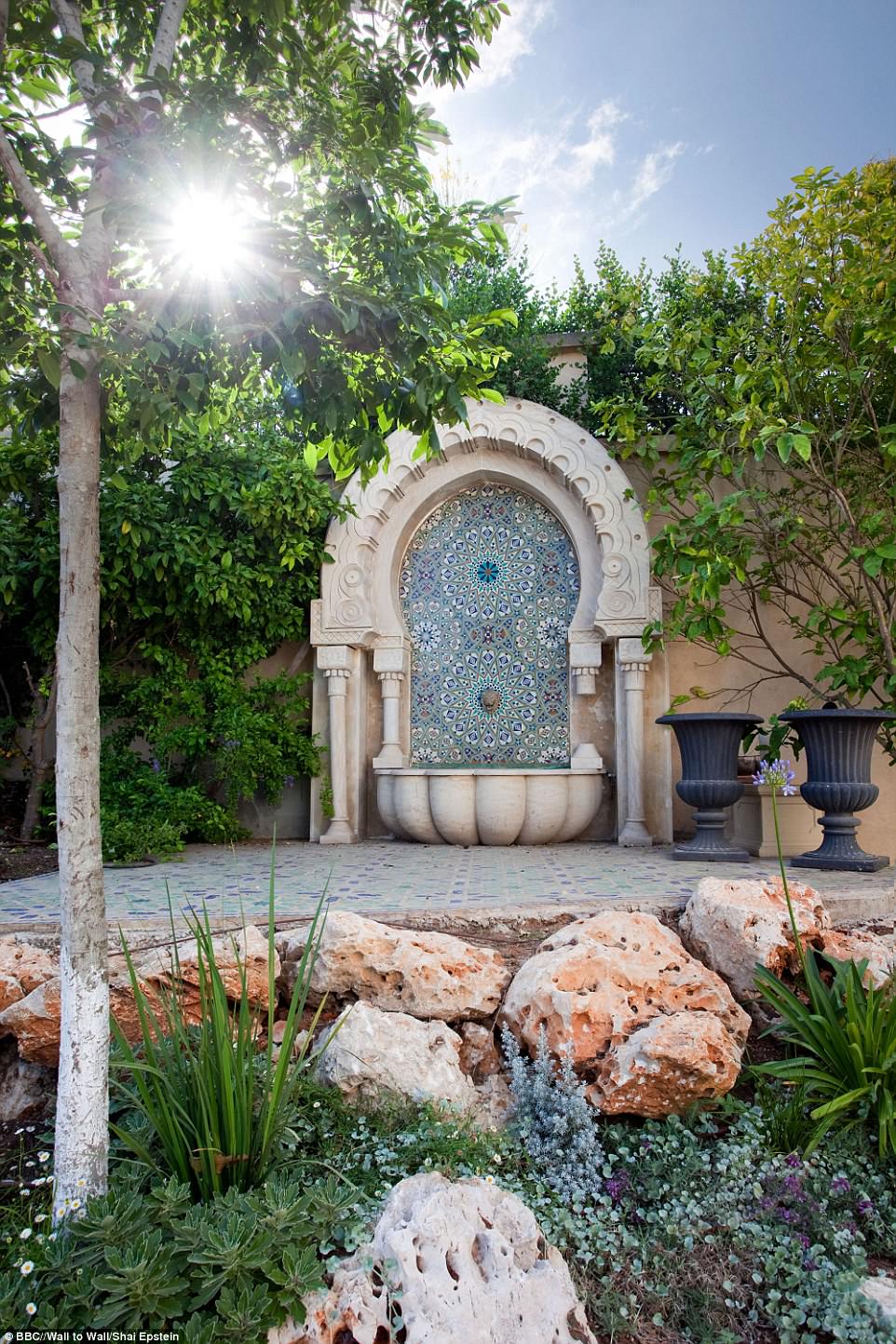 Located in Musmus near the West Bank, the House with Three Gardens is heavily influenced by its owner’s Islamic heritage.

He and his family have lived on the land for generations, and some of the stone used in building the current home was taken from the walls of his late grandfather’s house, which once stood on the plot.

The first thing visitors see when approaching the property is the traditional mashrabiya on the front – a type of window enclosed with carved wood that lets dappled light stream into the property through its latticework.

The design of the latticework features pomegranates; symbolic of abundance and beauty.

The property is the perfect mix of modern and traditional as inside guests are met with a striking contemporary white staircase on entrance. 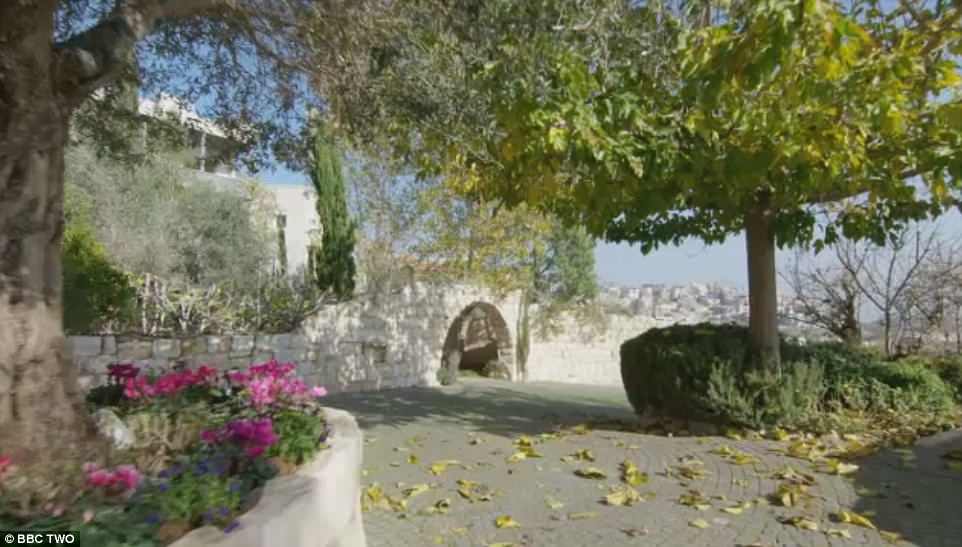 Stones from the owner’s grandfather’s house, which also stood on this land, were used to build some of the walls outside 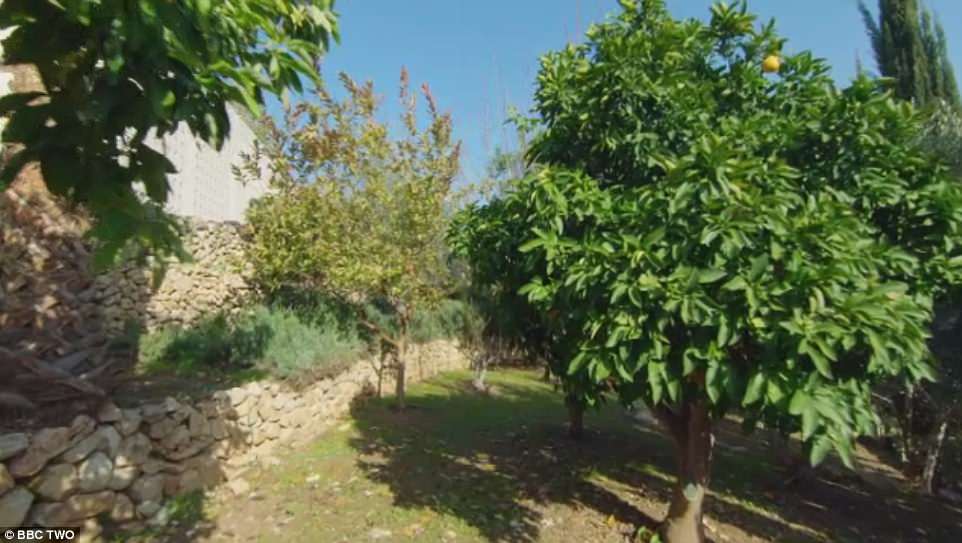 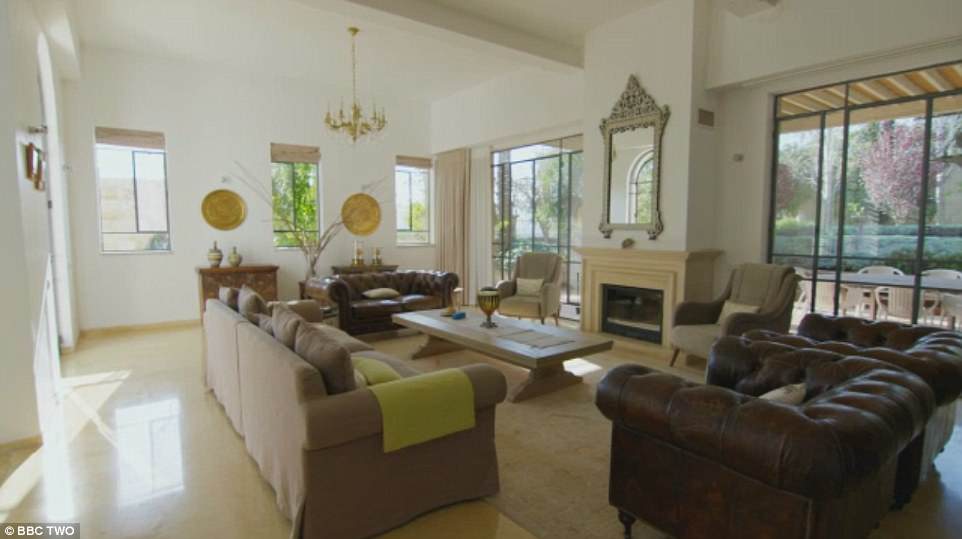 The property comes with plenty of outdoor space for the residents to enjoy the area’s six months of sunshine, which can reach up to 40 degrees in heat.

One stunning garden is a place for family time and reflection, and features beautiful sculptures and artworks reflecting the Islamic style of the house.

There are two other areas that serve as agricultural gardens – known as Bustans – where the family grows fruits and vegetables like grapefruit and olives and fountains flow with water.

The house is more modern on the inside and features stylish interiors in shades of brown and plenty of space for the large family.

There are four bedrooms, two living areas and an outdoor terrace that is perfect for taking in the breathtaking outdoors. 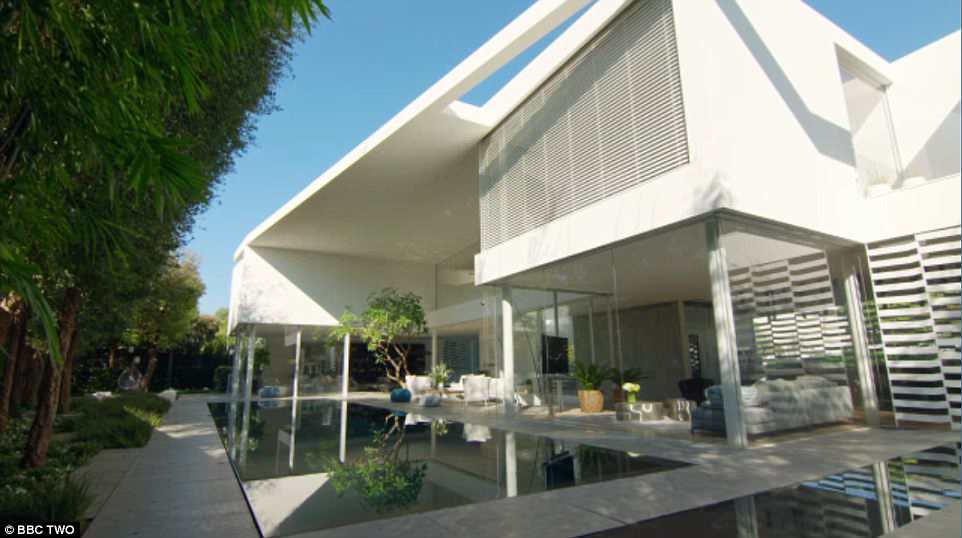 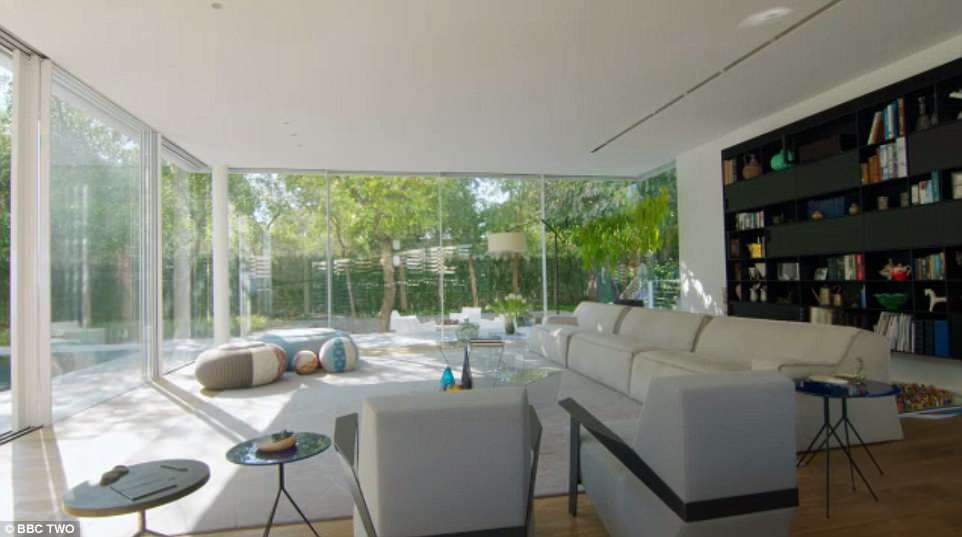 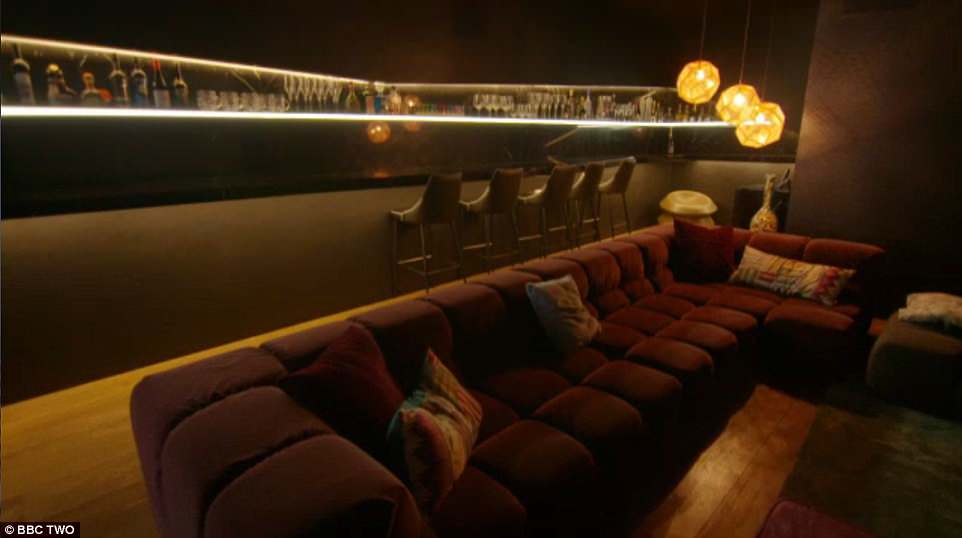 Inside are three large en suite bedrooms, dressing rooms, bar area and a cinema room with a huge TV screen

The J House is the definition of luxury living, with its palatial pools, masses of space and expensive interiors.

The property, which is situated in the affluent beachfront community and so-called ‘millionaire’s playground’ of Herzliya Pituah, was designed by British businessman Steve and his Israeli wife Ossie to be their dream family home.

The home is built around the outdoor areas and has sliding glass doors to open up the living spaces to the sunshine.

The home is meant to look effortless, and was built onto columns that are sunk into extra deep foundations supported by a network of beams hidden in floors and walls. 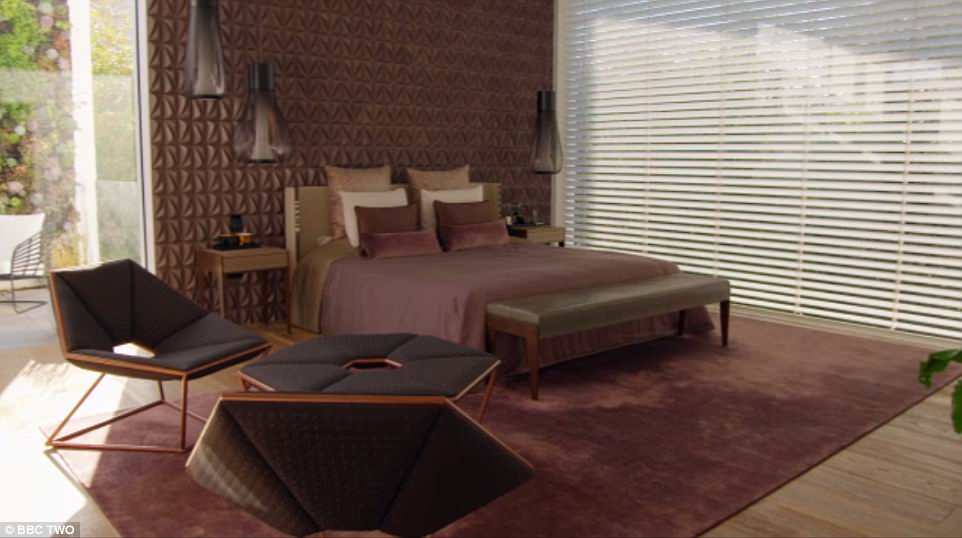 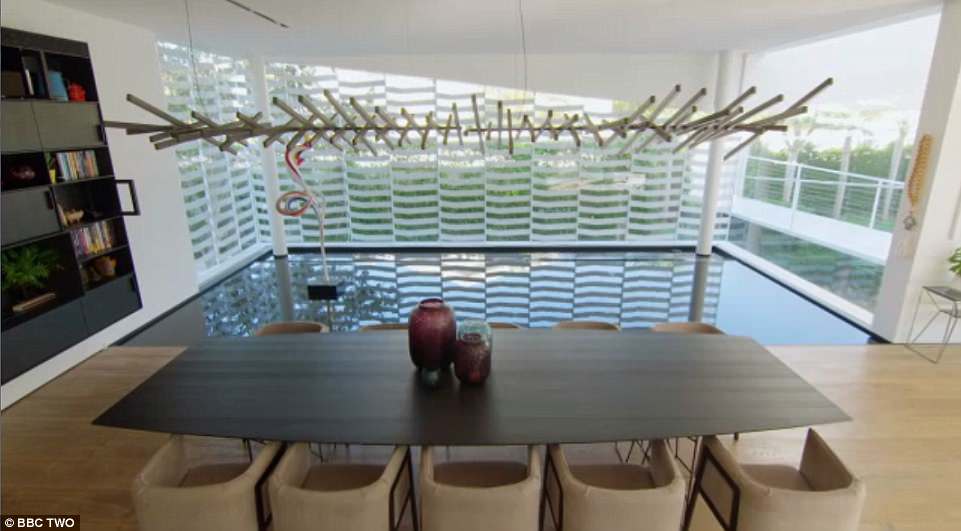 Architects wanted the home to reflect the differing personalities of the couple who live there, with both relaxed and eccentric features

Inside are three large en suite bedrooms, dressing rooms, bar area and a cinema room with a huge TV screen.

Architect Pitsou Kedem said he wanted the home to reflect the differing personalities of the couple who live there.

He explained: ‘When you design private houses it’s all about drawing a portrait of your client and I think the first thing that really distinguishes this house and the others is the client, they’re really different.

‘He’s a sitter. That’s in a way, Ossie is the dynamic shapes and the movement in the house and Steve is all the excellent places to sit. It’s drawing a portrait of different persons.’

3. RESIDENCE IN THE GALILEE 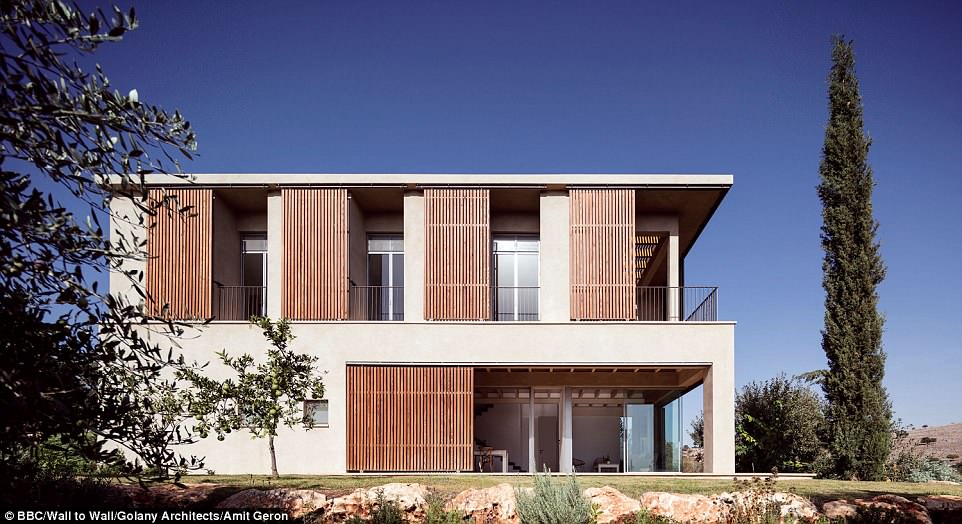 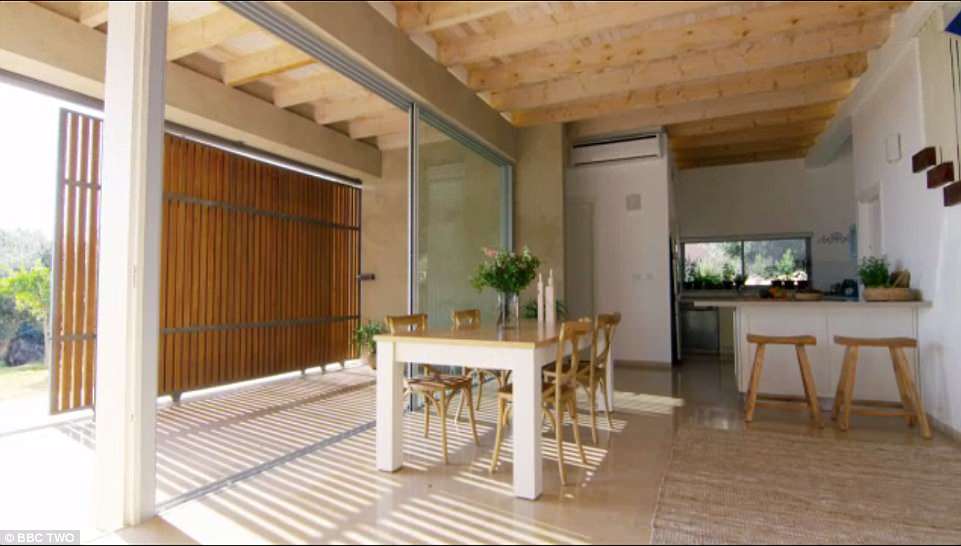 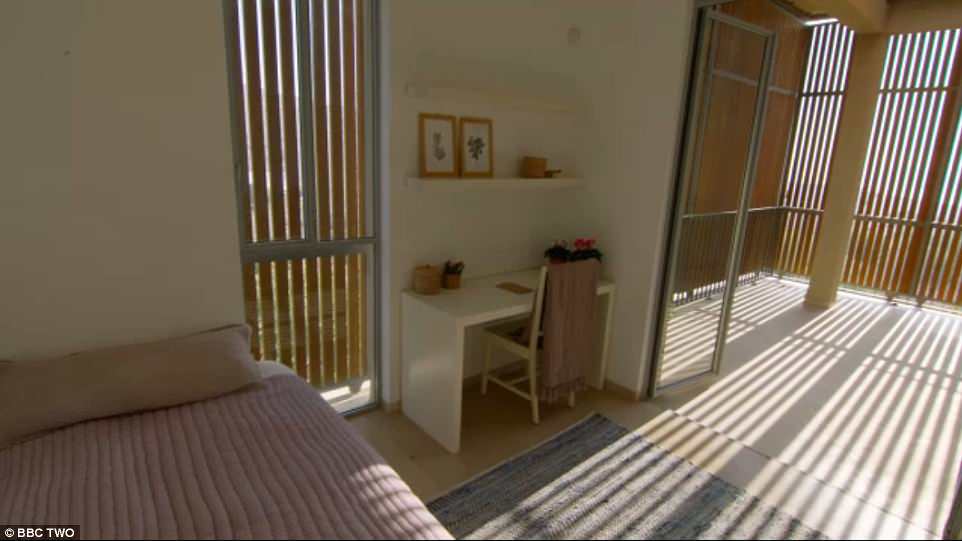 With panoramic views of the Sea of Galilee, stepping inside the aptly named Residence in the Galilee is almost like a spiritual experience in itself.

The area is home to some of the oldest residences in history, with the surrounding stone houses dating back thousands of years.

As architects had to build this property facing south to take in the views, the home is covered in wooden shutters that can slide and twist open to take in the light and breeze in the stifling summer months without it becoming overbearing.

There is a breezeway in the front of the house that blocks the brightness of the sun but takes the cool air into the open plan living and dining area. 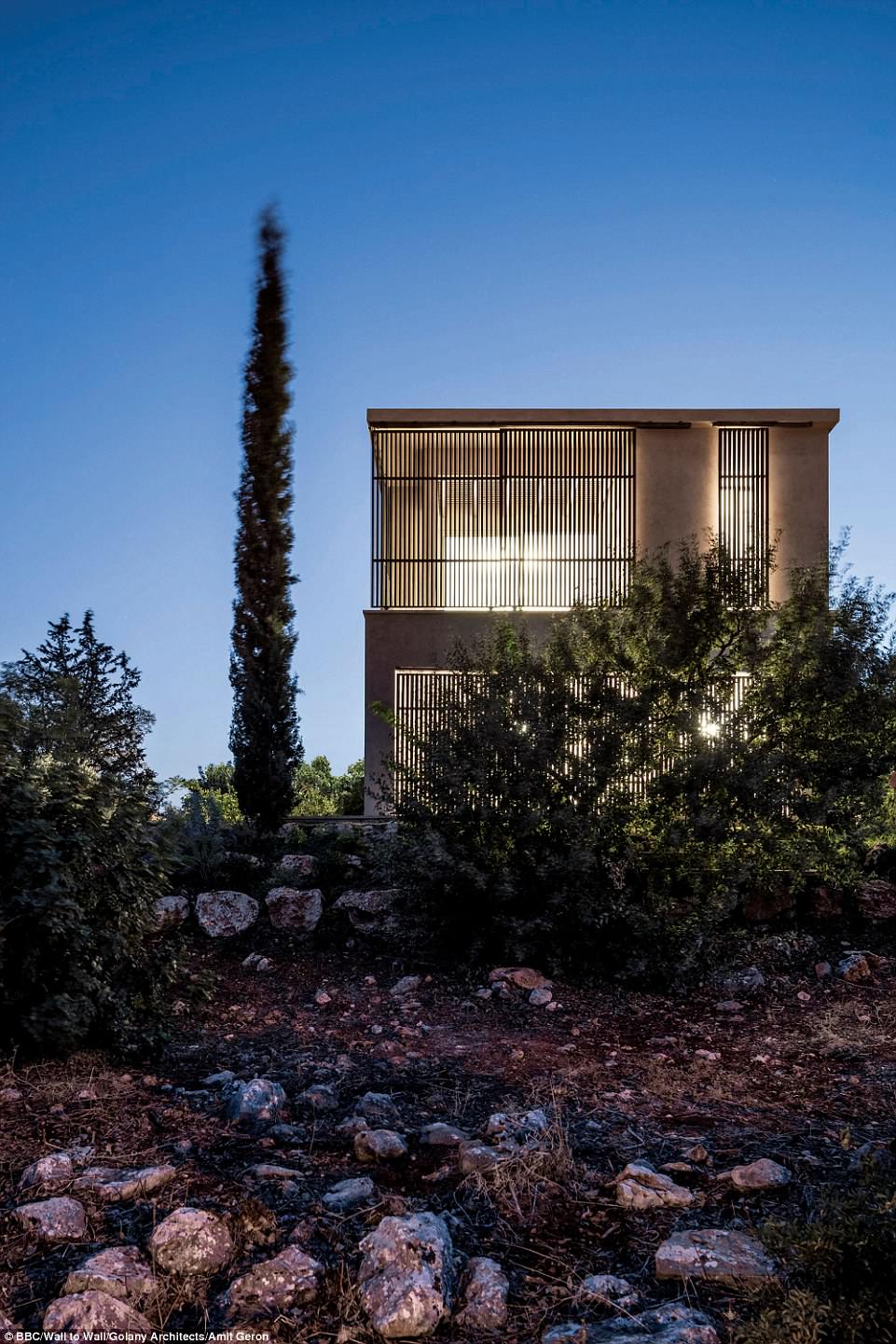 The shutters were deliberately designed to be the same colour as the surrounding limestone, allowing it to easily blend into the natural beauty that surrounds the home.

In designing the property, one of the architects climbed a ladder to see the lowest possible height they could build from that would give it its views without building too high on the hillside.

Upstairs there is one master bedroom and two children’s bedrooms, with an en suite guest bedroom and utility room also on offer. 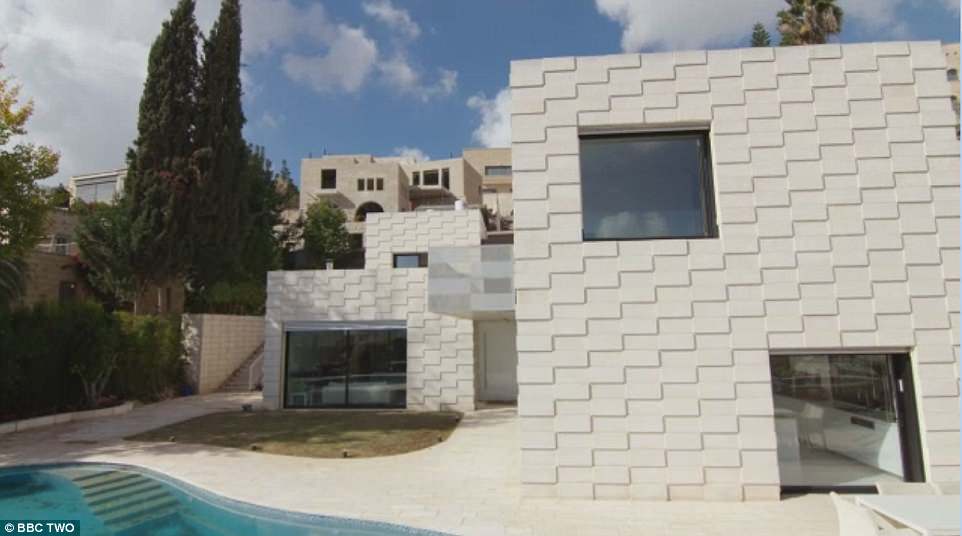 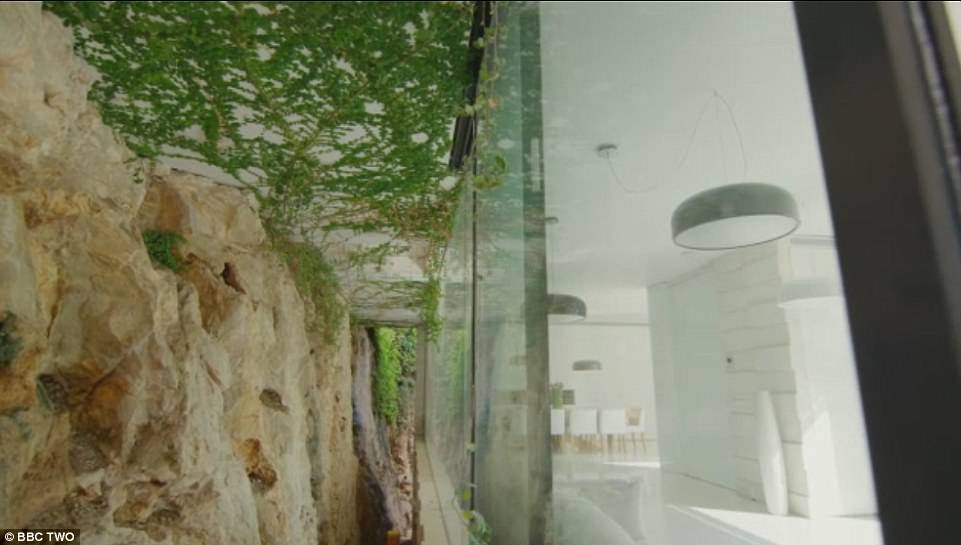 The Barud House in Jerusalem presented a difficult challenge to its architects as homes in the city all have to be made of the same limestone to preserve the aesthetic of the landscape.

They got around the rule by creating a stylish pattern from 5,000 white bricks, which also comply with the regulations because they were made from the stone.

Inside the interiors are made of a sleek glossy material that reflects the pattern of the brick in the sunlight, making the home look different every hour of the day depending on the changing position of the sun.

Because of the strict building regulations, the homeowners are not allowed to put art on the walls, and so they let the design become their artworks. 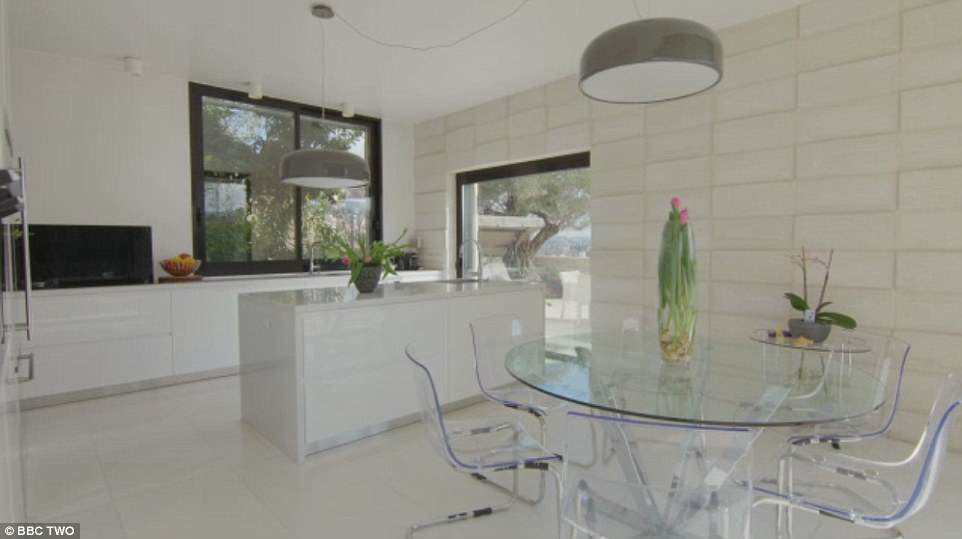 The glossy interiors and furnishings reflect the light from outside and the patterns of the stone, giving it a different design when the sun changes position 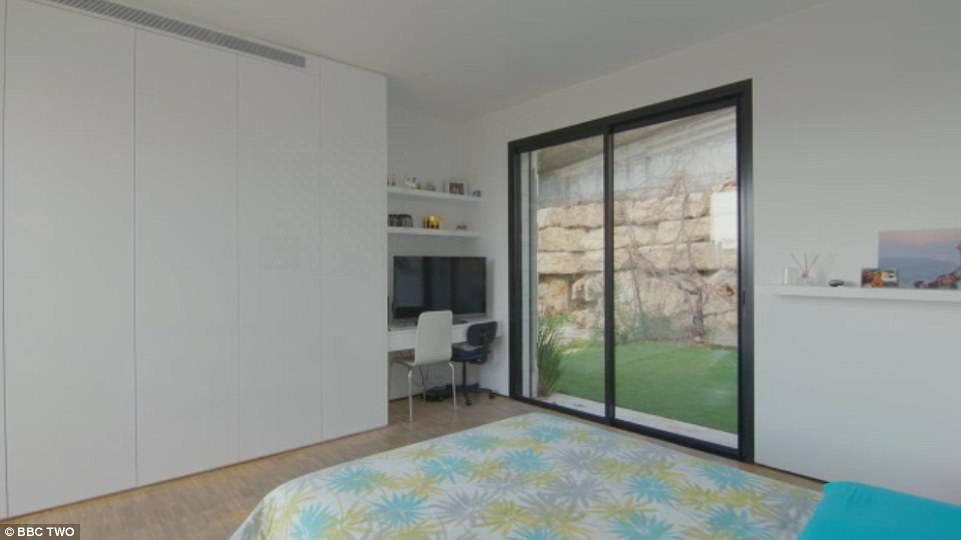 The homeowners are not allowed to put art on the walls to protect the stone, and so they let the design become their artwork

One of the most striking features of the property is the rock at the back of the house, which can be seen through the glass windows.

Explaining why they decided to keep it, architect Lilani said: ‘The impression we received when he arrived here was very strong because this old rock is very beautiful and the presence is very important, especially in a symbolic way for this city, because for this culture the stone is a very important issue.

‘It’s a strong presence and the heart and core of the house.’