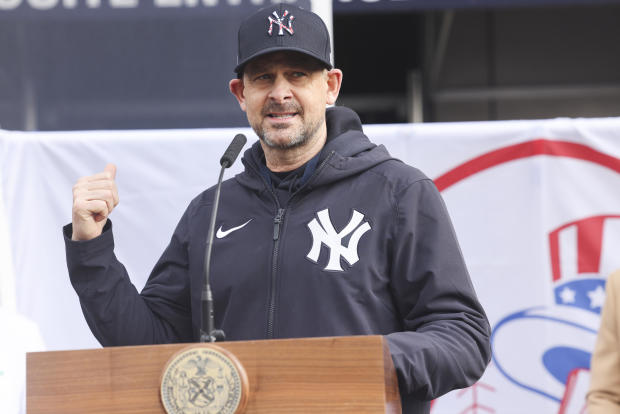 New York Yankees manager Aaron Boone announced Wednesday that he is taking an immediate medical leave of absence to receive a pacemaker. The procedure was performed Wednesday at St. Joseph’s hospital, and Boone is currently out surgery and recovering, the team announced.

“The procedure went as expected,” the Yankees tweeted.

Yankees bench coach Carlos Mendoza will take over for Boone until he returns.

Boone, who underwent open-heart surgery in 2009, said that over the past six to eight weeks he has experienced, “mild symptoms of lightheadedness, low energy and shortness of breath.”

“As a result, I underwent a series of tests and examinations in New York prior to the beginning of spring training, including multiple visits with a team of heart specialists,” Boone said in a statement Wednesday. “While the heart checkup came back normal, there were indications of a low heart rate which, after further consultations with doctors in Tampa, necessitates a pacemaker.”

Boone said the doctors feel the procedure “will allow me to resume all of my usual professional and personal activities and afford me a positive long-term health prognosis without having to change anything about my way of life.”

At a press conference Wednesday, Yankees general manager Brian Cashman said Boone had informed him of the situation “a few days ago.” Cashman said he told Boone to get the procedure done whenever is best for him, and that Boone informed him on Tuesday that the surgery was scheduled to take place Wednesday.

Cashman said that Boone was in a hospital bed for Wednesday’s daily Zoom meeting between the coaching staff and the Yankees’ front office, and he began the meeting explaining why he was there, as most people on the call were unaware of the situation. Cashman said Boone also prepared a video presentation from the hospital bed for the players.

According to Cashman, the timeframe for Boone’s return is fluid, but he said it, “could be as early as 48-72 hours, and if it takes later so be it.”

“All we care about is making sure he’s in a good place, first and foremost. That he’s healthy. That the pacemaker’s working properly,” Cashman said. “And that’s what the doctors will dictate and determine.”

“It sounds like it’s gonna be a short-term thing,” he said.

Cashman added that, while Boone is undergoing an outpatient procedure and is expected to recover fairly quickly, he would still have to go through COVID protocols to return to the team full-time.

Yankees owner Hal Steinbrenner said in a statement, “The thoughts of the entire organization are with Aaron and his family as he undergoes this procedure and takes the time he needs to properly heal.”

“Aaron leads our players, coaches and staff with a rare combination of work ethic, intelligence and a genuine concern for others,” Steinbrenner continued. “Our only priority at this time is Aaron’s health and well-being, and we will support him in every way throughout his recovery.”

Boone turns 48 next week and is set to begin his fourth season as Yankees manager. The team has made the playoffs each year Boone has been at the helm.