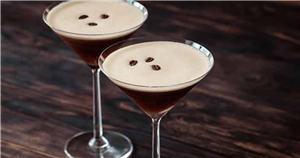 If you are partial to an espresso martini, then we may have just found your dream job.

The Bottle Club will be hiring a Cocktail Taster for three months, who will not only get plenty of free beverages but will also be paid for their work.

The alcohol company's mission is to find the best espresso martini in the country, and that's why you potentially come in handy.

The winning candidate will be tasked with marking the beverages against specific criteria. This includes the flavour and strength ratio, the appearance and garnish, the value for money and the quality of ingredients used.

Sadly all good things come to an end, so the taste test will only last three months.

Although, after three months of going to the fanciest cocktail bars you're probably going to crave some nights in.

In order to be in with a chance you need to do the short application, including why you think you'd be perfect for the job. Ermmm because you love cocktails?

The winner will even be gifted a few premixed cans to get the party started before leaving the front door.

You don't have to do it alone either – the company will also cover the cost of a friend's espresso martinis.

We imagine you'll suddenly become the most popular person when this perk is revealed.

The terms and condition are listed on the website but basically you have to be over 18 (durrr) and live in Mainland UK. Good luck!

There's another impressive job going – Her Majesty the Queen is hiring a new housekeeping assistant with a ‘competitive salary’.

Advertised on the Royal Household website, the opportunity is described as ‘working as a team to achieve exceptional results’.

Forget the standard hotel turndown service – you’re working for the Queen for 40 hours a week.

Judging from the advert, your job may not just be at Buckingham Palace.

The lucky applicant could be following the Queen as she moves from home to home.

For all the latest news, sign up to our daily newsletter here .