‘You could tell him anything’: Julia Zemiro shares her story with Costa

After being driven in fabulous retro cars by 60 famous Australians, 12 Britons, and Sam Neill, back to their childhood homes over nine seasons of ABC’s celebrity nostalgia series, Julia Zemiro’s Home Delivery, it’s the host’s turn.

At the end of this final, four-episode season – after she has stoked the memories of Ray Martin, Marcia Hines and Stephen Page – Julia Zemiro makes the journey back to the flat above her family’s former Bondi restaurant. Playing guest interviewer is Gardening Australia’s Costa Georgiadis, with whom Zemiro shares several life experiences. 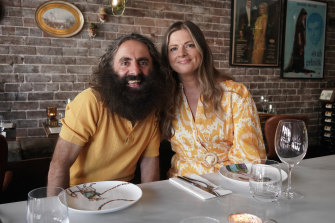 Costa Georgiadis and Julia Zemiro team up for an episode of Home Delivery.Credit:ABC

“Costa and I are the same age and we both grew up in Bondi. He’s Greek and I’m French. I thought he would understand me and that journey and that place. Also, when we did his episode (in 2019), his father had recently died. When we did my episode, my dad had recently died, and I felt safe with him. He’s a beautiful man. You could tell him anything.”

Having witnessed so many people in such deeply personal moments, Zemiro was as prepared as she could be. She knows full well it is an emotional minefield.

In previous episodes, Sam Neill and Rebecca Gibney confronted their difficult relationships with their fathers. Greg Pickhaver (aka H.G. Nelson) spoke of loathing his home town of Adelaide. Alan Brough’s relief after the final take was palpable. The Hoodoo Gurus’ Dave Faulkner teared up remembering his beloved dad.

“If they’re good memories, you’re thankful,” says Zemiro. “If they’re bad memories … look, you’ve got to face difficult stuff. I think people are reflective, and I think most of our guests have been over the age of 40. When you’re over 40, you’ve done a bit of work on yourself, and you’ve learnt a few things.” 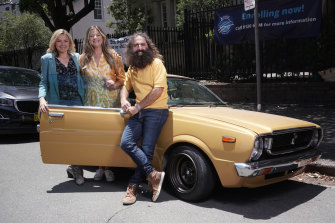 Justine Clarke with Zemiro and Georgiadis, in front of the gold Toyota Corolla.Credit:ABC

The definition of “home” broadened at times, so that in 2018, Germaine Greer could revisit Cambridge in the UK, where she felt her life began, rather than her native Melbourne. This season, Boston-born Marcia Hines’ “home” is in Sydney, where she moved at the age of 16 to perform in the musical, Hair.

Along with Costa, three other guest hosts take Zemiro to significant places of her formative years. Francophile Mark Humphries walks her through her old primary school, where she attended a French language stream. Judith Lucy is by her side at the Victorian College of the Arts, jokingly claiming revenge because she wasn’t accepted into the acting course. And it’s Justine Clarke who not only takes Zemiro back to the high school they both attended, but is in the driver’s seat of a gold Toyota Corolla.

“I can’t drive a manual,” Zemiro admits. “I didn’t start driving until I was 35. I can drive an automatic, but a lot of our old cars obviously are manual. We couldn’t get a red Toyota Corolla, unfortunately, but it was great.

“I have very strong memories of my mum driving that car when she was at her absolute peak in her 40s. Just cool, teaching, wearing amazing clothes, and Justine happened to have these amazing boots on, and as I was looking at her feet driving, I thought: ‘Yep, that’s mum.’ Cars are fantastic that way. They really bring so much back.”

As she prepares to film the second season of Kitty Flanagan’s ABC sitcom, Fisk, Zemiro reflects on the momentous learning curve that was Home Delivery.

“You can ask anybody the story of their life in a studio. But when you get to where it all happened, they remember so much more. They see things in corners, behind buildings … I think people will always be interested in hearing people talk honestly about how they feel and about their lives, and how places are important.

“I encourage everybody to do their own little Home Delivery. Our past is always with us, but it’s how you deal with it and how you speak about it that can help you through.”