Zara Tindall reveals she ‘doesn’t enjoy shopping’ or have a stylist and says Princess Anne taught her the key to fashion is to look ‘presentable, clean and tidy’

Zara Tindall has revealed she ‘doesn’t enjoy shopping’ and says key fashion lessons from her mother Princess Anne were to be ‘presentable, clean and tidy’.

The mother-of-two, 38, made the admission while discussing her ‘very, very casual’ style, and says while at home with the children Mia, five, and Lena, one, she feels most comfortable in jeans and trainers.

While other members of the royal family including Kate Middleton, 37, and Meghan Markle, 38, have bespoke pieces made for them by high-end designer brands, Zara said she does most of her shopping online.

She told The Telegraph her key fashion lessons have come from Princess Anne, 69, saying: ‘Through the years, whenever going to an occasion, the main lesson that my mother taught us was just to make sure that you look presentable, clean and tidy.’ 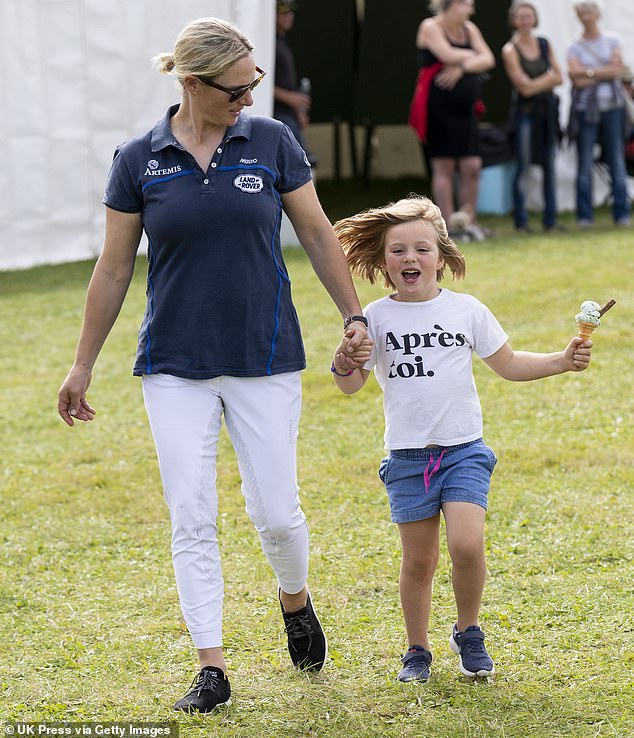 Zara Tindall, 38, admitted she ‘doesn’t enjoy shopping’ and doesn’t have a stylist while discussing her ‘very, very casual style’ (pictured with daughter Mia in September) 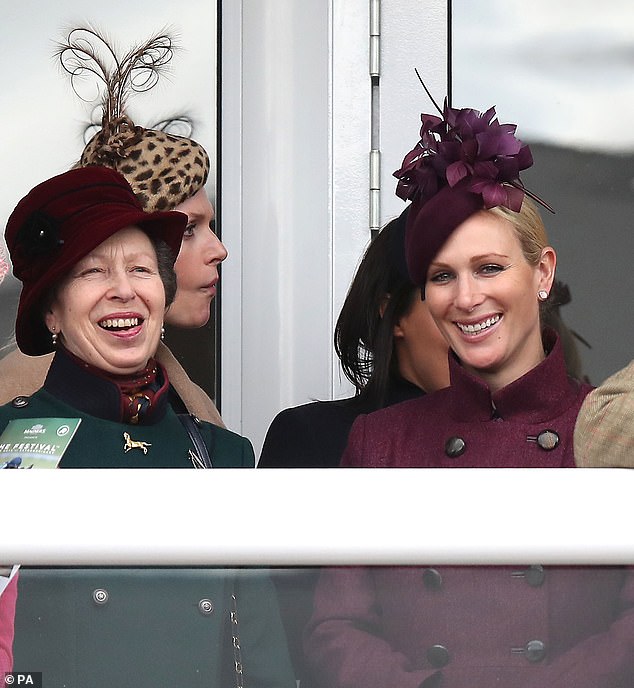 The royal said her mother Princess Anne, 69, had taught her key fashion lessons including looking ‘presentable, clean and tidy.’ (pictured, together in March)

Admitting she ‘doesn’t have’ a favourite designer or a stylist, the mother-of-two said she is most comfortable wearing stretchy skinny jeans, which she often wears at home with the family.

Rather than shopping on the high street or ordering bespoke pieces, she’s more of an online shopper ‘when needs must.’

Despite the admission, the Queen’s granddaughter is known for looking polished and well dressed at royal events.

She was snapped yesterday wearing a navy shirt dress costing £446 from High for the Queen’s annual Christmas lunch. 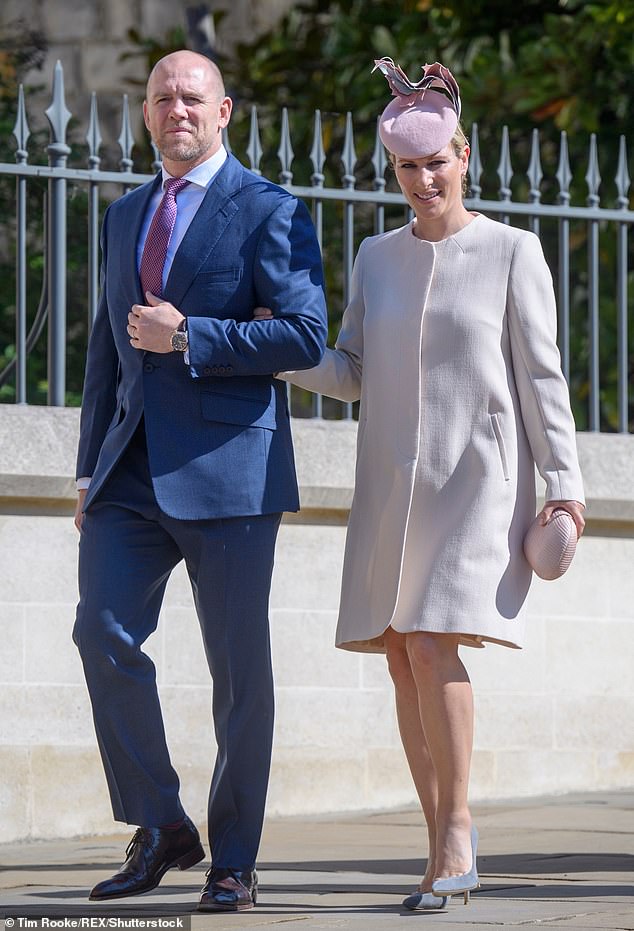 Despite her love of dressing down, the royal often looks effortlessly polished and chic while attending royal events (pictured at the Easter Sunday service in Windsor in April)

And in April, she donned a stylish nude wool-blend Redgrave coat from Goat for the Easter Sunday service, which she teamed with a pale pink felt cocktail hat by Sarah Cant.

Zara went on to reveal that organising wardrobes for her daughters is ‘a nightmare’ because ‘they grow out of things so quickly’.

The down-to-earth royal added: ‘It’s a little bit depressing when you realise how quickly they’re growing.’

With two young daughters, and three different equestrian disciplines, as well as husband Mike’s clothing, Zara suggested there is ‘a lot going on’ in the laundry room in her house. 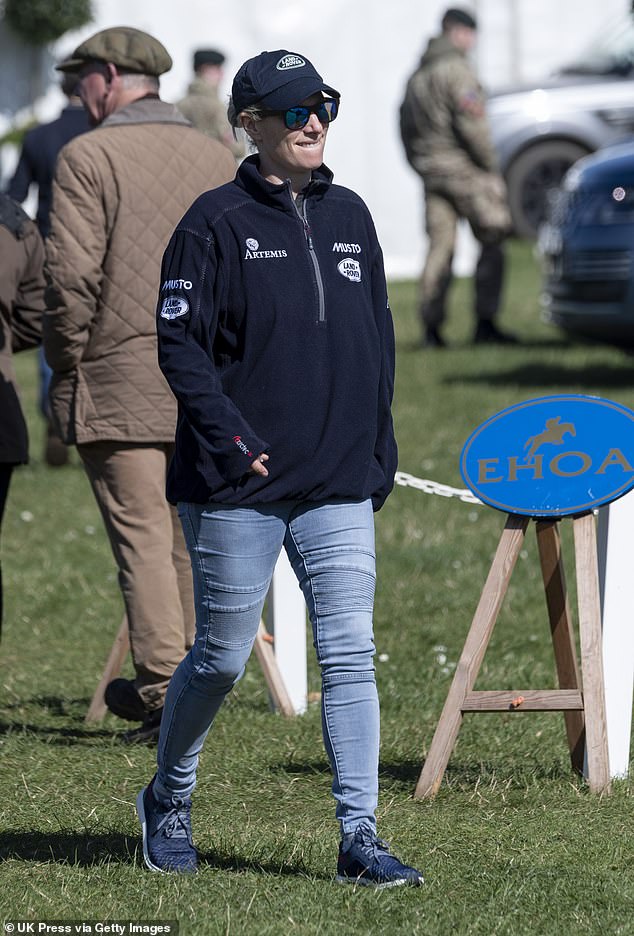 Zara said she feels most comfortable when wearing her stretchy skinny jeans, and often wears ‘trainers and jumpers’ while at home with her children 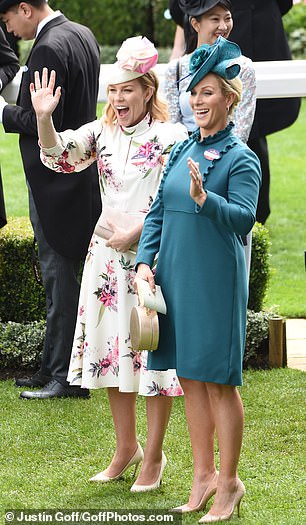 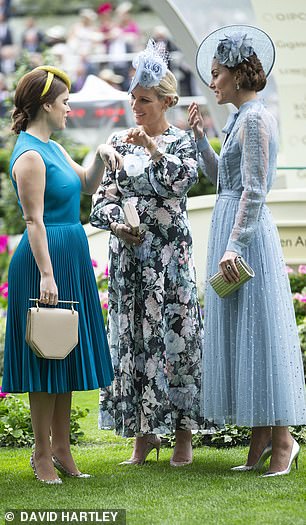 The royal, who often attends Ascot with other members of the royal family, said she ‘doesn’t have’ a favourite designer (pictured left, at Ladies Day in June, and right, on day one of Royal Ascot at Ascot Racecourse)

Despite seemingly not caring about fashion, Zara admitted she had always dreamed of having a walk-in wardrobe.

She said it had been ‘a must’ when she and Mike moved house to the Gatcombe estate parklands.

The royal is said to have a low-key approach to staff, and until recently were believed to have gone against traditional by not hiring a nanny to help with their children.

But as they arrived at the Queen’s Christmas lunch yesterday there was an unfamiliar face in the backseat of the couple’s car, believed to be their nanny. 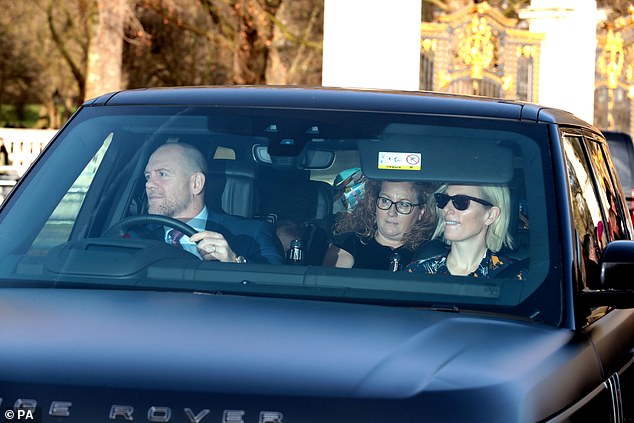 The royal wore a chic navy shirt dress while attending the Queen’s Christmas Lunch yesterday with her family (pictured, with husband Mike)