Doctor Who is the world’s longest-running science-fiction show, so it’s no surprise that the odd familiar face pops up now and again. The universe is a surprisingly small place.

Faces from the past return to haunt/excite the Doctor and, on more than occasion, it’s the Doctor’s *own* face. You know, time-wimey and all that.

Over the years, many actors and actresses have returned to play much-loved roles in the show and you might be shocked to see just how long some these people left it. You think that John Simm coming back to play The Master after 7 years away was impressive? Think again.

Now, it should be noted, we’re not considering video games, fan projects or audio adventures. We’re just looking at the televisual worlds of Doctor Who. 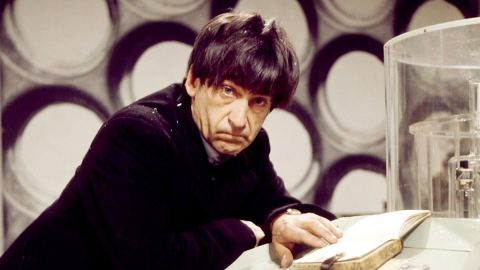 The old Troutster, as he’s known, returned on more than once occasion to Doctor Who.

After he left the role of Dr Two in 1969, Patrick returned for ‘The Three Doctors’ at the end of 1972 and then again, over a decade later, in ‘The Five Doctors’. And just a few years later again, Troughton teamed up with Sixth Doctor Colin Baker for ‘The Two Doctors’. 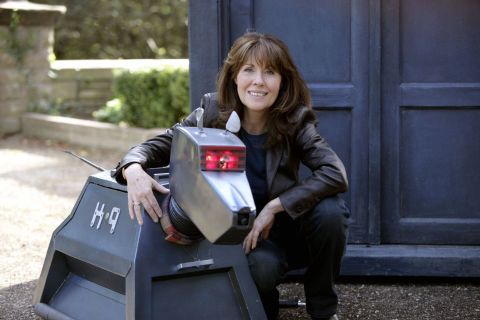 Everybody’s favourite tin dog has also had numerous returns after his initial departure from the show and has a suitably barking mad timeline. But let’s play safe and go for the mechanical mutt’s final appearance in the 1993 Children In Need “story”, ‘Dimensions In Time’ and its return in 2006’s ‘School Reunion’.

(If we were pedantic about this, then we would say the gap is 31 years: that’s the gap from when K9 Mark I left in 1978’s ‘The Invasion Of Time’ and then returned in the Australian spin-off series K9 in 2009, and voiced by Leeson. But we won’t.)

It’s more straightforward for plucky journo Sarah Jane. She had already appeared in the first Doctor Who spin-off K9 & Company before her first return in the 30th anniversary special. Sladen reprised the role once more for ‘Dimensions In Time’ but it was well over a decade when she made a glorious return in the Tenth Doctor tale ‘School Reunion’, along with K9. 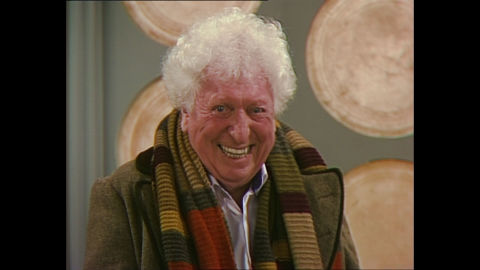 Now, we have a couple of provisos for the more ardent Whovians when it comes to the Doctor with the most eps. Tommy B left in March 1981 and returned for ‘Dimensions In Time’.

Some of you might be saying the Fourth Doctor appeared in 1983’s ‘The Five Doctors’. BUT, Baker didn’t actually reprise the role in this instance as the footage was from the abandoned 1979 adventure, ‘Shada’. So it doesn’t count. Also, while we’re talking about ‘Shada’, Tom did reprise his role for the 2017 DVD release, some 24 years after – but this wasn’t telly, so we’re not counting that either. 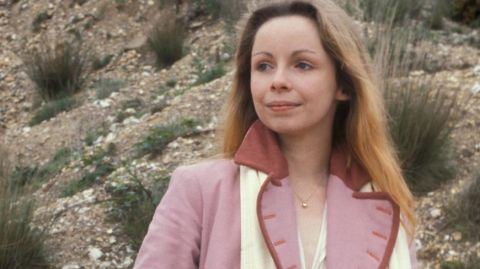 Lalla left Who to join one of the show’s greatest monsters (Tom Baker’s words, not ours). Ward played the second incarnation of Time Lady (or is it Time Dame?), Romanadvoratrelundar, and departed at the beginning of 1981 in the brilliant but mind-melting ‘Warriors’ Gate’.

She returned almost thirteen years later for the less-than-brilliant but equally mind-melting ‘Dimensions In Time’.

Liz was the first companion of the colour era and of Jon Pertwee’s Third Doctor. The UNIT scientist only hung around for one season (but WHAT a season!) and gave a brief turn in the 20th anniversary epic, ‘The Five Doctors’.

We should point out, however, this was but an illusion (still counts though!).

Like so many other Who stars, Davison made the mistake of returning to the role for ‘Dimensions In Time’. Coincidentally, his next appearance as Dr 5ive would also be as part of Children In Need, for the 2007 special ‘Time Crash’.

Co-starring David Tennant as the Tenth Doctor and written by Steven Moffat, Peter’s return was both glorious and hilarious. It was like he’d never been away.

Troughton’s wonderful double act left in the final year of the ’60s, missed out the ’70s and came back for ‘The Five Doctors’ in 1983.

Like Liz Shaw above, their appearances were phantoms caused by Rassilon (you can get a pill for that now).

Clocking up over 20 appearances in the show’s classic run, the Brig is a bonafide Who legend.

He returned, as many did, for ‘Dimensions In Time’ and then again almost exactly 15 years later for The Sarah Jane Adventures story, ‘Enemy of the Bane’ in 2008 (a replacement for companion Martha Jones when actress Freema Agyeman couldn’t make it).

Leather-clad warrior Leela’s departure was a fudged affair – leaving the Fourth Doctor in ‘The Invasion of Time’ (1978) to hook up with a guy she barely knew on Gallifrey. Not a fitting end for such a bold character.

Jameson, wearing more clothes, was seen once again in ‘Dimensions In Time’.

1985 was all about the past when it came to Doctor Who. More specifically, continuity. And to appease fans in the Sixth Doctor era, producer John Nathan-Turner not only brought back the Cybermen (in a canon-heavy story), he needlessly brought back the man who originally played the role of Cyber Controller in the Second Doctor classic, ‘The Tomb of the Cybermen’.

In between, Kilgraff made more “appearances” in Who – as an Ogron in the Jon Pertwee era and as the giant robot in Tom Baker’s very first story. 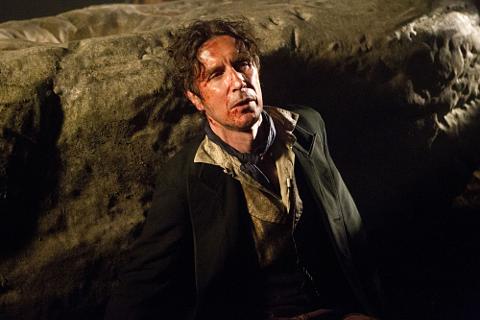 For one night only, McGann shone as the Time Lord in the 1996 TV Movie, almost seven years after the show’s cancellation (well, not cancelled as such, they just stopped making it).

Sadly, this didn’t lead to more outings for McGann’s gorgeous Doctor with cancellation hitting again. It would take the 50th anniversary for the Eighth Doctor to come back. And he did so in the Steven Moffat-penned mini-ep, ‘The Night of the Doctor’. 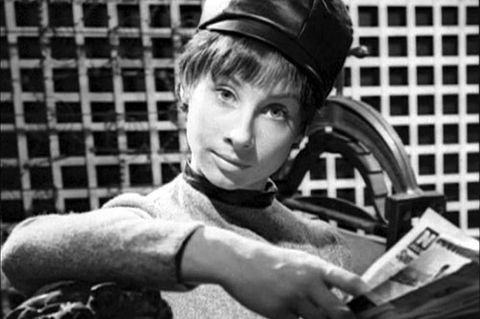 Who‘s first companion, and a Time Lady to boot. The Doctor’s granddaughter left, or was abandoned rather, on Earth at the denouement of 1964’s ‘The Dalek Invasion of Earth’. She was reunited with her grandfather nearly 20 years later in ‘The Five Doctors’.

Sadly, Ford hasn’t appeared in the show post-2005 but did make a cameo in Mark Gatiss’ An Adventure in Space and Time and a picture of Susan could be seen on the Doctor’s university desktop in Peter Capaldi’s final series as the Twelfth Doctor. 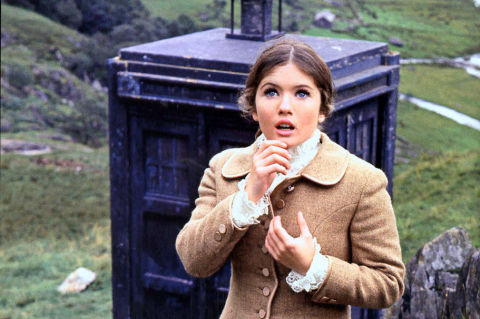 Sometimes affectionately known as “leather lungs” (a term Watling used herself), Victoria screamed her way out of the show in 1968’s ‘Fury From The Deep’.

Over two decades later and fans could enjoy Miss Waterfield once more, if briefly, in ‘Dimensions In Time’ where she delivered the immortal line, “Who was that terrible woman?” 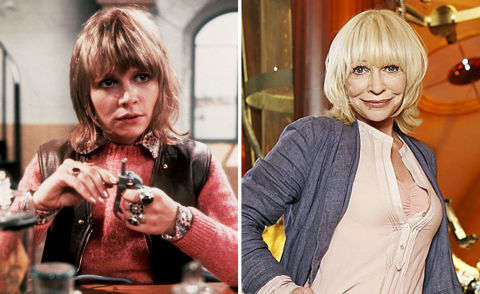 One of the show’s most popular classic companions, it was an emotional farewell for Jo Grant as she went to off to get married and explore the Amazon with her new husband Cliff Jones. It clearly had an impact on Jon Pertwee’s Third Doctor, who wouldn’t hang around to see them off.

Manning sat out all the multi-Doctor and companion specials mentioned above but did make a special exception for a team-up with the companion who succeeded her, Sarah Jane Smith. Now Jo Jones, she met up with Matt Smith’s Eleventh Doctor in The Sarah Jane Adventures outing ‘Death of the Doctor’ in 2010.

Recently, Digital Spy revealed that Manning would be reprising the role for the new Doctor Who Infinity game. 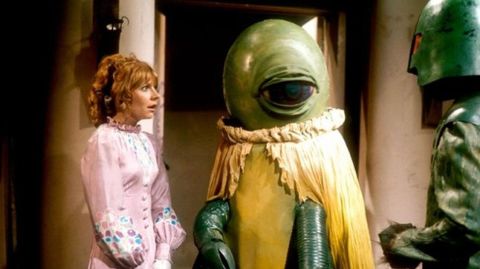 Four decades – yes FOUR DECADES! – after her second appearance as a Galactic Federation delegate in ‘The Monster of Peladon’ (sequel to 1972’s ‘The Curse of Peladon’), Churchman reprised the role of Alpha Centauri in the Twelfth Doctor ep, ‘Empress Of Mars’.

Ysanne made her return at the sprightly age of 92 years old. Written by Mark Gatiss, the surprise cameo came at the end of an ep featuring the Ice Warriors, a race also featured in the Peladon stories.