The explosively climactic end of Avengers: Infinity War left us with plenty of food for thought, as well as establishing that its as-yet-untitled sequel will be the most hyped movie of all time.

Ending on a cliffhanger as it did, it’s no surprise that Avengers 4 has become the subject of endless theories and rumours. But not all speculation is created equal – here are some extreme flights of fancy that there’s no way will ever happen*.

1. The X-Men will be introduced to the MCU

The theory: Some major news that will have been playing on Marvel fans’ minds is Disney attempt to acquire Fox – and thus bring the film rights to the X-Men and Fantastic Four under the same roof as the MCU. There are even rumours that the movie will be called ‘Avengers: Heroes Reborn’ (relating to a ’90s comic-book event reuniting Marvel’s mutants with the Avengers and other heroes that had been trapped in a parallel world), and that it will somehow lay the groundwork for the merging of the two franchises.

The reality: While Disney is the favourite to acquire Fox, this still hasn’t been finalised, and Marvel Studios president Kevin Feige and various other honchos have made it clear that planning for a potential future where Avengers meet mutants is not high on their list. If the X-Men and Avengers are brought together, it won’t be rushed like this.

The theory: Doctor Strange traded the Time Stone for Tony Stark’s life, because his master plan for stopping Thanos involves Iron Man temporarily replacing him as the Sorcerer Supreme.

The reality: This theory is based on an image of Robert Downey Jr wearing the Cloak of Levitation on the set of Infinity War/Avengers 4. Even if Downey wasn’t just clowning around, the cloak is known for having a life of its own, flying about and wrapping itself around people, so it hardly means that Tony has swapped science for magic.

No one has been officially named the Sorcerer Supreme following The Ancient One’s death and, even if Strange is gone forever, Wong is a far likelier candidate than the complete untrained (and doubtlessly sceptical) Iron Man. There’s just no evidence for this. 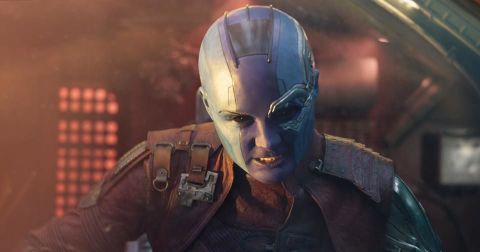 The theory: In The Infinity Gauntlet – the comic that forms the basis of Avengers: Infinity War – Thanos’s daughter Nebula steals the Infinity Stones from her dear old dad, forcing our heroes to battle her instead. Avengers 4 will follow the comics’ lead, and sees her torture at the hands of Thanos and the murder of her sister Gamora leading her down the road to evil.

The reality: If you think Nebula is going to do a heel-turn at this point, you haven’t been paying attention to the journey of Karen Gillan’s character. Since Guardians of the Galaxy, she has been on a redemption arc, with Gamora slowly coming to understand the ways she failed her sister. Making her bad again would totally ignore everything that had come before. Not happening.

4. Thanos’s son will make an appearance 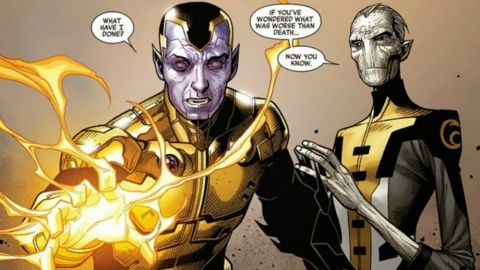 The theory: As well as The Infinity Gauntlet, Infinity War also drew heavily from the comic Infinity (are you confused yet?), mainly in the inclusion of Thanos’s servants, the Black Order. Another character that comic introduced was Thane, the biological son of Thanos with an unknown Inhuman who had no idea who his father was. The answer to defeating Thanos in Avengers 4 lies with Thane, the only person who will be able to match his power.

The reality: The answer to defeating Thanos (if another battle with the Titan is even on the cards) is far more likely to lie with Brie Larson’s Captain Marvel, who will be “the most powerful character in the MCU”. Whereas she has already been seeded in Infinity War – and will get her own solo movie before Avengers 4 – Thane would come completely out of the blue.

Is Marvel likely to cut into what will likely be Iron Man and Captain America’s swan song to introduce a skinny purple Thanos clone we’ve never heard of before? We don’t think so.

5. There is a seventh Infinity Stone

The theory: The Avengers will hunt down the secret seventh Infinity Stone in order to undo Thanos’s actions.

The reality: There is precedent for extra Infinity Stones, including the ‘Ego Gem’ from a Marvel crossover of questionable canonicity, and…uh… a ‘Build Stone’ in the luxuriously titled Lego Marvel Super Heroes – Guardians of the Galaxy: The Thanos Threat video game. But traditionally there have always be six stones, and the six have always been enough to grant the wielder absolute power of reality.

There is no evidence that a seventh Infinity Stone is lurking in the MCU and, to be honest, the past ten years of movies have well and truly done the discovering-and-collecting-Infinity-Stone narrative to death. Avengers 4 needs to break new ground rather than looking back.

6. The Spider-Man in Infinity War was from the future

The theory: The Spider-Man who travels into space with Iron Man and Doctor Strange in Infinity War is from the future (the younger version fell off Ebony Maw’s ship and returned to Earth). He says, “I don’t want to go,” to Iron Man after the Infinity Snap because, being from the future, he knows that all the victims of the Infinity Gauntlet are being sent into another dimension – which will play out in Avengers 4.

The reality: The theory is based on a misquote. Some fans thought that, when Spider-Man meets up with Iron Man early in the film, he explains his presence by saying, “I’m from the future,” when his actual words were, “Field trip to MoMA.” The whole crazy theory spirals out from there, and what a spiral it is.

7. All the heroes will stay dead

The theory: Screenwriters Christopher Markus and Stephen McFeely have insisted that the deaths in Infinity War are “real”, leading to theories that all those heroes really are dead. That would be even more shocking than killing them off in the first place, and set the stage for a very different MCU.

The reality: There is extensive evidence that the heroes will return. Dave Bautista has promised that Drax is back, Tom Holland is already shooting his post-Avengers 4 movie Spider-Man: Far from Home, Doctor Strange 2 is in the works, and that’s just for starters.

The heroes will be back in Avengers 4. Whether that means they’ll all survive until the end of the movie is another question entirely…

*Digital Spy reserves the right to be proven totally wrong on all or any of these accounts.