It’s been too long since we last saw the ladies of HBO’s sketch comedy series “A Black Lady Sketch Show,” and, as you might know, a lot has changed since September 2019. But creator Robin Thede and her team remain the best at exploring the mundane and obnoxious things women, specifically Black women, put up with.

In Season 2, “A Black Lady Sketch Show” once again delivers hilarity and absurdity in equal measure. It’s the end of the world when the series starts and we meet Robin (Thede) and her friends celebrating the literal end of the world. But when Robin passes out and wakes up in a whole new location — same apocalypse — it leads her to question the surrounding women.

This running gag takes up a significant portion of each episode and it’s unclear what the intent is — short of possibly being an allowance for new COVID protocols limiting people on-set. There’s commonalities to when “Key and Peele” did their roadtrip storyline, and the ongoing joke here is just as fun here because Thede, Gabrielle Dennis, Ashley Nicole Black, Skye Townsend, and Laci Mosley have such fantastic chemistry.

As they navigate being the last five women on Earth it causes them to snipe at each other, whether that’s trying to decide who’s president of the new world to thinking Townsend has ulterior motives. The season ends with the implication this narrative will expand in the next season — and it’ll be interesting to see how the team creates a payoff for this in a sketch show.

There are a few sketches brought back from Season 1 that emphasize just why they were so popular in the first place. A return to the “Black Lady Courtroom” sees special guest Yvette Nicole Brown reprise her role as judge. As the women come back they start to wonder if the legend of an all-Black woman court can ever be achieved again…until an all Black woman jury shows up.

This short takes on an added reverence considering current events, and the fact that the script revels in the joy of seeing so many Black women in the court (only to be brought down by a Black male lawyer) reminds audiences of why this show is so significant in the topics it picks. Like an all Black woman jury, you don’t realize how important something is until you see it manifested onscreen.

Another returning short involves the Coral Reef gang who offer members excellent benefits and a 401K, but if they step out of line they’ll get killed. This time around we see them going on what passes for a corporate retreat, where every threat of violence ends up being something amazing like a massage. This sketch continues to work so well because of the comedic talents of Dennis. She might not seem like an intimidating presence, but she makes the leader of the Reefs intense yet heartfelt. 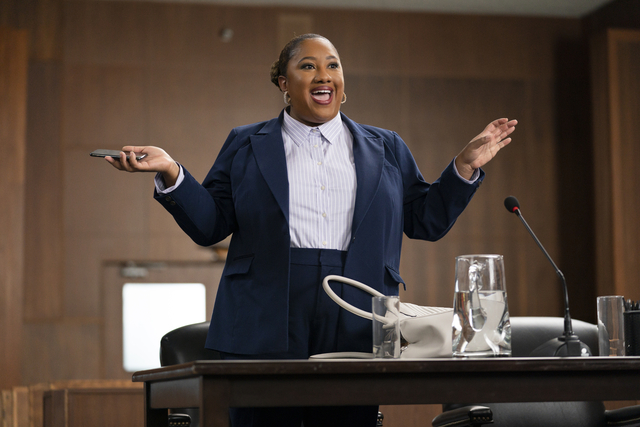 And Thede also brings back her character of Dr. Hadassah Olayinka Ali-Youngman, an academic whose Black history comes off as reductive and overbearing. She gets the first sketch of the season, complete with “Spike Lee dolly shot,” that will make you see that even a pandemic can’t stop her from speaking what she believes is the truth. Dr. Hadassah comes back in a later episode for “Black Table Talk” with actress Gabrielle Union that culminates in Union having to shamefully confess she can read and apologizing to a cardboard cutout of husband Dwyane Wade.

Some of the best sketches this season are the weirder ones, such as one involving a group of friends visiting a resort only to meet one woman (played by Thede) they don’t recognize. Like the dueling versions of Robin’s end of the world party in the running gag, there’s an emphasis on duality this season that’s a lot of fun.

Black, like Thede, is a writer as well as actress on the series, and she walks away with some of the best sketches. One involving her wearing of a presumably vintage jumpsuit ends as a poignant discussion of how larger Black women are often left struggling to find clothes, so of course they all end up wearing the same cute outfit. Black has such an expressive way of delivering a turn of phrase, so even in a sketch wherein she takes a friend to a self-help seminar that’s actually a trip to Hell, the weirdness is cut by how Black deadpans that she doesn’t have to go to her friend’s wedding.

And that’s illustrates the pure fun of “A Black Lady Sketch Show,” that a sketch can be weird or embarrassing and the strength of the performers makes it relatable. Not every sketch lands perfectly — and nothing comes close to “The Basic Ball from Season 1 — but the good far outweigh the bad.

Season 2 of “A Black Lady Sketch Show” premieres on April 23 on HBO.