‘Always Be My Maybe’: Ali Wong and Randall Park on Their Fresh Take on ‘When Harry Met Sally’

Halfway through Ali Wong’s interview with IndieWire to discuss her writing, producing, and starring in Netflix’s rom-com “Always Be My Maybe,” she discovers that this reporter is Vietnamese.

“Girl, why didn’t you start there?” said Wong, who is of half-Chinese, half-Vietnamese descent. “My dress last night [at the movie’s premiere]… is by a Vietnamese designer named Thai Nguyen. He dressed Kelly [Marie Tran] for the ‘Star Wars’ premiere. He’s awesome; his specialty is áo dài. He dresses all of ‘Paris By Night,’ for the most part.”

Wong drops a few more Vietnamese-American touchstones to complete the bonding experience. It’s the kind of instant, excited identification that occurs between strangers who share a background from a smaller community — like finding out a rideshare driver attended your high school. It’s also the kind of unapologetic hyper-specificity that Wong and Randall Park bring to “Always Be My Maybe.”

After a casual comment Wong made three years ago in an interview about how she and Park wanted to write their version of “When Harry Met Sally,” an ardent fan campaign to have the movie made emerged online. Fresh off of Wong’s success with her first Netflix stand-up special “Baby Cobra,” the streamer jumped at the chance at another collaboration.

Park and Wong are longtime friends since she had joined LCC, an Asian-American theater group at UCLA that Park had founded with Michael Golamco and others. Wong had learned to craft narratives from writing on Park’s ABC sitcom “Fresh Off the Boat,” a gig that he recommended her for, but neither had written a rom-com before and relied on their comedic instincts. “There was no Rom-Com 101. Who has time for that?” she said. “Randall’s got a kid. I have two kids. We don’t have time to be studying or anything. We just did it.”

“We wanted to have two friends from childhood, who in their adulthood had grown apart,” said Park. “We decided to make Sasha Tran (Wong) a very successful chef in Los Angeles. It made sense, based on our authentic experience, for Marcus Kim (Park) to be still in San Francisco [where they grew up], performing with his band, and not necessarily a success, but happy. The whole process was kind of organic.” “Always Be My Maybe”

They also brought in Golamco to co-write the script and former “Fresh Off the Boat” showrunner Nahnatchka Khan to direct and consult on the story.

“I love ‘When Harry Met Sally.’ What I really appreciated is the two-handedness of it. It was equally weighted 50 and 50,” said Khan. “You care about Harry and you care about Sally and that was important in this story where I wanted you to be invested in both these characters. I didn’t want one of them to overtake the other. So that was something that we looked at as like a touchstone.

“We know people like this, like Randall’s character Marcus who is very talented but sort of stuck and still living in his childhood home,” she continued. “He’s great at what he does, but you’re always a little frustrated with him. ‘You could be so great. You could get so much more.’ And they just, for whatever reason, aren’t interested. Then Ali’s character Sasha — we know a lot of successful women and you can be ambitious and also insecure at the same time. You can be vulnerable and driven so it was important for us to nuance.”

Sasha and Marcus reconnect when she returns to her hometown to open a new restaurant. She is recently single after her business-minded boyfriend Brandon Choi (Daniel Dae Kim) dumps her by phone. 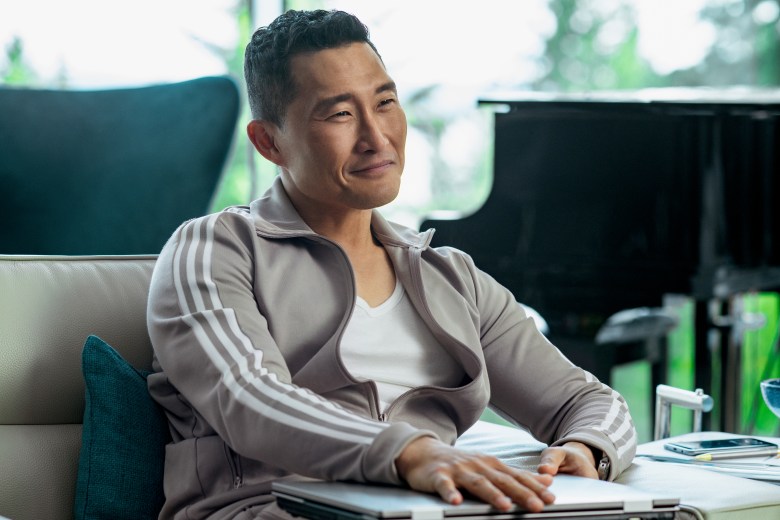 “I’ve met several Brandon Chois throughout my life, some of them in my personal life, and some of them on sets,” said Kim. “He wasn’t a hard character to find, and there are a lot of us who are self-obsessed, focused on work, and consider everyone else orbiting their sun. I started from there, and just tried to think of him as someone who makes work the priority… and everything else would come after that, including, unfortunately, his girlfriend.”

“Always Be My Maybe” joins the recent wave of Asian-American-led romantic comedies such as “The Big Sick,” “Crazy Rich Asians,” and “To All the Boys I’ve Love Before.” Wong, Park, and Golamco crafting the story behind the scenes is one of the reasons why the Asian representation is so strong onscreen and yet is never explicit. No one discusses the state of being Asian-American in the movie. They just are. The movie is full of Asian faces, shared moments over dim sum, bubbling pots of kimchi jigae, and everyday cultural practices that faithfully depict the Asian-American experience.

“One of the things I’m most proud of in our movie is Marcus’s relationship to his dad (James Saito),” said Wong. “That’s something I feel like you have never ever seen in a romantic comedy. That’s something that I’ve witnessed in my life, growing up in San Francisco and seeing all of these American-born dads who are very blue-collar and they’re their son’s friends.”

Park noted one scene that features the Souls of Mischief song “93 ’Til Infinity” as well as another detail taken straight from his life. “That song resonated with us and really told the story in a lot of ways, so that was written in the script,” he said. “Also, a lot of the paintings in the Kim house were paintings that my mom actually made that we just recreated. I went to my parents’ home and took photos of the paintings, sent them to production.” 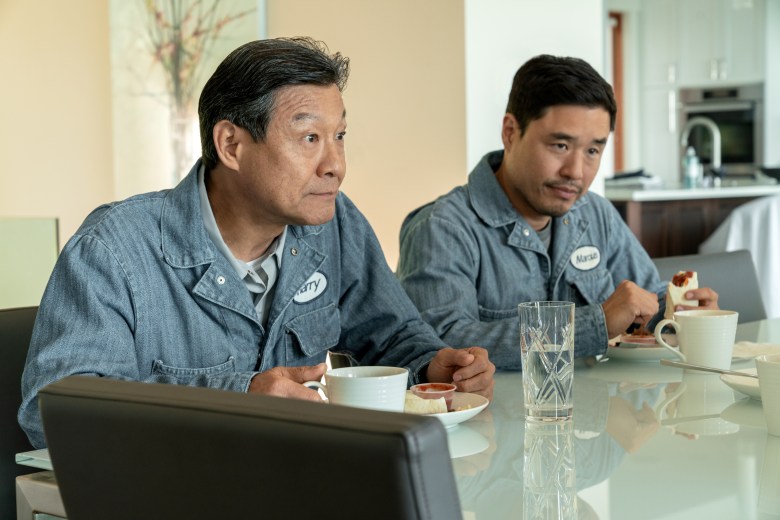 James Saito and Randall Park, “Always Be My Maybe”

These specific details create a universal story about relationships and personal fulfillment without resorting to stereotypes or over-explaining. This balance comes from having Asian-American creatives who are telling their own stories. “It’s definitely a privilege to have a lot of agency over the material and the project, but it’s also a lot of responsibility because if anything goes wrong, everyone’s going to point their finger at you,” said Wong.

Park added, “Stand-up is the epitome of controlling the narrative, more than anything, because you’re doing everything. Whereas this is more collaborative. For me, the lesson out of this experience, or the reminder for me, is that it’s best when you work with people you trust and people you like. That way, yes, it is collaborative, but you’re all looking out for each other, and making sure that the story we want to get told will get told.”

Daniel Dae Kim knows this feeling well. He famously left “Hawaii Five-0” and started producing, which led to the creation of ABC’s “The Good Doctor,” based on a Korean format. Coming on to “Always Be My Maybe” continues this advocacy of Asian-told stories.

“It’s the first time I’ve ever walked a yellow carpet, and that in itself is really meaningful,” he said. “It was nice to see the community come out and support. It was like that for ‘Crazy Rich Asians’ too. For ‘Crazy Rich Asians,’ I flew out from Hawaii just to attend the premiere because I wanted to support them and the cause. It was nice to see that reciprocated here.

“I’m glad that this wave is happening and glad to be a small part in it, because frankly, that’s the only way change will happen. One person does not a wave make, and it takes a concerted movement to effect lasting change,” he added. “So, if we look back on this time, and people think of me as having something to do with it, I’ll take that as a really big compliment.”

”Always Be My Maybe” will be released Friday, May 31 on Netflix.