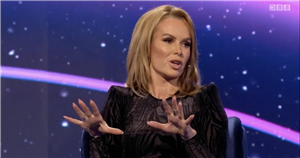 Amanda Holden has left fans of BBC lip syncing show I Can See Your Voice in shock as she flirted on-camera with a singing contestant.

Mexican Idol, real name Hector Godoy, was outed as a bad singer on Saturday night's episode of the singing show.

But things definitely weren't all bad for him, as Amanda wouldn't say no to a drinking date as she labelled him a "bear".

Claiming to be a member of a boyband, Amanda wasn't sold on his singing prowess at first.

"He's a performer. He would definitely be someone I would go out and have a cocktail with. I just know who he is," Amanda said.

And later, presenter Paddy McGuinness pointed out after Hector slaughtered his song: "Well, you're not a boyband member."

And Hector replied: "No, but I am a bear!

"And I will take you out for a drink whenever you want!" he added to Amanda.

Comedian Jimmy Carr interrupted: "Eh, what about me?"

"You can come too, girl!" Hector grinned back.

Viewers were similarly enamoured with Hector, with one writing on social media: "Well Mexican Idol can't sing at all, but I LOVE HIM!"

Another added: "He's a bear and that accent is ooh."

And another Twitter user wanted to get in on the plans, as they posted: "So can anyone join Amanda, Hector and Jimmy for cocktails? Bring my best lady Alison Hammond and it would be a hilarious night!"

Amanda later shocked fans by admitting she was a fan of heavy metal band Metallica on the show.

"@AmandaHolden just watching 'I Can See Your Voice' and was taken aback by your comment about liking Metallica – what's your favourite song?" one scribbled.

Another typed: "Turned on to BBC1 to hear Amanda Holden say she's a fan of Metallica!"

While someone else wrote: "@AmandaHolden did you just confess to being a Metallica fan? I love it!"

It's far from the first time Amanda has flirted with someone on the BBC talent show – earlier in the series, she asked for a stripper's number in front of the cameras.

The singer – nicknamed Acrobat – admitted he was a Butler in the Buff in his real life.

And as he chatted to Paddy after his blisteringly bad performance, Amanda quickly interjected: "Do you have your business card with you?"

"Do you want it? I'll give you my number!" the contestant grinned.

"Slip it to Paddy on the way out!" Amanda said with a cheeky wink.