Ant and Dec were back together to mark the return of Saturday Night Takeaway. They revealed the show would be closed by girl group The Pussycat Dolls as they were back to perform their latest single React, alongside a medley of some of their biggest hits. However, the hosts joined in with their performance as they censored the group after previously warning them not to wear anything “too risqué” earlier in the show.

ITV viewers were delighted to see the return of the Saturday night show as they had lots in store for those watching at home tonight.

The Pussycat Dolls were on hand to perform a sensational medley this evening after Ant and Dec had previously issued them a warning earlier in the show.

The hosts referred back to their performance on The X Factor where they had originally announced their reformation.

Dec replied: “I love The Pussycat Dolls but did you see them on The X-Factor, raunchy is not the word. They were practically wearing their underwear and that was in November! 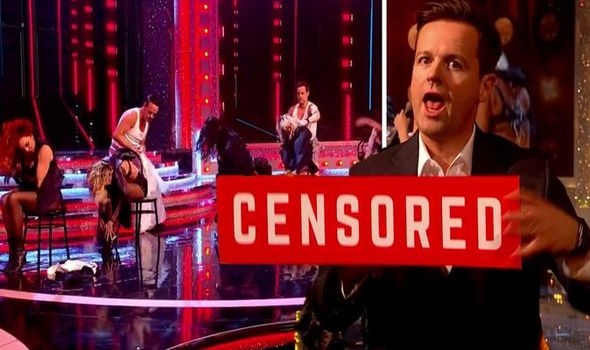 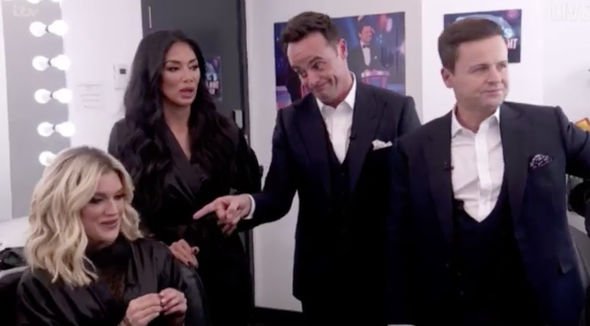 Dec joked: “Not just the kids, but the dads as well. Three men were taken to hospital with breathing difficulties on the X-Factor.

“Simon Cowell has still not fully recovered, he now looks shocked all of the time,” he added.

His co-host stated: “Look if you’re worried, why don’t we knock on the door and have a word with them. Come on, they’re just here, come on.

As the pair were greeted at the dressing room by lead singer Nicole Scherzinger as the group were dressed in silk black robes. 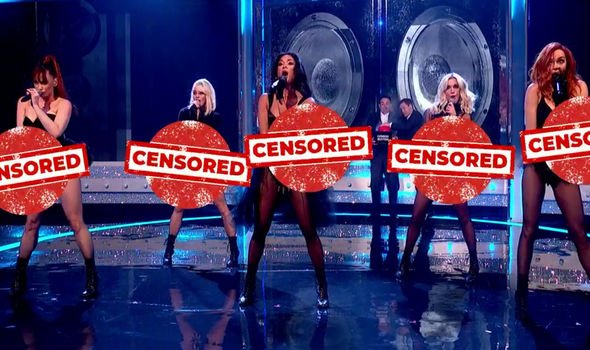 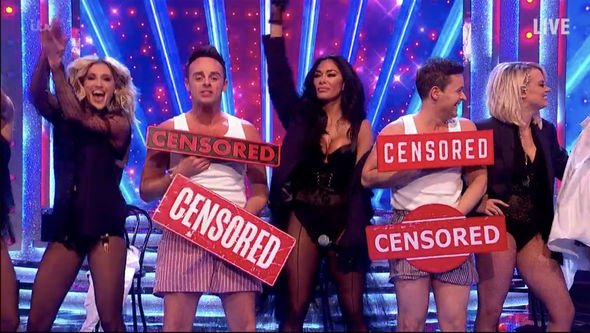 “Girls, it’s great, it’s super great that you’re performing at the end of the show shortly, you know we’re big fans. But we saw a bit of you on the X Factor.

“A bit? We saw the lot, let’s be honest, and that’s why we’re here. Please, tonight, just for me, could you make sure the outfits aren’t too saucy, nothing too risqué.”

The group returned for a medley of some of their biggest hits whilst including their newest single React.

Ant and Dec seemed to use the opportunity to make fun of those who had previously complained their X Factor performance last year was too raunch.

The memorable performance saw them donning leather catsuits as the hosts made a surprise cameo to “censor” the group.

They ran onto the stage with a censor button with the pair eventually stripping off their suits to give the girls their jackets to cover up with.

Some viewers were left unimpressed as they claimed the duo had “ruined” the much-anticipated performance this evening.

One wrote: “Ant and dec just ruined the performance of the @pussycatdolls  #SaturdayNightTakeaway.”

WTF was that? Was really looking forward to seeing @pussycatdolls on #SaturdayNightTakeaway but @antanddec. Completely ruined it, it wasn’t even funny it was just annoying…,” asked another.

A third said: “What was the point of getting Pussycat Dolls on and just ruining their whole performance? Watching #SaturdayNightTakeaway was sooooo annoying.”

However, many fans loved their meddling in the performance this evening, calling it the “funniest thing”.

Another echoed: “Actually crying at @antanddec trying to cover up the Pussycat Dolls #SaturdayNightTakeaway.”

A third fan commented: “Love how Ant and Dec are taking the piss out of those who say the pussycat dolls performances are inappropriate #SaturdayNightTakeaway.”

Another noted: “Don’t usually watch this but @antanddec censoring @pussycatdolls was pure Morecambe and Wise – actual laugh out loud telly#SaturdayNightTakeaway.”

Saturday Night Takeaway returns next Saturday at 7pm on ITV