Antiques Road Trip is currently airing a new season and it’s perfect timing to take a look back at some of the most iconic moments of the show. Back in 2012, BBC experts Charlie Ross and James Braxton were given a budget of £200 to buy a selection of antiques and collectables with the hope they would make money at auction. And at their first auction in Buckie, Scotland, a damaged Staffordshire elephant attracted online interest and sent Charlie’s profit through the roof. With the item originally bought for a measly £8, he sold it for a whopping £2700.

Antiques Road Trip voiceover said: “With one lot each still to go, Charlie is only £7 ahead.

“Next up, it’s his Staffordshire elephant and the auctioneer thinks it could go for a couple of hundred!”

The auctioneer started with: “£80 is online,” which was 10 times what Charlie originally paid for it. 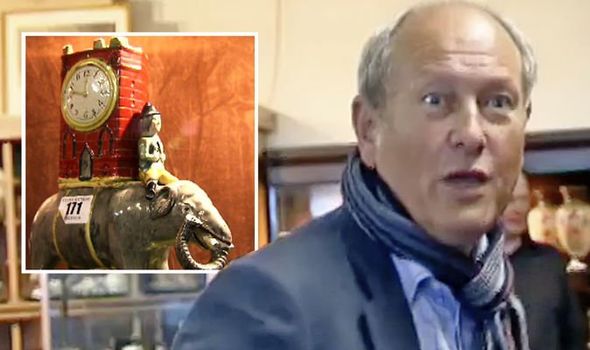 “£140 is on the phone,” the auctioneer revealed and the voice-over explained: “This is getting really interesting, there are no more bids in the room but the phone and internet bids are really picking up!”

The bids then reached £600 and £650 and the expert remarked: “Are you hearing this? This is ridiculous!”

Realising how the game worked, James commented: “It’s all over.”

“I fear my Road Trip is already over,” James added, admitting defeat.

“Never, in the history of the Road Trip have we ever had a sale like that,” the voice over confirmed.

In the end, Charlie made a profit of £2692 for the damaged Staffordshire elephant.

Charlie previously spoke about this moment and how tricky it was to find a good item – putting it down to sheer luck.

“The antiques were stored in a converted chapel and an outhouse. James and I tossed a coin to see who should go where, and he got the chapel while I headed for the outhouse,” he said.

“I knew as soon as I saw him he was something special. I picked him up and looked at the wonderful detail.

“The price tag was just £12, although I knew this elephant was worth hundreds of pounds.

“But I wasn’t thinking about the profit I would make; all I could look at was the tiny figure sitting on top of the elephant. He was so charming – he seemed to be calling out to me,” Charlie added.

Despite it being £12, Charlie felt he “still had to haggle” to lower the price.

As for who bought the elephant, Myrna Schkolne from California was the successful bidder and she had been looking for this elephant for 25 years.

“I saw this elephant on the website, and it was love at first sight,” she said and admitted to getting up at 5am to bid over the phone which “took ages”.

Despite the price she paid, Myrna felt a “winner” as “both [Charlie] and [her] were happy” with the end result.

This isn’t the biggest profit Charlie has made, the year before, he auctioned a Ferrari for £14 million, but “the excitement created” by the elephant in the Antiques Road Trip auction “beat that”.

“There was a huge buzz in the auction room, and when the hammer went down, there was whooping and hollering – not least from me,” the Daily Mail published.