Bachelor in Paradise: Who got engaged, and who was left hanging? 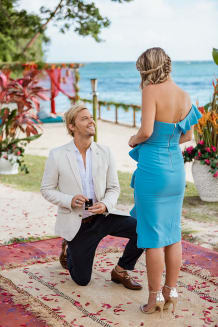 Sam proposes to Tara on Bachelor in Paradise.

If Sam had any doubts about Tara's feelings, he was soon reassured.

It's a far cry from the first episode, when Tara vowed that Sam would never get her rose. This was a result of him coming off like a goofball on Sophie Monk's season of The Bachelorette. Not helping matters was his "frullet": a mane of blonde hair fashioned into front-facing mullet.

"He'll have to get rid of it for the wedding; something more clean-cut would be good," she laughed. But the strength of their bond, she believes, lies in the fact they don't want to change each other.

Having spent months on a tropical island, followed by months of "secret" dates to avoid paparazzi, Sam is aching to do "normal stuff" with his fiance.

"I know it sounds weird, but I just want to go to Coles with her," he said. 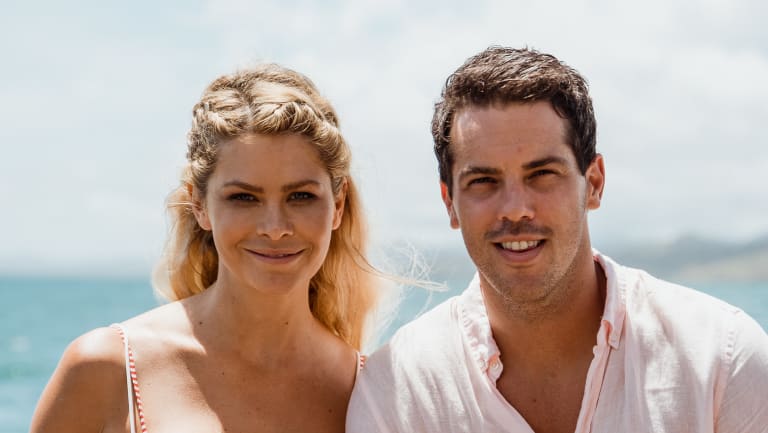 Has Megan ended things with Jake?

Megan and Jake, in contrast, didn't even complete the "commitment ceremony" producers had thoughtfully organised for them.

This left Jake even more confused about where he stands. Will he now initiate a frank and open-hearted conversation with Megan? Or simply scour her Instagram posts for cryptic clues? 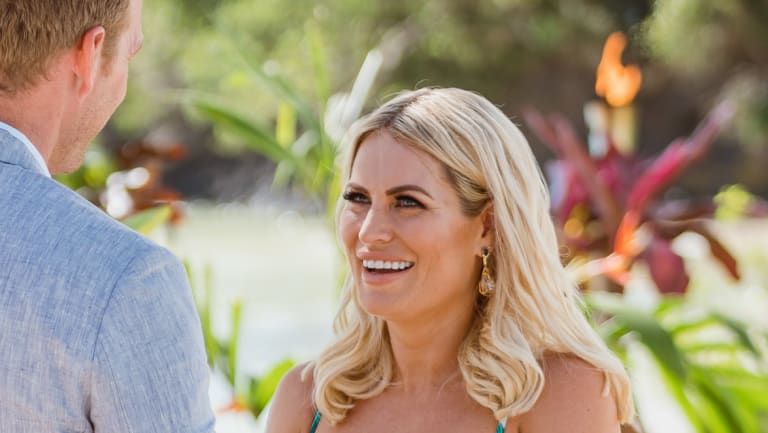 Jarrod told Keira he loves her.

No one could accuse Jarrod, however, of prevaricating.

The last we saw of him, he was being tearfully dumped by Sophie Monk on a Fijian beach, then chased across the sand by a Channel Ten cameraman.

It's unclear if Jarrod ever made it back to Australia, or if he simply eked out a Castaway-like existence in the rainforest before stumbling upon the new series.

Either way, this was good news for Keira: a woman who practically climbed out the womb in a cocktail dress and smoky eye shadow. With an innate grasp of what reality producers need, she ensured maximum screentime for herself.

"You've messed with the wrong person!" she declared at one point, dialling up the outrage for the camera's benefit. "Mark my words! You'll be sorry!"

Keira proved too much for former bachelor Richie Strahan – but a perfect match for Jarrod, a man whose emotions can be accurately gauged by the colour of his head. (Judging by the shade of puce he turned in response to Keira's provocations, he's found his soulmate.)

In the beachside commitment ceremony, after an extended pash, he laid it on the line.

"I've had my heart broken, and I needed to know if I could ever fall in love again," he said. "Getting to know you has opened my eyes to a whole new world of happiness.

"I feel honoured to call my girlfriend. Keira Jane Maguire, I love you."

"You haven't made me feel judged, and that's all I've ever wanted from a man," she replied. "I love you."

Rings were traded, with Jarrod escalating things by describing Keira as his "future wife". Neither was forced to stagger along the shoreline in formal evening wear, as per last year's Bachelor finale. 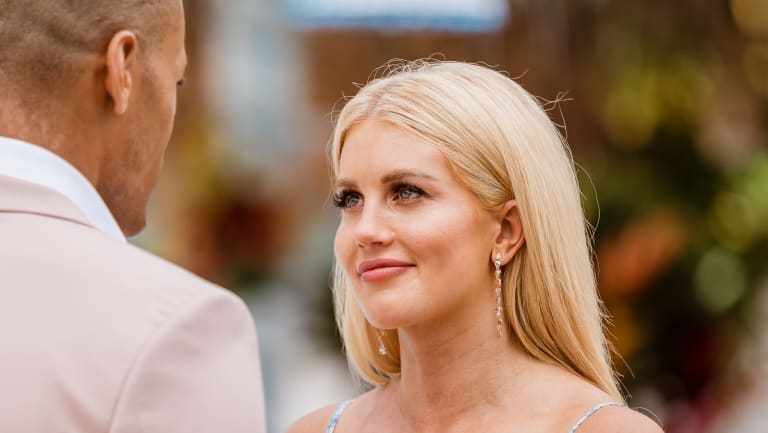 Grant didn’t propose, as Ali had hoped. Instead, he gave her a commitment ring.

As for Ali and Grant?

"What this means is that I can always seee you," Ali said, slipping her ring on Grant's finger. (Is this a gesture of affection or a warning?)

"I will spend the rest of my life with you," he replied. "I have something for you."

Beaming, she extends her hand, waiting for an offer of marriage. She's somewhat thrown to get a commitment ring instead.

Perhaps its for the best. After all, Grant proposed to another woman in a US season of Paradise. Obviously, it didn't pan out.

In a surprising twist, Ten told viewers that Ali and Grant are over – and she will search for love again, as the star of Australia's next season of The Bachelorette.