Bachelorette Recap: OK, But Did Abraham Lincoln Get a Rose?! 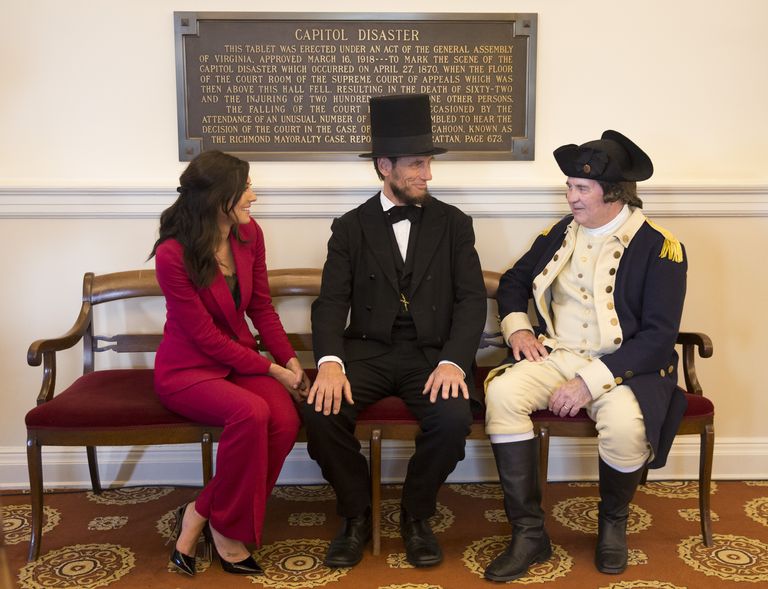 Because she’s been there and done that, literally, former Bachelor contestant/tear fountain Ashley Iaconetti is recapping this season of The Bachelorette for Cosmopolitan.com. And just FYI, she’s one of the franchise’s biggest success stories when it comes to love now too! With insider insight as well as a clear eye for what’s going down both in front of and behind the cameras, read on for her thoughts.

I’m from Virginia! (Great Falls, VA — 30 mins outside of D.C. if you’re curious.) It’s a great place to grow up, but I was at first unconvinced that it would be a great Bachelorette location. And look, I still don’t know where the expression “Virginia is for Lovers” came from, but I’m sure the state’s tourism board is super happy with this episode.

Jason gets the week’s first long overdue one-on-one date — he and Becca go to an Edgar Allan Poe museum (except, um, I thought Poe was moreso a Baltimore resident?) and then an “unhappy hour” for drinks with people who celebrate death. Great way to put a couple in the mood, producers! To lighten that mood, then, Becca then takes Jason to a regs bar afterwards and surprises him with some of his friends from home. Jason is so thankful that Becca arranged this for him, as if she had booked their flights herself! Newsflash: she did not.

Becca likes that she can imagine her group of friends hanging out with his group of friends, while Jason tells his dudes Becca has everything anyone would want in a life partner. I’m calling it again, Jason is this season’s end game dark horse! Later at dinner, Jason tells a story about seeing his grandfather’s struggle with Alzheimer’s; in response, Becca opens up about the loss of her father for the first time this season. She feels comfortable being vulnerable with Jason — and he feels the same with her. He gets the date rose.

Sweet, luscious-locked Leo get the other one-on-one, and is there to not only listen to her concerns over this week’s messy debate group date (we’ll get to it, don’t worry), but distract her. We’ve reached the point of the season where The Bachelorette has got a handful of good guys and only a couple of (mostly) entertaining fools left. It makes you wish the lead could pick a couple of guys to date in real life, not just one — or at least hand some off to her girlfriends. I guess the later is Bachelor in Paradise. Thanks, Kaitlyn!

We’ve reached the point of the season where The Bachelorette has got a handful of good guys and only a couple of (mostly) entertaining fools left.

This classic, classy dinner-and-dancing date feels like Beauty and the Beast, but the rose Leo gets at the end of the night isn’t losing all its petals thanks to a witch’s curse. He’s self aware, has a dry sense of humor, and hasn’t been taking the experience too seriously (in a good way). If you had asked me a couple of weeks ago I would have told you I was surprised he was still getting roses, but I’ve come to really like Leo. I still don’t see him making it to hometowns, but I’m glad he had time to showcase his personality and his oyster shucking skills.

And OK, the group date — it’s the first that captures my attention in a while, because it’s not a physical activity, it’s all about articulating feelings and talking through an argument. These are important life and relationship skills! So then, there’s a “Becca-lection,” in which the guys have to answer questions about their Bachelorette journey thus far, and it’s actually a constructive way for Becca to learn about them. It’s not about who can run through mud fastest or chop wood the best.

Garrett, Blake, Colton, and Wills all pass this verbal test looking like JFKs next to Lincoln and Chris’s sweaty, flustered Nixons. Lincoln and Chris are at each other’s throats in particular, because Lincoln had allegedly called Chris a “fat-fuck” off-camera. (Chris explains that he used to be over 300 pounds, and so the comment really hurt.) If Lincoln said that, he was extremely rude and insensitive — but, as we saw last week, Chris is really bad at keeping his cool under pressure. He handles this week’s drama just as poorly, getting in a public fight with Lincoln at the podium in front of the Governor of Virginia. Virginia is not for haters, y’all!

Things worsen at the cocktail party later in the evening, when Lincoln insinuates that Chris has become a physical threat in the house — so much so that Connor had apparently switched bedrooms out of fear that Chris would harm him. This is almost certainly another exaggeration designed to brew up the conflict Lincoln’s decrying, but the way Chris handles the situation, it almost seems like the claim could be true.

And the whole meltdown culminates after Chris finds out Leo landed his one-on-one date rose — having cut short a cryptic (creepy?) letter he’d been writing Becca in a dark room somewhere, he goes to talk with her in-person at her hotel. He tries to make it clear to her how strongly he feels about their future, but the desperation and simmering hostility is all sorts of unpleasant. Becca basically tells him she’s not into it and asks to walk him out. That becomes an argument in itself! And Chris leaves cursing.

I know I just talked about the show’s late-game elimination process yielding hot prospects for Paradise, but Chris is one of the cast-offs you tell your girls to watch out for.

The pre rose-ceremony cocktail party is canceled as an emotionally-drained Becca has already made up her mind. No surprises, then: Lincoln and Connor go home.