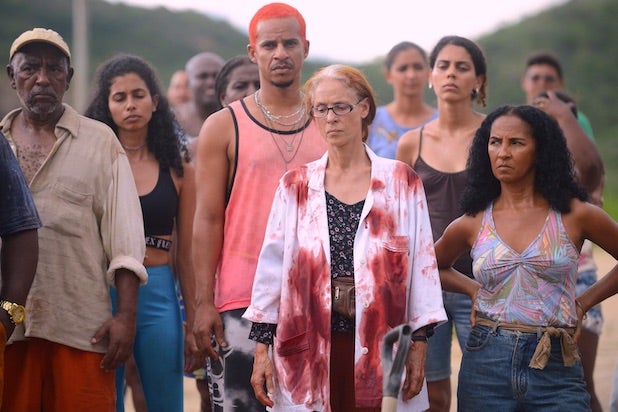 On one level, you could take Kleber Mendonca Filho and Juliano Dornelles’ “Bacurau” as a serious political work about the exploitation of rural communities, the callous indifference of government and the damaging role of America around the world.

Or you could forget about that stuff and take it as a garish, bloody shoot ‘em up, an exercise in the Western genre where the wild west is actually northeast Brazil and the rising body count tends to obliterate whatever thoughtful points the film’s co-directors may be making.

In fact, “Bacurau” is all of those things at once. It makes points about community and exploitation, and then it splatters those points with blood, sets them to blasting sci-fi music and dares you to remember what those points were in the first place. It’s disturbing and messy, a fever dream for a disturbing and messy time in Brazil. And occasionally, it’s a lot of fun, too.

“Bacurau” made its premiere at the Cannes Film Festival — and so did Mendonca Filho’s last film, 2016’s “Aquarius,” when he and his cast held up signs on the festival’s red carpet denouncing the removal from office of left-wing president Dilma Rousseff as a “coup.” Since then, the government has veered further to the right with the election of Jair Bolsonaro, who has launched a crusade against what he calls “cultural Marxism” in the arts.

Given that atmosphere, it’s hardly a shock that Mendonca Filho, collaborating with his longtime production designer, Dornelles, would have serious things on his mind. What’s surprising is the way he’s chosen to express himself, in a far pulpier manner than his previous films.

“Aquarius” focused on an elderly woman (Sonia Braga) who is the last resident of an apartment building targeted to be torn down by a construction company looking to build a modern high rise, while Mendonca’s previous film, 2012’s “Neighboring Sounds,” quietly observed the anxieties of urban living.

But there’s not much quiet or understated about “Bacurau,” which screams “genre movie” from its opening credits. It starts with the funeral of a 94-year-old woman in the remote town of Bacurau, but even that sober moment is interrupted by a drunken tirade from a local doctor, Domingas, played by Brazilian icon Braga. Meanwhile, there’s a flying saucer hovering overhead from time to time – or is it a drone?

The music suggests UFOs, but one character says it’s a drone, and he’s right. But the drone is there for a purpose more sinister than an alien invasion because it turns out that a group of Americans are heading to town for some gruesome sport.

One underlying theme, in a way, is the richness of small-town life that is deemed dispensable by outsiders; another is the ability of marginalized communities to stand up for themselves. But when the filmmakers up the body count and throw in the psychotropic drug that seems to be a local specialty, what you get is a feverish Panavision bloodbath that delights in the trappings of genre.

It also delights in an array of colorful characters, from Braga’s doctor to Udo Kier’s calmly psychopathic “tour group” leader to Silvero Pereira’s gay gangster Lunga. They all clearly have a blast chewing the scenery as their directors have a blast staging this gleefully violent exercise.

Now, what was the point again?