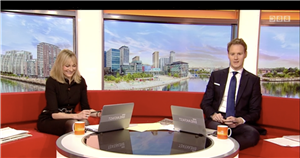 On Monday’s show, Dan opted to wear a navy blue tie with a black suit jacket, while his co-presenter Louise Minchin donned a black dress.

Dan was branded "shocking" for the decision.

The UK is currently in an official national period of mourning for a week following the death of Prince Philip.

In accordance with guidelines, flags will fly at half-mast and newsreaders should wear black clothing.

The period of grief will last until the Duke of Edinburgh’s funeral on Saturday, April 17.

And the Royal Family will observe two weeks of Royal Mourning, only carrying out engagements if appropriate.

"Where is Dan Walker’s black tie!!!" one posted.

Someone else wrote: "Why are presenters still not wearing black ties! We are in 8 days of official mourning during which one protocol is public service broadcasters must wear a black tie."

Another social media user penned: "Dan what don't you understand about a black tie not blue" with an eye-roll emoji.

A fourth added: "No black tie @mrdanwalker? Oh a dark blue one'll do…"

Daily Star has contacted a BBC spokeswoman for comment.

When the news of Prince Philip's death broke on Friday, BBC newsreader Martine Croxall made headlines for switching into black clothing mid-programme.

She had to change outfits live, shifting from a brown long-sleeved dress and gold necklace into a black blazer.

And TV schedules experienced a shake-up as BBC and ITV programming was suspended to show back-to-back royal coverage.

Operation Forth Bridge is the codename given to the plans put in place for the Duke of Edinburgh’s death.

It is so named after the Edinburgh railway bridge, a popular landmark across the Firth of Forth.

The plans detail what procedures must be carried out in the event of the Duke of Edinburgh’s death, which includes newsreaders being expected to wear black while presenting television as a sign of respect.

According to Edinburgh Live, plans put in place for Queen Elizabeth II have been dubbed ‘Operation Unicorn’.

The BBC has been inundated with complaints over its coverage of Prince Philip's death – so much so that it opened a dedicated complaints form on its website.

Telly viewers weren't pleased to hear that shows including EastEnders, the MasterChef final and more had been cleared from schedules on Friday.

BBC Two reportedly lost a whopping two thirds of its audience, with only 340,000 tuning in at any time between 7pm and 11pm.

Channel 4's Gogglebox was the most watched programme on Friday April 10, according to Deadline.

More than 4 million people tuned in at 9pm.